A legal passage to India

As corporations and law firms begin to offshore work to India, the legal outsourcing industry is gearing up for a boom.

Four years ago, Russell Smith, a stressed-out lawyer from New York, visited Mysore, 140 km southwest of Bangalore, for a yoga course. Three months on, he fell in love with India, and hired an assistant to work on his US practice, while refining his shirshasana, a yoga posture . Since then, the two-person outfit has grown to SDD Global, a 32-person company that wants to be a 100-person unit, with operations based in Kuvempu Nagar in south-western Mysore. Today, Hollywood biggies like 20th Century Fox, Sony Pictures and Universal Studios get some of their legal work done out of Mysore, thanks to SDD.

About 470 km away, at the Ascendas International Tech Park in Chennai, 70 lawyers are browsing through a sea of legal documents for clients that include a handful of American and British multinationals. The lawyers work for Cobra Legal Solutions, a three-year-old New Yorkheadquartered legal process outsourcing (LPO) company. One of Cobra's largest clients is personal computer giant Dell, which does its litigation document reviews and M&A due diligence work out of Chennai.

Meanwhile, in Mumbai, Thomson Reuters announced last fortnight that it was acquiring Pangea3, one of the largest LPO firms in the country. Pangea3 has over 650 lawyers on its rolls, most of whom are based in Mumbai and New Delhi. 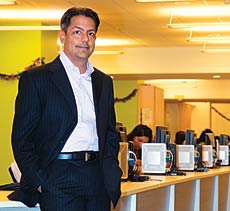 Sanjay Kamlani
So why are the likes of Dell, Sony Pictures and Universal Studio offshoring legal work to India? And why is one of the world's largest information and research providers looking at acquiring an LPO company in India? The answer is simple: cost. "There is a tremendous incentive for American companies and law firms to hire LPO companies in India," says Smith, President, SDD Global. "They can obtain quality legal services for a tenth of the cost, and office space in Mysore is as little as 1/43rd the cost of comparable space in the United States," he adds.

Consider these numbers. "A document review in a New York law firm will cost $75-80 per hour; in Ohio, it would be $40-50. In India, we do the same for $11-12," says Sakthivel Venkatraman, Managing Director for India Operations of Cobra. It is hardly surprising then that more than 85 per cent of all legal processing vendors, either primarily or exclusively, deliver services out of India, even though most of them are headquartered in the US. India has over 30 legal outsourcing firms, employing about 12,500 lawyers.

And the size of the Indian industry? "A billion dollars," proclaimed Sanjay Kamlani, Co-CEO of Pangea3, at a global industry conference held in Noida in November. It was a number that not everybody agreed with. "Perhaps $400 million is more like it, if we were to look at just pureplay LPO work done out of India. Perhaps, if you included back-office work, too, then it could be a billion dollars," says Ganesh Natarajan, President & CEO of Chicagoheadquartered Mindcrest. Kamlani, though, says his estimate of a billion dollars includes the captives of American corporations like Citigroup and Honeywell, which do legal work out of India. There might be various points of view on the size of the industry, but everybody at the conference was clear about one thing: growth is here to stay.

Kamlani is very upbeat about headcount growth. "We doubled our headcount to 650 this year and we see that number doubling again to over 1,300 lawyers in another year," he says. Mindcrest's Natarajan sees headcount going to 2,500 lawyers in 3-4 years from 600 now. Even a smaller player like Cobra has been scouting for talent on campuses, and expects headcount to more than double to 150 by March 2011.

Sceptics might argue that the recent boom in the LPO industry is short-lived and can be attributed to the global recession. They argue that as bankruptcies and litigations went through the roof, Indian LPOs got a chunk of the huge legal work that is generated in these proceedings. But, industry folk like Natarajan and Kamlani believe a structural shift of sorts is happening and that the business is at a possible inflection point in terms of growth.

"Earlier, LPOs were getting most of their business from the legal departments of companies that wanted to reduce costs," says Natarajan. "However, since the recession we are seeing more law firms talking to LPOs," he adds. It is a point of view echoed by SDD's Smith. "Law firms, too, are increasing their involvement in LPOs, but mostly at the insistence of their corporate clients," he says.

Also, courtesy of the recession, American law firms are being asked by clients to bid for business on a fixed-fee basis rather than on hourly bills. That has forced law firms to cut costs and, in turn, engage LPOs. "We are now getting work from not just the legal departments of companies but also other departments like human resources," explains Natarajan.

He adds that LPOs, including Mindcrest, are increasingly signing on three- to five-year contracts against the earlier practice of projectto-project work. Another sign of the maturity of the industry is the nature of the work that LPOs are undertaking and the increasing depth of client relationships. Gurgaon-based UnitedLex began with patents support and contract management but has expanded to document review, trademarks support and legal research.

UnitedLex CEO Daniel Reed says companies such as SDD and the one he heads are also trying to move the LPO industry beyond the lift-and-shift business model. "Clients are now approaching us to help them redesign their overall contracting function and provide technology and process design support," says Reed. The company, backed by venture capital from Canaan Partners, has grown to over 550 people.

A pecking order is emerging. Firms such as Pangea3, UnitedLex, Integra and Mindcrest are considered large (with a lawyer headcount of over 500). At the other end are niche firms like Cobra and SDD, with headcounts of about 100. Then, there are the IT services and business process outsourcing, or BPO, players who are eager to make their presence felt in the space. Unlike pure-play LPOs, which sell on the basis of their lawyer teams and legal expertise, these players are looking to use their technology platforms and client relationships.

Take Cognizant, which debuted in the LPO space just two years ago. "We started by reviewing contracts for our financial services clients," says Vipul Khanna, Head of Global Delivery for BPO and KPO. The company has since graduated to regulatory reporting, disclosure-related processes, and anti-money laundering compliance.

Wipro has leveraged deals won by its technology outsourcing units to expand its LPO business, says Robert Unterberger, its LPO Practice Head. It added LPO services to a contract bagged with a multi-billion dollar software company and, elsewhere, it helped abstract thousands of legal contracts for one of the US' largest retailers, which it had initially signed on for a BPO deal.

Bangalore-based competitor Infosys, which entered the space three years ago, is taking a similar tack. "We are transformation partners with one of the largest law firms," says Rahul Shah, AVP and Head of LPO. The unit began by providing business services like finance and accounting support and gradually added services such as prospect research and competitive analysis. It even added an Internet-based contract management tool to its partner's portfolio. Infosys expects its LPO unit to double headcount in the next financial year and add 10 clients in that time.

Considering this kind of optimism, and the fact that India churns out about 80,000 law graduates annually, is this industry all set to hire by the hundreds or thousands in the next few years? Insiders advise caution. Despite the generous supply of lawyers, not all of them are good enough for the industry. "The majority of Indian law graduates are not prepared to handle Western legal research and drafting, even with intensive training," says SDD's Smith. The way out? Months, if not years, of training for recruits.

Reed says training at UnitedLex can extend from at least four to six weeks for simple assignments to up to 36 weeks for more complex ones. Infosys has similar programmes. Pangea3 says that it hires engineers from campuses, including IITs, and trains them extensively to do intellectual property related work. Doesn't hiring from the IIT campuses cost a bomb? "Yes," says Pangea3's Kamlani. "But, our clients pay us a bomb, too."