A unique sense of identity 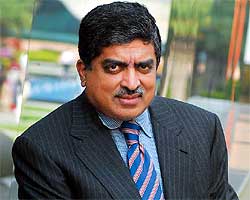 The year is 1977. The General Secretary of the students union of IIT Bombay is burning midnight oil preparing for the institute’s annual college cultural fiesta in December. However, it’s a year in which a cyclone has ravaged Andhra Pradesh, killing thousands and rendering millions homeless.

Many at the Powai campus feel it would be unwise to go ahead with the festival. The General Secretary, however, is convinced that the show must go on. More importantly, he galvanises his persuasion abilities to win over the doubters. The show does go on, by the end of which IIT Bombay is in a position to donate a chunk of the earnings to the cyclone victims.

Teamwork, collaboration and consensus have been faithful companions of Nandan Mohan Nilekani—the dogged General Secretary in the tale above—for four decades now. On July 9, Nilekani will turn up at work for the last time at the Bangalore headquarters of Infosys Technologies, the company he and six others co-founded 28 years ago with seed capital of $250 (Rs 12,000 at current rates).

After seeing the company grow from just the seven co-founders to over 100,000 people and to over $4 billion (Rs 19,200 crore) in revenues, the self-confessed accidental entrepreneur, once called a “passionate democrat” by close friend Ramachandra Guha, is now set to take the next big step in his life when he becomes the Chairperson of the Unique Identification Authority of India.

Can a man who has worked for nearly three decades in and around the IT industry and Infosys take the step up to a public service role? Nilekani himself believes that he has built a new set of skills over the last decade that will help him in his new role. “For 10 years I have been on the fringe of public bodies and initiatives including the Bangalore Agenda Task Force (BATF), the Jawaharlal Nehru National Urban Renewal Mission, the Knowledge Commission, the National Skills Mission and Karnataka’s E-governance Mission,” he says. “People are aware of my interest and capabilities in public service and policy.”

As Chairman of the BATF, Nilekani was in the thick of things again, building consensus across politicians, bureaucrats and corporates on the ideal path to fix brand Bangalore. “My new role involves a lot of consensus building across local, state and union government bodies and I must be prepared to build these bridges,” says Nilekani.

Transitioning from India Inc, where the pace of decisionmaking is relatively rapid, Nilekani will also have to quickly get acquainted with a different pace of life in the government. “Results in the government are beyond the measuring rod of money,” says Srivatsa Krishna, who has worked with Nilekani in the Andhra Pradesh government, “It is impossible to put a value on say the improvement to the external habitat due to the easing of traffic congestion, or the impact on subsidies due to the existence of a good ID card for every citizen.”

While many people see the Unique ID system as ITdriven issuing of smart cards, people close to its rollout say that technology will be just one part of the overall package. “This is not an IT project but the world’s biggest systems re-engineering, process redesign and linkage-creation exercise,” says Krishna. However, his legacy in IT can be handy, others argue. “Nandan sees technology as an enabler and not as the fix-all cure for public problems,” adds V. Ravichander, Chairman & Managing Director, Feedback Consulting, who worked with Nilekani at BATF.

Besides the fairly routine IT component, Nilekani will need to figure a way of creating a database of over a million people, ensuring it is accurate and giving the correct data out to citizens. To understand the scale of the problem, Nandan points out that the US Government will spend $19 billion (Rs 91,200 crore) on just an electronic health records system, while a much smaller country like the UK is yet to come to grips with its own ID system.

One of Nilekani’s biggest challenges, say observers, is adapting to the radically different work culture within the government. At Infosys, Nilekani is used to working with reams of data and a team that can meet tough deadlines. This won’t always be the case within the government. He can expect information voids, incomplete processes and (relatively) slow-to-react officials bogging down plans for a national roll out by 2011. To try to work around some of these hurdles, observers suggest that Nilekani hire the best hands available within and outside the government, to catalyse the execution of the project. “Nandan has one of the most powerful rolodexes in the world (and) is a tough negotiator,” quips Krishna.

Nilekani may also discover that power outside the corporate cocoon takes on a totally different hue. Co-Chairman of Infosys, which is a vertically-structured entity like any corporation, would have made him the second most-powerful person at the IT major, but being Chairperson of a government-led initiative may not necessarily mean that he is numero uno there.

While Nilekani and his wife Rohini are preparing for the intricacies of running two active houses—both have thriving interests in philanthropy, which keeps them tied to Bangalore—he isn’t underestimating the scale of this project. “The professional upside is huge if this project is executed well,” he admits. “But, this is a full-time job with great benefits for the country.” While he’s built some complex systems during his three-decade stint at Infosys, the Universal ID card project will perhaps be his most prestigious contract yet.