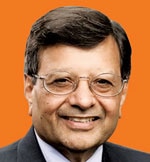 Q. What made you write your autobiography now?

A. I have had such fascinating encounters that I was joking about writing a screenplay about the Americanisation of 'Jag', my nickname. The day I landed here I went to buy a formal white shirt - till then all my shirts were rather colourful - and like any other Indian started bargaining. It was unheard of in the US in the 1970s. But that is today being accepted here. I also have a lot to share about the people I have been fortunate to have worked with.

Q. Who are the people who have inspired you?

A. I first studied about Abraham Harold Maslow's [US psychologist] 'Hierarchy of Needs' in my MBA behavioural class. I just loved it; motivations of people have always fascinated me. I applied the same theory on how institutions go through a similar path of evolution. Take religion. When people struggle to survive, they pray, it then moves to love and affection. As the society and economy evolves, this moves to self-esteem and independence, and eventually it gives way to self actualisation.

This behaviour also manifests at the workplace where organisations move from being feudal to providing a platform to employees for self-actualisation. My interpretation was well-received, including by Maslow himself. I even applied this to the evolution of Communist vis-à-vis the capitalists. In this context I would also like to mention about my mentor Professor John Howard with whom I co-authored the book on buyer behaviour. Peter Drucker's ability to forecast the future has always inspired me.

Q. Whats your view on the Make in India pitch?

A. It has a strategic intent. The world is looking for an alternative to China and companies would want to de-risk their reliance. It could also involve a foreign company making/manufacturing here for elsewhere. This does not compete with domestic industry and has the potential to give us technology or know-how, the way China learnt from these firms.

Q. But is manufacturing the answer?

A. India is resource rich. Way back in 1800s David Ricardo had suggested that nations should concentrate on their comparative advantage. An idea where the British Empire did not focus on producing cotton, but sourced it from India and the US. British mills made textiles that were again sold back to these countries at a premium. India missed the bus when the US wanted India to manufacture; India refused then, influenced by its Non-Aligned Movement. China, however, embraced manufacturing. Today, India is a service-driven, growing economy that is labour-inflationary. We need more skilled labour. Service is not exportable. Be it for service or manufacturing, it needs infrastructure.

Q. Do you see relationship marketing undergoing a sea change?

A. The principle of connection and building a relationship does not change with the change in the platform. If you look at the companies and brands, the successful ones have built that connect with the local community. I call them the 'firms of endearment' . In India, take the case of Tata, Murugappa Group and Hindalco. Wipro's Azim Premji has sought to do the same.