In August 1994, a major fire broke out in the Mumbai office of India Book House (IBH), the publishing company which those days produced the Amar Chitra Katha (ACK) series of comic books and the monthly children's magazine, Tinkle. Though no lives were lost, it was a devastating blow - around 3,000 reference books, three files full of scripts of forthcoming comics and 200 pages of artwork related to them were destroyed. "It still gives me nightmares. But we were at work the very next day and the next issue of Tinkle came out on schedule," says Reena Puri, the present Editor of the series.

The response reflects the resilience of the team that has been producing the iconic comic series, whose 400-odd titles introduced generations of Indian children to their own mythology and history. "ACK is one of those rare brands which have continuously succeeded, not by publicity but by word of mouth from satisfied consumers," says Vijay Sampath, CEO of ACK Media, which now owns the series. Since it began in 1967, ACK comic books have sold over 100 million copies in 20 languages. But it has also had its upheavals and difficulties, the 1994 fire being only one of them. At one stage in the 2000s, it did not come out with a single new title for six years.

The last such upheaval was in March 2011, when the founder-editor of the series, the legendary Anant 'Uncle' Pai, died of a heart attack. Other tremors in recent times include a change of ownership in 2007, when ACK Pvt Ltd - later known as ACK Media - an unknown company formed by two youngsters, Samir Patil and Shripal Morakhia, not only bought both the comic series and Tinkle magazine from IBH, but also in 2010, acquired the venerable IBH itself, and made it ACK's distribution arm. A year later, however, Kishore Biyani's Future Ventures began acquiring shares in ACK Media, and ultimately gained a majority stake, which led to both Patil and Morakhia exiting in 2012, and Sampath, appointed by Biyani, taking hands-on charge. Vijay Sampath (Left), CEO, and Manas Mohan, COO, ACK MEDIA, at their office in Mumbai
But far from floundering after all these changes, both the company and the ACK series have grown bigger. Since Pai's death, ACK has forayed onto new platforms, and expects to do even better in future.

"Continued investment in branding and marketing has helped ACK retain its leadership and also build its mindshare in new segments," adds Sampath. No doubt, the move is also partly dictated by the times. "Comics in general are not selling the way they used to in their heyday," says Ashesh Jani, partner at Deloitte Haskins & Sells. One of the new platforms is cinema. ACK Media's first filmmaking venture was the animated film Tripura, released on television a few months after Pai's death. In November 2012, it came out with a 3D animation feature Sons of Ram, based on the popular story of Luv and Kush, directed by Kushal Raja and released in theatres. A number of other productions, both animated films and live action ones, are at various stages, and will be released from 2014 onwards. "The focus is on family entertainment and the content extends the positive story-telling values of the ACK's brands," says Sampath. 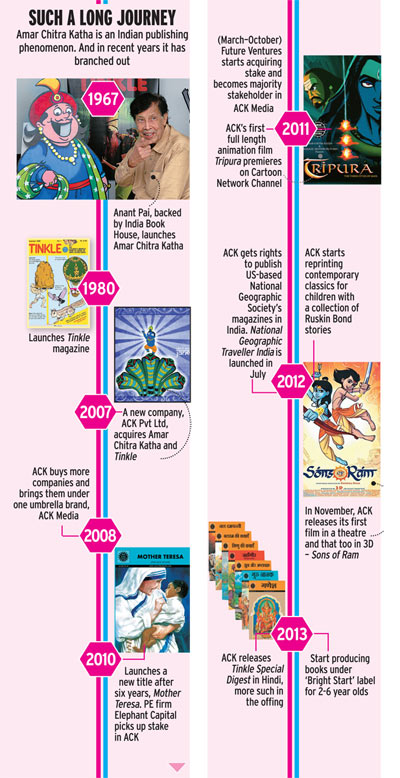 A second new platform will be the digital one - ACK Media will launch its proprietary app on the Apple, Android and Windows 8 platforms later this year to make the comic series available for the first time on tablets and smartphones. It has set up a digital media studio in Bangalore with the latest technology. "At the core is a content convergence strategy where all content will be created for multi-format publishing," Sampath adds.

What are the prospects for these new platforms ? The box office returns of Sons of Ram have been modest, though the film will get a second lease of life after it premieres on television, on the Cartoon Network channel, in April. The online arena too is not exactly easy pickings. "Entering the digital space needs a lot of investment. It should translate into revenues as well," says Smita Jha, Leader, Entertainment and Media practice at PwC India. "There should be enough customers for the products." But print is also getting its share of fresh attention. Moving away from the hoary past, ACK has launched its first series of contemporary classics for children, starting with a collection of short stories by Ruskin Bond.

Senior officials also maintain that publishing in languages other than English will get special attention. A Tinkle Special Digest in Hindi, incorporating the best comic strips the magazine has published since it began in 1980, was brought out recently. "The aim is to rapidly expand this catalogue to offer the best reading experience for millions of Hindi readers," says Sampath. The company also tied up with global travel magazine National Geographic Traveller last July to publish an Indian edition. In March this year, it launched a new line of books to make learning easier for children in the two to six years of age range, called the 'Bright Start' series.

"Pai's death was a big loss," says Jatin Varma, the man who began the 'Comic Con' three years ago, akin to a book fair, at which comic book publishers exhibit their products. 'Comic Cons' have been held in Delhi, Bangalore and Mumbai. "His shoes are tough to fill. But his legacy will guide ACK, I hope."
Tags: Amar Chitra Katha | Comic books | animation

Cheer in a time of crisis