Knock on wood, India is shaping up like our businesses in Japan, Germany, the UK and the US 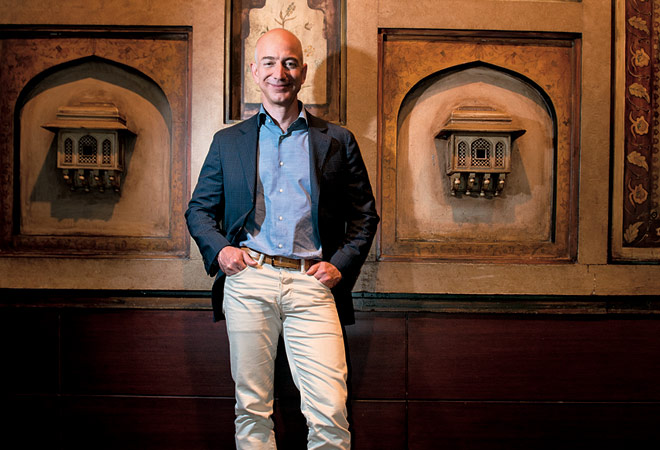 Jeff Bezos' signature guffaw often breaks the seriousness of the conversation, but he gets back to it in seconds. His second visit to India in five years, Bezos, the CEO of American e-commerce giant Amazon, is uncannily timed with the country's festive season. Amazon's India head Amit Agarwal says that the site has already seen a 3.5 times increase in the traffic in the first week of a month-long sale. Bezos's biggest Indian rival Flipkart's Co-founder Binny Bansal says that the "global guy's" arrival shows that the India market has a lot of potential.

And, how. In just more than a year in India, Amazon has built a business where its transaction value has crossed a billion dollars, Flipkart is at about double that rate but took seven years to get there. Bezos says that he has never seen anything like Amazon's growth in India and that he has reset all targets. In an interview to Business Today's Sunny Sen and Josey Puliyenthuruthel, Bezos talks about Amazon's international business, its obsession with customers, his take on operational excellence, people he looks up to, and fiercely contends Amazon has not missed the bus in China. Edited excerpts:

Q. What has changed in India since your last visit here in 2009?

A. Amazon has been in India for 10 years. We started off with an office in Bangalore - a software engineering centre; a place where you could recruit talented software engineers and computer scientists. That has worked out spectacularly well... The main thing that changed was we opened Amazon India a year ago and it is a market place - it makes it easy for small and medium sellers to connect with the digital marketplace, to connect with customers online. A year ago, I would have told you I am optimistic about it. But since we are having the interview today, I can tell you it is already working. As a result of that success, we have increased the investment level. We have great businesses in Japan, Germany, the UK and the US. Knock on wood, this (India) is shaping up to another one.

A. North America has been growing so fast. Part of that is category mix. Our North America business is a couple of years ahead of the international business in terms of new categories.

Q. Does India have the potential to change the international versus North America revenue mix?

Q. Has anybody in the US asked you about Sachin and Binny Bansal (of Flipkart)?

Q. Everybody in the e-commerce business is taking out huge physical ads to popularize their stuff. Isn't it like 1999 (when there was a bubble)?

A. Do you know Mark Twain's famous quote? "History doesn't repeat itself but it does rhyme." So we will see but you don't know. But you do see some signs in some geographies that there might be little bit of a bubble. We will see. I don't know.

Q. What is the big differentiator for Amazon in India?

A. We try to identify what really matters to customers. And then we try to figure out ways. And often those ways have to be localized. But the needs of customers are very similar all over the world. The three big things the customer wants are fair, competitive, low prices; they want big selections so they have choice; and they want fast and accurate delivery. So in every country we figure out what's the best way to deliver those things. 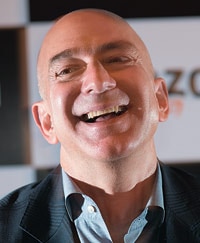 'The three big things the customer wants are fair, competitive, low prices; they want big selections so they have choice; and they want fast and accurate delivery,' says Jeff Bezos.
The particular circumstances are always unique. In India what is really working well for us is helping small and medium enterprises organise their selection to reach customers.

A. It is true all over the world. Let me highlight a few principles we adhere to. The most important one is customer centricity: starting with the customer working backwards. The second one is invention - we like to invent and pioneer and we want to plant seeds that nobody has planted before. The third one is we are willing to think long-term. We are willing to be patient. Those three work together and that combination of things isn't very common. Not many companies have that same approach. The combination of these things leads to earning the trust with customers. So if you want to earn trust the way you do that is under promise and over deliver. It is okay for the fulfilment speeds to be different in certain circumstances but you need to make sure that the customer understands that. You have to make the promise correctly.

What I can tell you is that all over the world, I have probably received similar comments. It is easy to say you are going to deliver things; it is hard to do. So we will see.

Q. What went wrong in China?

I can't agree with [that premise]. Our team in China is doing a very good job?

A. Well, I think we are doing a very good job. I will have to disagree with you on that.

Q. What do you do if you get to know that there is an unhappy customer?

A. We would try to understand what the root cause of the unhappiness is, and that happens everyday. I get emails from customers who are unhappy. The most common cause is that "we didn't deliver the package on time". I call them "staff contacts"? We have tracked them from the very beginning and every year we have been able to reduce the percentage of these contacts. You are never done, you are always improving. There is this divine discontent. You always wake up in the morning saying you can do something better, well, how can we better and what can we do tomorrow to be a little better than what we do today.

Q. This continuous improvement... is it Jeff Bezos or is it a bunch of guys?

A. It's a bunch of guys and it is a part of our culture now. It is a deeply engrained habit in Amazon. Those things about customer first, long term thinking and focus on operation excellence, those are all habits. They are cultural traits, and cultural traits are very self sustaining, because the kind of people who come to Amazon and stay at Amazon like those things. We would occasionally hire someone who comes from a company that is very competitor focused. 'My own view is that most companies spend too much time thinking about the competition, talking about the competition, obsessing over their competition,' says Bezos.
They get to Amazon and are a little bored. They can't get motivated but? if you are not fighting with somebody. The people who really thrive in Amazon have more of an explorer mentality. They want to go down alleys where no one has ever been to, and see what's around the corner. I don't think the other approach is bad, but it's just that it is not ours.

Q. Are there management thinkers or companies you admire?

A.There are so many of them. One of my business role models was always Walt Disney. He for me is symbolic of taking bold bets. He really took some amazing bets in his career, and one of them was very early. He and his brother were partners, and Walt wanted to make full length animated picture and they had only made shorts (movies) and the shorts were quite successful. But the full length movies would need a lot of money and would be a very bold investment. Walt made Snow White which became the most successful motion picture of all time. I like Morita san, the founder of Sony. Right after World War II, Japan was known for low quality clone, copycat products. And Morita set a goal for Sony that it will make Japan known for quality, not just Sony known for quality. What inspires me about that is that he picked a mission for Sony which was bigger than Sony. It is helpful to pick a mission bigger than a company. So for Amazon, we want to inspire others, even other industries who endeavour to be customer centric as we endeavour to be.

Making a choice gets tougher as budget smartphones flood markets