The Cup Runneth Over

"We live only off the money earned from our cows," says B.N. Kodandaram, a farmer in Bhandarahalli village in Karnataka's Kolar district. "They are our primary source of income."

Back in 1978, this son of a farm labourer had only one cow, which yielded five litres of milk a day. But because he was able to sell the milk at a remunerative price, he has prospered. Today, he owns five cows, which produce 55 litres of milk daily. Over the years, with the income from dairying, he has been able to get four sisters married, build his own house and buy 10 acres of farmland.

Where has he been selling his milk all these years? The buyer is the cooperative society of milk producers in his village, of which he too is a member and also the current president. 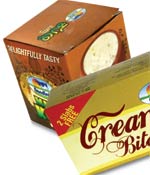 Diversity: Nandini has a wide array of products, including packaged cottage cheese and matka kulfi
The society gets around 550 litres of milk daily from its 63 members and pays a handsome price of Rs 20.40 a litre. The village-level society is one of 1,620 in the district, which are all linked to the Kolar-Chikkaballapur Cooperative Milk Union, which is affiliated to Karnataka Cooperative Milk Producers Federation (known as KMF in short) - the apex cooperative body behind the Nandini brand.

In a pattern similar to that of Amul in Gujarat - indeed Nandini is the second largest milk brand in India after Amul - around 13,000 village-level cooperative societies across the state sell their milk daily to 13 district-level unions headed by the KMF.

Kolar-Chikkaballapur produces 720,000 litres of milk daily, which is about 600,000 litres more than it needs. It is the sale of this surplus milk to other districts and the KMF that keeps this drought-prone region going. 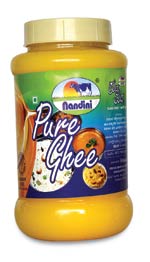 Nandini's Pure Ghee: Nandini produces 1,200 tonnes of ghee a month
"Milk is the only source of income for most homes in our water-starved district," says Kadenahalli Nagaraj, a director on the board of Kolar milk union. "While the water table has been falling, milk production is rising."

There is a concerted drive in the state to increase milk procurement, responding to which Kolar too has itself a target of one million litres by 2013. "Our aim is to beat Amul in milk procurement," says G. Somashekara Reddy, Chairman, KMF.

"There are milk offerings from other players, but the reach and brand value of Nandini is very strong," says brand consultant Harish Bijoor."People commit to this brand because it is a product from a unique cooperative effort, so the quality is maintained and the price regulated."

Click here to Enlarge
Among those won over by Nandini is the retail coffee chain, Cafe Coffee Day (CCD), which sources all its milk requirements in Karnataka and the cities of Chennai and Hyderabad from KMF.

"We switched permanently to Nandini 20 months ago because its quality is consistent and reliable," says Ramachandra Raman, Head, Food and Beverages, CCD.

Rivals such as Heritage, Arokya and Dodla vie with Nandini in its home market, but the KMF brand continues to command about 80 per cent market share, according to independent estimates. The procurement and retail price of milk are regulated by the government. 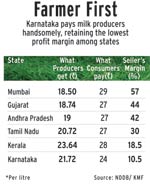 "Eighty-seven paise out of every rupee the consumer pays for milk go to farmers," says Reddy. The district unions retain just Rs 2.28 per litre of milk sold, the lowest in India, followed by Kerala, which keeps back Rs 4.36 and Tamil Nadu, which has a margin of Rs 6.28. In contrast, Gujarat retains the second highest margin of Rs 8.26 after Mumbai at Rs 10.50.

Since the cooperatives procure much more milk than Karnataka requires, KMF also supplies milk to neighbouring states and has diversified into milk products as well.

"We sell 320,000 litres of bulk milk a day to Kerala (sold under the brand Milma," says KMF Director, Marketing, D. Srinath. "We also supply to Andhra Pradesh and Maharashtra during their lean season."

READ:Ethnic food chains on a roll

The KMF manufactures a vast array of milk products from ice creams to processed cheese, from chocolates to ghee. On January 29, it launched additional 59 products, including vermicelli payasam instant mix and coconut burfi.

Of every rupee the consumer pays for our milk, 87 paise go to the farmers.

The most lucrative of them all is ghee. "We earn the highest margin of 30 per cent on ghee, followed by 22 per cent on ice cream and 18 to 20 per cent on sweets," Srinath says.

A major ghee buyer is the Tirupati temple, which picks up about 100 tonnes of the 1,200 tonnes that Nandini manufactures each month.

Innovations are a constant feature. On January 23, Nandini launched toned milk in 100-ml tetra packs, the milk so treated that it does not need refrigeration and lasts around 12 weeks.

"This is a first anywhere in the world," says Kandarp Singh, Tetra Pak MD for South Asia Markets. "The new format will help us reach even the most remote areas of the southern states," says Reddy. Nandini's success has it aiming for much more. It next plans to sell cashew burfi, badam burfi and dry fruit burfi in the US.