From Bad to Worse

Reliance Communications is lurching from one crisis to another with no definite end to its pain. 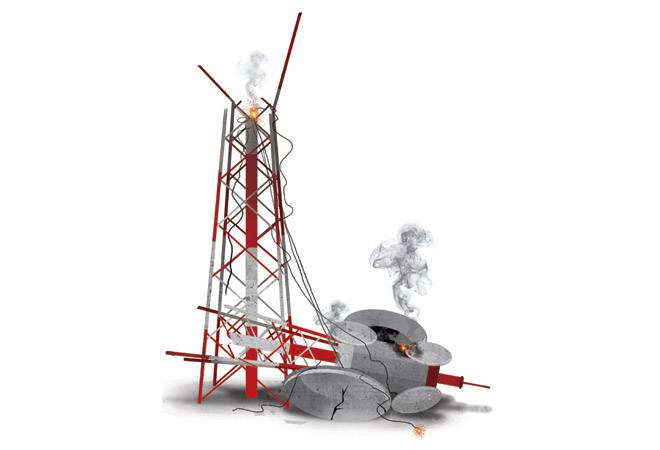 Anil Ambani, Chairman of Reliance Communications (RCom), is in a tough spot with the merger of RCom with Aircel not happening. With Tata Teleservices being acquired by Bharti Airtel, RCom has emerged as the single weakest player in the Indian telecom space despite having 80 million subscribers.

RCom's revival hopes were predicated on its three-way merger deal with Aircel and MTS. That would have given the entity muscle power in spectrum holding, market share, subscriber base, and network coverage. Most importantly, RCom could have shifted a large part of its debt - Rs20,000 crore (including Rs14,000 crore of bank debt and Rs6,000 crore due to the government) out of its total net debt of Rs44,345 crore as on March 2017 - to the new wireless entity, making it look financially healthier.

Now that's history and RCom is staring at a bleak future. The merger of the wireless business with Sistema Shyam Teleservices (operating under the brand MTS India) is expected to be completed this month after a 24-month delay but is unlikely to change RCom's destiny. RCom's problems are many: falling subscriber numbers, high debt, deteriorating top line and bottom line, and inability to attract investors for its assets.

The fewer subscribers and lower ARPU has led to a fall in its financial performance. RCom posted net losses of Rs1,210 crore in the first quarter of 2017/18, a sharp fall from a net profit of Rs54 crore in the corresponding period last year. Revenues too have fallen 31.6 per cent to Rs3,591 crore during the period. The Future for RCom

Soon after calling off its merger with Aircel, the company announced a plan to reduce its debt by Rs25,000 crore through monetisation of tower, fibre assets, real estate and optimisation of the spectrum portfolio. The telco claims that it continues to be under SDR (strategic debt restructuring) standstill period till December 2018, a major reprieve it received in June this year after lenders raised a red-flag over its debt repayment abilities.

Banks have given a breather to RCom to repay its debt before they start converting debt into equity and, under the SDR terms, take ownership of the company. In the September AGM, RCom shareholders approved issuance of equity shares to lenders in lieu of their loans. It's unlikely that lenders will convert loans to equity in the near future. Taking over RCom would mean that bankers will have to take the pain of finding a right buyer.

Companies providing products and services to RCom have started knocking the doors of the National Company Law Tribunal (NCLT) to recover their dues. Last month, equipment maker Ericsson filed a petition against RCom to recover Rs1,150 crore for services and equipment that it had supplied. IT major Tech Mahindra has also filed a liquidation case for a recovery of Rs8.2 crore.

In a media release, RCom says that its focus in future will be around "higher-growth, higher-margin business to business (B2B) non-mobile businesses". These include India enterprise business, cloud, data centres, and global submarine cable network. Analysts say that these businesses have limited scope of growth, and there are many players competing in these lines of businesses.

RCom says that it's looking at a 4G-focussed mobile strategy going forward. Foreign broking firm CLSA, in an October 3 report to its clients, says RCom is staring at the expiry of nearly 50 per cent of its spectrum in the 800 MHz and 1,800 MHz bands by 2021. "At present, RCom's 2G subscribers are on the 900 and 1,800 MHz bands and its 4G subscribers are on the 800 MHz band. High leverage will limit RCom's ability to buyback spectrums in auctions in 2021," the report says. It has a sell on RCom with 12 month target of Rs17 a piece. Rishi Tejpal, Principal Research Analyst at Gartner says that five players are ideal for this market. "The smaller players must find an exit route. Their survival in this dynamic market is uncertain. I expect further consolidation in the sector," he says.

Neil Shah, Research Director at Counterpoint Technology, says RCom should start scaling down and look for a buyer. "Scaling down would mean selling spectrum in some circles to competition if DoT allows. There are some operators in West Asia and South-east Asia who want to invest in Indian telecom," he says.

There are analysts who still have hope. "The market situation will change from next year. I expect some upward movement in tariffs. The disruption cannot continue endlessly. If RCom is able to restructure debt, it should be able to come out of the mess," says a leader of telecom practice at a global consultancy firm.

RCom is now betting on the sale of its prime real estate in Mumbai and New Delhi, apart from stake sale in towers business, to pay off a part of its debt. However, lapsing of the Aircel deal could impact the towers deal with Canadian private investment firm Brookfield Infrastructure. Under the existing deal, Brookfield will pay Rs11,000 crore for acquiring 51 per cent stake in Reliance Infratel, a subsidiary of RCom, which operates 43,600 towers with a tenancy ratio of 1.87. That was expected to rise to 2.2 post the Aircel deal. But since Aircel deal is off, Brookfield is going to revisit the terms of the deal. Tenancy ratio refers to the average number of operators per cell tower.

A source in RCom says that Brookfield might consider reducing the price it was paying or take full ownership of the company. "It's up to them. At a conservative level, RCom owns assets worth over Rs60,000 crore. Even if the business shuts down completely, RCom is still in a position to pay its creditors fully," says the source.

For the longest time, it was believed that the bonhomie between Jio and RCom will eventually result in Jio bailing out RCom. Since there is no word from Jio, RCom has a long tread ahead.