A curious sight looms up on the arid landscape of Bhachau, 34 km east of Bhuj in Gujarat, at the edge of the Kutch desert. It is the sprawling factory of Asia MotorWorks.

It is an unlikely site for a heavy vehicles plant, far away from the traditional automobile production clusters in the National Capital Region, the Pune-Nashik belt or the outskirts of Chennai. But location has been no barrier to AMW's success. Started in 2002 - though the first truck rolled out only in 2005 - it has grown at startling speed, its revenues rising from Rs 114 crore in 2006/07 to around Rs 1,000 crore in the just-completed financial year.

Click here to Enlarge
The heavy commercial vehicles, or HCVs, market is dominated by two heavyweights, Tata Motors and Ashok Leyland, holding 63 and 22 per cent of market share, respectively. Volvo-Eicher is in third place with 10.3 per cent. But in less than six years of production, AMW has grabbed much of the remaining market and achieved the Number Four position; it sold 9,000 vehicles last year, putting it ahead of high pedigree players like Mahindra-Navistar, Force-MAN and Daimler-Benz. Indeed, in the tipper truck category - the ones where the platform can be raised at one end to discharge the load - AMW is already Number Two, behind Tata Motors. The company also plans to scale up massively in the coming year, raising production more than five times to 48,000 vehicles annually, which it expects will take it ahead of Volvo-Eicher.

Sum of parts business
The man who set up AMW is another surprise. He is no grizzled business veteran, but 36-year-old Anirudh Bhuwalka, an MBA from Babson College, Massachusetts, widely considered Number 1 among B-schools globally for entrepreneurship.

How did he succeed in such a short period? For one, by devising a business plan that relied on massive outsourcing. A noticeable feature of the AMW factory is how much less noisy it is than other similar facilities. That is because it is more of an assembling unit than a manufacturing one - most parts of the vehicles it manufactures are brought here and fitted, they are not produced. In the trucks, the engines are from Cummins, the gearboxes from ZF, the axles from Eaton - and the entire cabin from China, with all systems already installed. Bhulwalka says outsourcing enabled him to start operations early without incurring heavy capital expenditure. "When Tata Motors or Ashok Leyland entered the business, they had no choice but to develop their own technology and manufacture most of the vehicle themselves," says Bhuwalka. "We need not do so. All our suppliers are large companies and leaders in their own fields."

The model, says Bhuwalka, is far from new, being widely used globally. "Paccar has become a $14-billion (Rs 63,000 crore) company and the second-largest truckmaker in North America by following the same model," he says. "Even China does the same. All its trucks are made of parts bought from the same pool of suppliers. They may sport different logos and have some cosmetic differences, but inside they are all the same - engines, gearboxes and often even the frames." 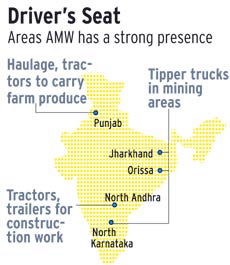 Click here to Enlarge
The plant's unusual location at Bhuj, far from cutting AMW off from the mainstream, is actually an advantage, says Bhuwalka, revealing that the spot was deliberately chosen. "We are right next to the Kandla and Mundra ports," he points out. "I would never have managed the logistics had I been near Nava Sheva (close to Mumbai) because of congestion there." But he concedes that he was also attracted by the incentives - land, water and electricity at concessional rates - the Gujarat government has been providing investors in the state.

Bhuwalka makes it sound too easy. If the heavy vehicles business is such a cakewalk, why are companies like Force-MAN and Mahindra-Navistar, with deeper pockets than AMW, still struggling? Bhuwalka ascribes his success to the attention AMW pays to quality and comfort. "Most trucks in India are sold with very basic amenities, both the body and cabin are unfinished. Buyers have to install many features after the purchase, which is an inconvenience. Our cabins have air-conditioning and a music system installed from the start."

The air-conditioned cabins are so popular with the tipper truck drivers that at some client companies, the drivers jostle to get the right to drive an AMW truck, says R.C. Mangal, Marketing Director, AMW. "Tipper trucks work in dusty environments and the sealed, cool cabin is a great boon," he adds.

Not everyone agrees. R. Seshasayee, Executive Vice Chairman of Ashok Leyland, sees the challenge differently. "Historically, it is the incumbent players who have succeeded," he says. "They have a stronger network, keener understanding of Indian conditions and customer requirements and the capability to carefully configure products."

Uncle Ruia's role
How and why did Bhuwalka decide to make trucks? "I have my uncle to thank," he replies. 'Uncle' is Shashi Ruia, head of the Rs 70,000-crore Essar Group. In 2002, when Bhuwalka was considering business alternatives, Essar won its first major road-building contract. Ruia was finding it difficult to get trucks of the specifications he wanted and suggested Bhuwalka manufacture them for him. Funded by his family and bank loans, Bhulwalka began work. Three years later the first AMW truck rolled out of a shed in Hazira, on Gujarat's southern coast, near Surat, where Bhuwalka's factory was initially located. "The shed is a lounge-cum-service centre for our drivers today," he says. The move to Bhachau took place in 2006 after Bhuwalka acquired 600 acres there. The fledgling company was on a roll, but it had not bargained for the global slowdown that struck in 2008.

Click here to Enlarge
"Up to January 2008, it seemed we could do no wrong," recalls Bhuwalka. "We had planned to massively ramp up production. We wanted to make everything: light commercial vehicles, luxury buses… And then came the crisis." Sales of HCVs dropped by 37 per cent in India, from 235,935 units in 2007/08 to 148,626 units the following year. AMW was badly hit too.

"I learnt a big lesson: do not try to get into too many segments too soon," says Bhuwalka. "If you ask my managers they will all tell you that we have just one aim - to manufacture and sell more HCVs, nothing else." Says Pankaj Bharuka, Deputy General Manager at the plant: "Everything we are doing is to gear up for a massive ramping up of truck production."

Plans afoot
Ground realities have forced Bhuwalka to temper his ambition and idealism in other ways, too. "When I got into this business, I wanted to provide international quality trucks at a price Indians could afford," he says. But without any state incentives to do so, it was not possible and he has abandoned the idea. He prefers to make fully built trucks but higher margins lie in making cowls, or the front of the vehicle without the engine. "Fully built trucks are much safer than assembled cowls, but the government provides no encouragement," he says. He is also planning to make and sell cowls from next year. Even Ashok Leyland's Seshasayee believes that the marketplace for HCVs is changing. "Market dynamics are going to change and with the advent of more players - home-grown or global - competition will get keener. With increased legislation, stricter emission norms, enhanced safety features and evolving customers, demand will reach new heights," he says. A worker at the manufacturing unit of AMW at Bhachau.
Keeping that in mind, AMW intends to manufacture more. Cabins are still imported fully assembled from China, but the company has built its own cabin-assembly line, which will start production soon. One eye fixed firmly on the future, Bhuwalka has set up a 200-member research and development unit in Navi Mumbai to develop new kinds of trucks, such as those used for hauling heavy equipment. "Going forward, we have to look at every possible use of the truck chassis," says AMW president A. Ramasubramanian.

The company's top brass knows there are more challenges ahead. "The competition will not sit back," says Ramasubramanian. "I think they view us as serious rivals now." Another manager jokes that Tata Motors plans to buy a few AMW trucks and take them apart to try and pinpoint where the secret of AMW success lies. In fact, this is a practice AMW itself follows, making no bones about doing so - rival manufacturers' vehicles are parked just outside the administration building at Bhachau.

"The only way forward is to make better trucks and give buyers better value for their money," says Bhuwalka. "We have done so until now, and we will continue to do so."

How to nurture entrepreneurs