Are the dark clouds for the real?

The buzzword at the country’s second-largest bank, which became famous for its scorching growth rates, is ‘measured growth’, a euphemism for losing steam. Here’s what prompted ICICI Bank’s strategic shift. Anand Adhikari reports.

There’s a joke doing the rounds among Mumbai bankers: a committee was formed to create a race horse that would run at 80 kmph. The suggestions came flying in thick and fast—the horse should have long legs, a large neck, trimmed muscles… and so on. Finally, when all the suggestions were implemented, the race horse resembled a camel and struggled to run at 20 kmph.

ICICI Bank: Taking measured steps
The committee realised its mistake and this time set out to make a race horse out of the camel. Some members suggested: “Cut the hump.” Others argued passionately to reduce the length of its legs. Then, someone pointed out: “If we cut the hump and the legs, the camel will surely die.” But that left the committee with an even more intractable question: what was it to do with the camel?

And guess who are laughing at the joke? ICICI Bank’s rivals, of course. Why? The slowdown in the country’s till recently sizzling retail banking segment has brought the high-flying bank back to sea level. Its business grew a paltry 6.9 per cent during the April-June 2008 quarter. By comparison, the public sector State Bank of India grew at 27 per cent and HDFC Bank at an incredible 80 per cent. The reasons aren’t difficult to fathom. The retail segment, which is close to 60 per cent of ICICI Bank’s portfolio, is feeling the pinch of rising inflation and higher interest rates. Result: the retail growth has slowed down to single digit from over 35 per cent in the last 4-5 years.

Chanda Kochhar, Joint Managing Director & Chief Financial Officer, ICICI Bank
The buzzword at ICICI Bank’s headquarters in Mumbai’s Bandra Kurla Complex now is “measured growth” and “growth with profitability”. Says Chanda Kochhar, Joint MD & CEO at the bank: “The growth engine has to adjust itself to the new opportunities and the requirements therein.” Shorn of jargon, it means the effects of the retail-induced steroid have worn off and that the bank must learn to live with less than spectacular rates of growth in future.

That’s a big climbdown for the K.V. Kamath-led bank, which has always believed in aggressively riding growth opportunities, even if it meant compromising somewhat on asset quality, but more on that later.

ICICI Bank’s bread and butter retail credit is now expected to grow at 5-10 per cent or even lower, compared to 35-40 per cent over the last 4-5 years. The bank is also treading cautiously on its foreign sojourn after booking $264 million (Rs 1,135 crore) losses in credit derivatives. Its rural portfolio, another engine it has identified for future growth, is yet to acquire the critical mass required to power growth.

And for the moment, this segment, too, is growing at a snail’s pace. Market experts point out that ICICI Bank’s heavy reliance on retail, which powered it way ahead of its rivals and made it the largest private sector bank in the country, is now coming back to haunt it, though they accept that the strategy was right at a time when interest rates were falling or stable. 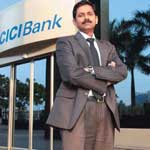 ICICI Bank is readying a new strategy to deal with the challenging times. “The success of an organisation lies in it being able to sense the environment as it comes and in also proactively changing its stance to suit the unfolding landscape,” explains Kochhar.

There’s plenty of the latter happening already. In order to cut costs and rationalise systems, the bank has merged its Used Car and New Car financing divisions and also its Home Loan and Loans Against Property units. The loan origination process is also being tweaked; for two-wheelers, it has been shifted completely from the bank’s dealer network to its own branches. “The reliance on outside marketing channels is gradually coming down because of our growing branch network,” says Kochhar.

The customer-calling division has also been shifted to its branches. The bank now wants to aggressively leverage its branch network to generate retail business in segments like two-wheelers and credit cards. Obviously, given its massive retail portfolio and the possibility of its revival, if the economic outlook turns bullish again, it cannot ignore the sector. But for now, caution will mark its approach to retail lending. 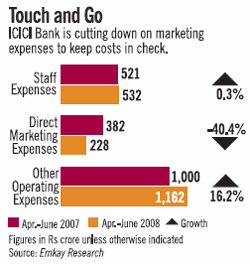 K.V. Kamath, Managing Director & CEO, ICICI Bank
“The current environment has made our business far more resilient. Our capability to change with the times has been tested and we’ve come out stronger,” says Vaidyanathan. “The last three years have given us the experience of 15 years and the next two years will give us the experience of 10 years,” he adds. The management is also focussing on improving operational efficiencies.

It now has guest houses in every major city for travelling employees, thus, cutting down on hotel expenses. Then, it has discontinued the practice of flying in regional managers to its head office for meetings. Instead, it now follows the more cost-effective option of flying out a senior executive to other cities to meet regional managers.

The need of the hour is to find one or more growth engines to replace retail banking. Says Kochhar: “There is another opportunity in the form of corporate business, and it will grow at over 20 per cent.” The bank has been strengthening its loan syndication capabilities to provide funds to the corporate sector.

But here again, rising interest rates can play spoilsport. At a CII function recently, K.V. Kamath, MD & CEO of ICICI Bank, said India Inc. may put some concept stage investments on the backburner because of high interest rates. “The profitability of companies is being impacted by higher lending rates, high commodity prices and costlier inputs,” he said.

The bank has two other focus areas—international business and rural credit—but it has to tread cautiously on both as the former is exposed to geographic risks and places it in direct competition with well-established global banks and the latter has been, historically, a risky business fraught with the possibility of higher NPAs. “We have been growing our international book at over 50 per cent,” says Kochhar. The bank’s global business mostly comprises advising and financing mergers and acquisitions (M&As), loan syndication, etc.

International assets now account for 24 per cent of ICICI Bank’s consolidated banking assets. But, Punit Srivastava, Banking Analyst at Enam Securities, says: “Margins are low in the international business compared to the domestic segment.” Therefore, this segment can’t really replace retail lending as a growth engine, at least not just yet. “We had a non-India-linked credit derivative exposure of around $700 million (Rs 3,010 crore) but we have sold quite a bit of it in the recent past,” says Kochhar. Growth from ICICI Bank’s rural portfolio, at 10 per cent, is also nothing to write home about. “We are investing for the future,” adds Kochhar.

What’s worrying many analysts more than the lack of any significant growth drivers are the rising delinquencies in ICICI Bank’s portfolio. Over the last year, the bank’s nonperforming loans have swelled 50 per cent to Rs 9,280 crore, though net NPAs have grown at a slower pace.

More than 60 per cent of these NPAs come from its retail portfolio, while the balance relates to sectors like iron & steel, power, food & beverages and others.

The sharp increase in interest rates over the past few months—and the possibility of more to come—can result in even more delinquencies, especially in mortgages.

Vaidyanathan, however, says ICICI Bank will leverage its large branch network and state-ofthe-art back-end systems to deal directly with customers for loans. This move will not only help cut costs, but also result in better risk management. But the bank is putting up a brave face. “A large part of the volatility is now behind us, and the environment should improve going forward,” says Kochhar, who is considered the front runner to succeed Kamath—due to retire in March 2009 as MD & CEO.

However, there is a possibility that Kamath may get an extension. Meanwhile, ICICI Bank is also evaluating the option of offloading its 24 per cent stake in a BPO, firstsource, which is valued at over Rs 600 crore. This is expected to make good the losses that the bank is incurring in its treasury portfolio.

The only silver lining for the bank seems to be the rising share of Current and Savings Account (CASA), which can help it replace high-cost deposits with low-cost ones. “The flattening (of the) lending book has its advantages. The high interest rate situation tempered the growth of the lending book. As a result, the ratio of low-cost CASA to total liabilities increased sharply by 400 bps,” says Vaidyanathan. 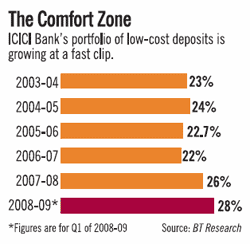 The bank is now targeting a CASA ratio of 28 per cent (by March 2009) compared to 26 per cent now, but even this figure is way short of those of its peers mainly because of the legacy issues of converting from a DFI to a bank. HDFC Bank has the best CASA ratio in the industry of over 45 per cent, and is followed by the State Bank of India (42 per cent) and Axis Bank (40 per cent ).

Jewels in the crown A rough patch: So, can ICICI Bank regain its growth momentum?
The rising valuations of its nonbanking subsidiaries—some of them market leaders in their respective fields—are a big comfort for the bank. ICICI Bank’s share price (Rs 671.50 on August 29, 2008), which is down 56 per cent from its peak of Rs 1,465 per share on January 14, 2008, factors in 35-40 per cent of the valuation of its subsidiaries.

Undoubtedly, it’s a challenging period for the country’s secondlargest bank that left its rivals far behind by both riding and contributing to the retail boom over the last decade. By doing so, it changed the paradigm of banking in India. Now, there is another change—many will call it a course correction—taking place. Says Vaidyanathan: “Of course, we are changing. What’s wrong with that?” Adds Kochhar: “It’s all about adjusting the pace of growth on one side and honing the skills needed to ride the next growth opportunity.”

It has proved in the past that it can do so with elan. Its future now depends on how quickly it can go back to those roots.