Business Today catches up with four pilgrims who made the long trip to Omaha to hear the Oracle speak at Berkshire Hathaway’s annual general meeting.

Warren Buffett is sleeping on a mattress in the Nebraska Furniture Mart, ostensibly checking product quality. He’s rudely awoken by a store manager, who tells him to get on with his job of selling mattresses. Buffett’s new job is thanks to the steep fall in the shares of his flagship Berkshire Hathaway (which also owns Nebraska Furniture); the Board of Directors has apparently suggested that he find something better to do. Buffett succeeds in selling a mattress called the Nervous Nellie to a customer. What makes this mattress special is the pockets it has to store money. 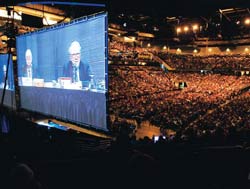 Berkshire Hathaway’s AGM, with Munger and Buffett on a giant screen
The day is May 2, 2009. The venue is the Qwest Centre Omaha, which has some 35,000 investors in and around it. An adjoining hall accommodates those who aren’t lucky enough to get a seat in the main arena. They have to make do with the 79-year-old Buffett and the 85-yearold Charlie Munger—Buffett is the Chairman of Berkshire and Munger, its Vice Chairman—on giant screens. No one's complaining.

It’s the annual general meeting of Berkshire Hathaway; the event that is to capitalists what Woodstock was to the flower children—or what the Kumbh Mela is to pilgrims back home. The skit with Buffett lampooning himself as a furniture salesman is just one of the many segments of an ‘annual movie’ that leads up to a marathon question and answer session. This year, along with questions from the audience, Buffett and Munger take e-mailed questions from shareholders that are read out by journalists. Along with the tens of thousands in the audience, is a sprinkling of investors from India.

For Shiv Puri, Managing Director at the Mumbai-based Voyager Capital Advisors, the long trip is worth every rupee spent. “You have to be there to understand what difference it makes,” says the visibly awestruck Puri. Each shareholder is entitled to four entry passes; Puri got one from a shareholder friend in the US.

Another first-timer from Mumbai, Vivek Shah, a 25-year-old investor, landed in Omaha three days before the AGM. He even persuaded his shareholder relatives settled in the US to attend the meet. For Shah, it’s not just about attending the AGM. A day before the meet, he saw a very approachable Buffett playing bridge with Bill Gates and others at the Borsheims jewellery showroom. Borsheims is a company owned by Buffett and at every shareholder meet, the showroom becomes a carnival place.

Two other first-timers from India are Tarbir Shahpuri, an equity analyst with Edelweiss Capital, and Chetan Shah, a portfolio manager at Religare Securities. Both lined up at the Qwest Centre at 6 in the morning. That’s how they managed to get a seat in the first 10-15 rows from the centre stage. Buffett’s relentless and consistent replies when it came to dealing with queries on stock-picking or whether valuations are attractive— and there were countless such queries—are still etched in Shah’s mind. These include classic gems such as: “We don’t have an opinion about stocks prices. We don’t pick bottoms”; “If it’s a wonderful business you hold it forever” or “We don’t worry if something is up or down, we focus on value”. Munger’s pocker-faced oneliners, too, are something Shah won’t forget in a hurry. 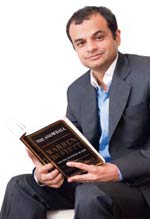 Voyager Capital Advisors’ Shiv Puri: The long trip to attend the AGM was worth it
“He (Buffett) is tactfully suggesting you adopt a different way of thinking,” is just one of the many quips. “When there is so much of an information overload around us, (Buffett’s advice) helps us see things through the clutter and with clarity,” explains Shah.

A senior portfolio manager at an international firm in Mumbai, who attended the meeting for the second time, feels listening to Buffet reaffirms the belief in long-term investing principles. “When there is so much pressure to pick up stocks that are flavour of the season, listening to Buffett at the AGM brings you back to the ground. This is the time to listen to the man,” he adds. In the past, seasoned value investors like Raamdeo Agrawal (Director, Motilal Oswal Securities), Bharat Shah (CEO, Ask Investment Managers) and Chetan Parikh (Director, Jeetay Investments) have been part of the congregation in Omaha.

The Q&A is infotainment at its best. Questions on inflation, investment decisions-gone-wrong, government policies, derivates, the subprime crisis are all tackled in a witty manner. The humour is often of self-deprecating— that’s, perhaps, unavoidable given that Berkshire has had its share of pain in the market meltdown. It plunged into the red with a loss of $1.53 billion (Rs 7,650 crore) in the first quarter of 2009, and shareholders are poorer by 31 per cent over a year. Berkshire lost big money on credit default swaps (CDS), a complex derivative instrument that bets on the credit risk of a company. As companies went bankrupt in the US, Berkshire booked a loss of around $1 billion (Rs 4,800) in CDS in two quarters. Shareholders were curious to get answers from the man, who only a few years ago had derided derivatives as “weapons of mass financial destruction”.

What was the high priest of investing doing playing with fire? Buffett admits he made a wrong call. “Last year, I thought we will make money from CDS, but the reality is we will lose money on it.”

Shareholders—some 300 of them—wanted to know why Berkshire was investing in Moody Investor Services when the credit rating agencies were being blamed for understating the risk that eventually snowballed into the subprime crisis. Buffett’s retort is that he doesn’t tell his companies what to do or what not to do and doesn’t rely on outsourcing his investment decision to the rating agencies.

Munger puts it in his own inimitable way. “They (the credit raters) are good at math… they are too smart for their own good. For a man with a hammer, everything looks like a nail.” 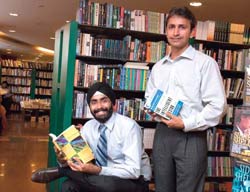 Edelweiss Capital’s Tarbir Shahpuri (L) and Religare Securities’ Chetan Shah: Impressed not just with Buffett, but his books, too
The questions—whether they were from a Chinese investor or from an 11-year -old kid on inflation—were often predictable. But the answers invariably were insightful and in-depth. Shahpuri of Edelweiss was surprised to see how the duo responded to queries on their investment in Chinese company BYD Auto—no mention of price-earnings multiples or earnings growth forecasts or all the other numbers that analysts revel in. Munger prefers hard facts to cold numbers. For instance, he points out that BYD is the main manufacturer of lithium-ion batteries in the world; that the Chinese electric carmaker makes all the parts, but for the glass and rubber; and that it has a remarkable aggregation of human talent (which includes some 70,000 engineers). The audience was convinced.

Investors duly lapped up the stock listed on Hong Kong Stock Exchange, sending it 14 per cent higher in one trading session, a day after the Berkshire AGM. At the end of the meeting, Buffett obliged autograph hunters with his signature on books, diaries and postcards. At earlier AGMs, one could take as many books and other pieces for autographs, but this time around, just one piece of paper or a book was allowed. For attendees, the few seconds spent with the sage of Omaha are the culmination of a fantasy come true. Puri considers himself lucky—he was the last one in the queue and got a chance to steal a few extra moments with Buffett. He used the opportunity to sell India story, and threw in a not-too-subtle hint: “Don’t count us out.” Can India throw up its own BYD Auto in the years ahead?

Call of the small town

Pushing the accelerator instead of brakes