It was the late 1990s and Perschke was in Pune, employed with Mercedes Benz India, a company he now refers to as "the other luxury brand".

Tata would have made the perfect Mercedes buyer. Flush with old money, with the stature to disembark from an S-Class and not be seen as a parvenu, and born a Parsi, a community so much in love with cars that a Parsi-owned one even now fetches a premium in the used-car market. Besides, Mercedes at that time was Tata's partner. And yet... two years! Michael Perschke, Head, Audi India
It was a different era. Indian businessmen were still finding their feet and were less comfortable expressing their success through their wheels. And there were only so many of the successful ones around. Mercedes's three-pointed star was the badge to covet, but those who could pay for it were not many and were of a certain vintage - company owners, chairmen, sirs, dads, uncles. Little surprise, then, that Mercedes, which came to India in 1994, was slow off the blocks. In 2006, after a dozen years of a largely solo run for the company, the Indian luxury car market was all of 3,050 cars.

The world has changed at warp speed since then. "Today, if you don't have a luxury car it is a problem. People say, 'You earn a lot of money, why don't you have a luxury car? Are you stingy?'" says Perschke, who left Mercedes in 2004 to join Volkswagen and has been heading Audi, Volkswagen's luxury car arm, in India since the middle of 2010. Things began to change from 2007, when BMW and Audi - both German, just like Mercedes - came in. Five years later, in 2011, the luxury segment was more than seven times its size in 2006. "Nobody needs to justify it any longer if he drives a luxury car," says Andreas Schaaf, who heads BMW India and on an impulse bought his current car, a beautiful wine-red 5 Series GT, even though it is smaller than the 7 Series he drove earlier.

In the first quarter of this year, BMW, Mercedes and Audi - they comprise almost the entire luxury car market in India - had already sold 6,768 cars, nearly a third of what they sold in the whole of last year. The order of the names, though, needs to be rearranged as BMW, Audi and Mercedes. For Audi overtook Mercedes in sales in January-March this year, putting its nose 139 cars ahead. BMW, which wrested pole position in 2009, was 100 cars ahead of Audi.

Click here to Enlarge
April has seen another strong show by Audi, as it sold 562 cars, an increase of 50 per cent over last year. BMW's and Mercedes's numbers for the month were not ready when this magazine went to print and one does not know if Mercedes will spring a surprise. But Audi is no longer an also-ran in the luxury car race. By 2015, Audi hopes to become the number one luxury car brand in the world as well as in India. In fact, everyone in the company wears a tiny badge on her lapel that says No 1. That may be easier worn than done. For, BMW is not a stationary target. It has moved quickly from 1,387 cars in 2007 - when Audi sold 349 - to 9,371 in 2011 - 5,511 for Audi - and has its own plans for world domination.

In Audi's favour are the economies of scale it gets by being part of VW, the world's second-largest carmaker after General Motors, and one which has rapidly gained volumes in India with all its three brands - Skoda being the third - drawing buyers. VW wants to become the world's largest auto maker by 2018 and Audi's ambition to overtake BMW is a cornerstone of that goal. BMW, for its part, maintains that its autonomy keeps it flexible and focused.

Whichever way the dice roll, it will be fascinating to watch. No less than the way in which BMW and Audi brewed their separate, albeit similar, plans to overtake Mercedes. For Audi, it started with a baby shower. 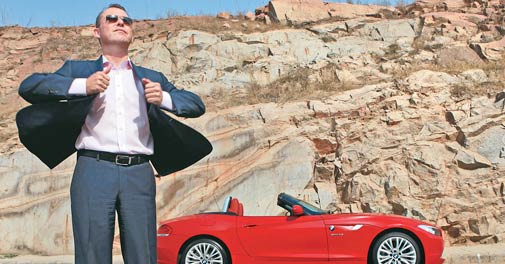 Mercedes is in the old money segment. We are where the future is: Andreas Schaaf Photo: Aditya Kapoor
Living in Pune, Perschke made many friends, whom he visited even after moving to Mercedes's head office in Germany in 2000. He sensed a change when he came to attend the baby shower for the child of Amit Kalyani, son of Bharat Forge Chairman Baba Kalyani. Outside the venue, there was a gaggle of shiny luxury cars. But many of them could not be called cars in the strictest sense; they were sports utility vehicles (SUVs). Interestingly, many of them were driven not by liveried chauffeurs, with grey men in the back seat, but by people who Perschke remembers as "young boys".
"The SUV was booming already when I left Mercedes. If you talked to any Karnataka coffee planters, all of them had a Pajero, and [so did] the film stars. We needed two products in Mercedes, the S-Class [sedan] and the ML [SUV], but somehow they never listened to the research and we spotted an opportunity," says Perschke. That is why, of the first two cars that Audi brought to India, one was the Q7, an SUV. Forty per cent of its sales here are SUVs. 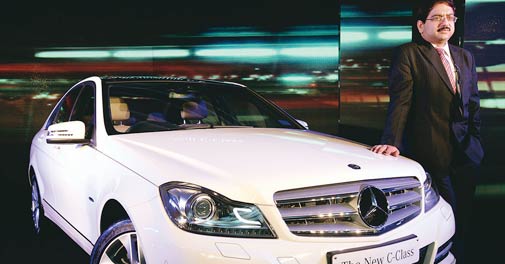 BMW and Audi are ahead of us just because we have a gap in our portfolio: Debashis Mitra Photo: Kaushik Rao
BMW came with two sedans, the 7 Series and 5 Series, but was no less alert to the gaps in the market. "What made us confident was not the number of cars being sold; that was rather frightening. But we had done extensive research. People had a high level of dissatisfaction with the lack of choice, with only one product in the market," says Schaaf. BMW's SUVs, the X series, came in soon after and went a step further than just tapping an emerging segment. The X1, priced at Rs 24.5 lakh in New Delhi's showrooms, put a luxury brand within the budget of the non-Chairman. As did the 'corporate edition' of the 3 Series sedan, priced at Rs 24.4 lakh. "Mercedes was addressing the top end, which was a very limited segment. We wanted to get into the new group of people creating wealth through education, the GMlevel people, the growing segment," says Schaaf.

But neither BMW nor Audi may have won over the core Mercedes clientele. According to a report in Autocar India in April 2010, two of the eight cars in Ratan Tata's basement are Mercedes: an S-Class and a 500 SL. No BMW or Audi there. "That does not worry us," says Schaaf. "Mercedes is positioned in the old money segment. Is it necessary to be positioned there? I don't think so. We are where the future is. All Bollywood stars drive BMWs."

I tried out the Audi in Davos at WEF, I heard good reports about it, so I decided to get an Audi: Adi Godrej
Audi took the slower lane. It became a household name in India in 1985 when Ravi Shastri won an Audi 100 in the Benson and Hedges Championship of Cricket in Australia and the entire cricket team was photographed clinging to the car's body. But Audi was hardly aware of the inroads it had made. It was not even an independent brand then; its sales and distribution was done jointly with Volkswagen. And it was not truly global, confined only to the United States, Europe and a bit of China.

By the time Audi came to India, a good 22 years later, Shastri had been long out of the playground and in the commentary box. Independent and international, Audi decided to build its brand slowly, in keeping with its understated image. Its belief was that building the brand was more important than a quick surge in sales, that once the brand had been established as one to aspire to, sales would follow.

In the process it won over some who could be seen as the Mercedes people. Adi Godrej, Chairman of the 114-year-old Godrej Group, owns an A8, Audi's biggest sedan. He is as much a part of the old business elite as Ratan Tata, but may be perceived by some as the more likely to accept an invitation to a party. "I tried out the Audi in Davos at the World Economic Forum, and then I heard very good reports about it, so I decided to get an Audi," Godrej told Perschke in a conversation published in the Audi magazine. Perschke counts Sunil Munjal of the Hero Group and Baba Kalyani among other famous Audi owners.

"They are the people who own businesses. They are not accountable to anybody if they buy an A8; they do so because they want it," says Perschke, who believes that a typical Audi buyer is a few years younger than the BMW or Mercedes buyer. To him, that is a big business advantage. "The older generation worked hard to earn the money, so it is a bit stingy. But the new generation grew up with the wealth, or made wealth pretty quickly, like the property developers or the IT guys.

Besides, the older generation holds on to its luxury cars for eight, nine, or 10 years. The young guys change their cars every two or three years," Perschke says.

Schaaf is not too taken in by the age talk. "Age is not a factor for us. We are not a youngsters' brand, we have never wanted to be. Our average buyer is 40-plus. We are for successful businessmen and company owners. Over 60 per cent of our customers like to drive their car every once in a while. This is the difference; we make cars that give driving pleasure."

Amid this sparring between BMW and Audi, it is easy to forget the one that has been around the longest. But Mercedes will not be forgotten so easily. "On comparable models, we are far ahead of BMW, Audi. BMW is ahead only because of one brand in its portfolio, the X1. For Audi, it is the Q7 and Q5. They are ahead of us [in January-March] just because we have a gap in our portfolio," says Debashis Mitra, who heads sales and marketing for Mercedes Benz India, and spoke to BT as the head of the India unit, Peter T Honegg, was busy at the headquarters in Stuttgart.

He is sanguine in the face of the change in the rankings. "Is it important [to be No 1]? Yes, of course!" However, according to him, the real countdown has just started. "When all three companies have all their weapons out, the game of numbers begins. Otherwise it is child's play."

This view finds support from Vikas Sehgal, the London-based global head of automotive practice for investment bank Rothschild. The volumes in India are still too small, says Sehgal, to take the ranking changes seriously.

But the volumes will not remain small forever. Ten years ago, the luxury market in China was where India's is today, but has since grown to about a million units. Though India will take its time to get there, everyone expects Indians to buy about 150,000 luxury cars in 2020. By then the buyers will mature.

"People are buying luxury cars today to flaunt them. They are buying for gimmicks like a remote control or an audio system. But the real luxury is the drive quality. And we are the actual luxury cars," says Mitra.
Tags: Audi | Mercedes | Ratan Tata | BMW | Adi Godrej

A $50 bn opportunity up for grabs