Aurobindo Pharma shifted its focus from basic ingredients to finished drugs over the past few years. It is now moving further up the value chain to boost profitability. 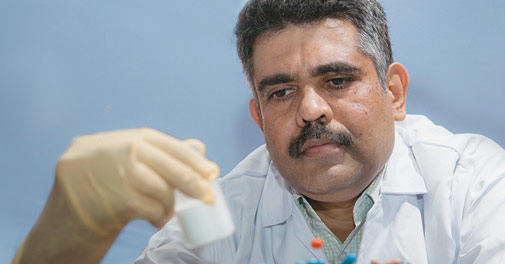 Aurobindo Pharma MD and CEO N. Govindarajan at a company research centre. "It [the transition] is purely driven by the need to get more into areas where there is scope for better profit margins," he says. (Photo: A. Prabhakar Rao)

On February 23, 2011, the US Food and Drug Administration (FDA) banned imports of products made at a factory of Aurobindo Pharma citing violations of manufacturing standards. Shares of the Indian drug maker plunged that day as well as the next two days, losing a quarter of their value. Exactly three months later, the company again came under regulatory scrutiny with the FDA asking it to comply with packaging and labeling standards at a second factory. Investors dumped Aurobindo again, with the shares sliding 16 per cent over three days.

The tables have turned since then, and Aurobindo is now the darling of investors. On May 28, its shares touched a one-year high of Rs 655.60 after surging more than four-fold since March 2013 when the FDA lifted the import ban after having satisfied itself of the improvements Aurobindo made. The company's spectacular performance is not limited to stock markets alone; its revenue and profitability have also jumped. Net sales for the nine-month period through December 2013 touched the level attained in the entire preceding fiscal year while profit before tax more than doubled. A detailed look at the financials shows sales have doubled since 2008/09 while pre-tax profit has jumped more than 10 times.

So, what has been driving growth at Aurobindo?

Aurobindo was founded in 1986 by P.V. Ramaprasad Reddy and K. Nityananda Reddy (the two are related - Nityananda is married to Ramaprasad's cousin and Ramaprasad's son is married to Nityananda's daughter). The company is named so because its first factory was set up in Pondicherry, the adopted home of spiritual guru Sri Aurobindo. The company, which sold the Pondicherry unit in 2002 and shifted focus to Hyderabad, mainly made bulk drugs for more than two decades. But it has transformed its business model over the past few years and moved up the value chain. Five years ago, bulk drugs - also called active pharmaceutical ingredients (APIs) - accounted for nearly 60 per cent of total revenue while finished drugs, or formulations, contributed the remaining. That has changed now. For the first nine months of 2013/14, almost two-thirds of revenue came from finished drugs and APIs made up the rest.

The reason for the shift away from bulk drugs such as the widely used antibiotics semi-synthetic penicillin and cephalosporin and the new focus on finished drugs is simple - finished drugs offer higher profit margin. According to industry estimates, bulk drugs typically offer margins in a range of 10 to 20 per cent. Margins can go up to 50 per cent in the case of finished drugs taken orally, such as tablets and capsules, and even higher for injectable products.

What boosts Aurobindo's margins further is the fact that it sources more than 90 per cent of basic and intermediate ingredients used in the making of finished drugs internally. "There was a phase when Aurobindo was seen as a company with more of 'me-too' products. It now wants to transition to one that has a differentiated product portfolio," says N. Govindarajan, CEO and Managing Director, Aurobindo Pharma. "It is purely driven by the need to get more into areas where there is scope for better profit margins."

The six-feet-six-inches tall Govindarajan joined Aurobindo in October 2010 from Shasun Pharmaceuticals as CEO of the bulk drugs business. He has been leading the transformation at Aurobindo for the past couple of years after being promoted to managing director of the company in June 2012. Over the past couple of years, the company has diversified into new segments for its finished drugs, such as cardiovascular, neurology and gastrointestinal. The focus has also been on expanding business in key markets such as the US and Europe. 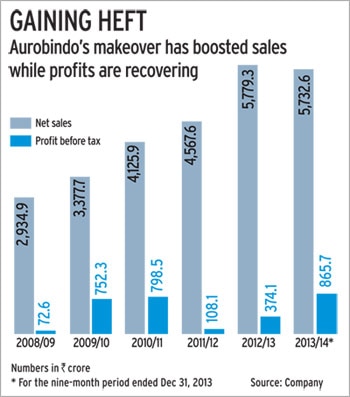 Aurobindo started its US business just 10 years ago, becoming one of the last leading Indian companies to enter the world's largest drug market. Overall, Aurobindo has filed 336 new drug applications with the FDA, second only to Sun Pharmaceutical Industries among Indian drug makers. Of these, 166 have been approved. The US now contributes a third to total sales. Revenue from the US rose to Rs 931.2 crore in October-December 2013/14 from Rs 513.4 core in the same period a year earlier.

Aurobindo's US business expanded rapidly after it started selling its injectable penicillin products in April 2012 through its wholly owned subsidiary AuroMedics Pharma. Playing an important role in this expansion is a new factory in Hyderabad that makes sterile liquids. Aurobindo launched six products made at the factory, which received FDA clearance in 2012, in the US last year, says Ronald F. Quadrel, President, AuroMedics, in an email to Business Today. He says the factory will make "a high percentage" of the injectable products the company will launch in the US.

Aurobindo has an aggressive timeline to launch generic injectable products, says Quadrel. It has filed 47 applications for generic injectable products with the FDA since 2011, of which 38 are under review. The company is developing 60 more products, the majority of which should be filed with the FDA within two years. He expects "a modest number" of these products to receive the FDA's clearance in 2014 and a significant upsurge in approvals in next two years. "The development pipeline? has a significant number of products that are, or have been, on the FDA's shortage list? (and) products already off-patent that have limited competitors," says Quadrel.

The development pipeline... has a signifi cant number of products that are, or have been, on the FDA's shortage list... (and) products already off-patent that have limited competitors

The reason Aurobindo is turning its attention towards injectables and limited-competition products, particularly those that cater to niche segments such as cancer, is because these offer higher profit margins. That is also the reason why the company plans to launch penems and controlled substances. Penems is a new class of antibiotics while controlled substances are medicines that have some narcotic products as ingredients and find applications in areas like pain management.

Another area on which Aurobindo is concentrating is injectable peptides. Peptides are basically a type of proteins that are used in a wide range of areas both in medicine and biotechnology and are also used in health supplements and skin care products. The company set up a new unit, AuroPeptides, about a year-and-a-half ago to develop and commercially manufacture polypeptide bulk drugs. Aurobindo is now one of the few vertically integrated companies in India that can make both peptide ingredients as well as finished injectable products.

New product launches in these new high-margin segments will help Aurobindo sustain its growth momentum over the next two to three years, Manoj Garg, research analyst at broking firm DSP Merrill Lynch, said in a January report. Garg expects the company to grow strongly considering its solid pending pipeline in the US and increased focus on differentiated and complex generics. Perin Ali, analyst at Edelweiss Securities, concurs. "With a product portfolio of more than 300 products, it [Aurobindo] has one of the deepest portfolios for regulated markets," Ali said in a November 2013 report. To add more arrows to its quiver, Aurobindo hit headlines in January this year when it decided to acquire the loss-making operations of the Dublin, Ireland-based Actavis Plc in seven western European countries - Italy, Spain, France, Portugal, Germany, Belgium and the Netherlands - for e30 million (about Rs 240 crore) in cash. The deal was completed in April.

The acquisition adds about 1,200 products and a pipeline of more than 200 products to Aurobindo's portfolio, the company said in a statement at the time. It added that the acquired business likely had net sales of e320 million (Rs 2,560 crore) in 2013. Just after the deal was announced, co-founder Ramaprasad Reddy told BT over the phone the deal will start adding to the bottom line in a year's time. It will also help the company grow its revenue to about $1.7 billion (about Rs 10,000 crore) in 2014/15, he said.

Aurobindo seems to be in a sweet spot at the moment with a strong pipeline of new drugs it plans to launch in the US. However, we need to see if there are any regulatory surprises or if any new FDA issues crop up

Will Aurobindo meet its targets? And will investors remain bullish?

An analyst at a Mumbai-based brokerage, who does not want to be named, says the company has, historically, promised more and delivered less. He also felt that, although the company has hired professionals for key management roles, it should improve its corporate governance practices.

Hemant Bakhru, analyst at CLSA, says Aurobindo has started getting revenue from limited-competition products like the anti-depressant drug Cymbalta and seems to be in a "sweet spot" at the moment with a strong pipeline of new drugs it plans to launch in the US. "However, we need to see if there are any regulatory surprises or if any new FDA issues crop up," he says. That's what the company must watch out for to remain the darling of investors.

Textile exports buck the trend, grow more than 15% in FY14