T he festive season is here, and for the first time since 2012, auto manufacturers of all hues - especially passenger vehicle and two-wheeler makers - are celebrating. Already, September has yielded bumper sales and with the entire Navaratri period culminating in Dussehra, as well as Diwali, falling in October, this month and succeeding ones can only be better still.

Manufacturers are gasping to fulfil demand. All five of passenger car market leader Maruti Suzuki's plants in the Gurgaon-Manesar manufacturing hub are working to full capacity. The company has delayed the launch of its new compact SUV Ignis to make more Balenos and Brezzas and thereby reduce the long waiting periods for these models. Hyundai's Elantra sedan has booked 1,100 orders within a month of its debut in August, while its all new SUV Tuscan will hit the market in late October.

In two-wheelers, the industry achieved an all-time high production of 10 million units in the first six months of 2016/17, and expects the second half of the year to be still more buoyant. Overall sales rose 17 per cent in the first half of 2016/17. Sales were actually negative (-0.36 per cent)in the same period last fiscal. "Market sentiment has improved throughout the country," says Pawan Munjal, Chairman and CEO of market leader HeroMoto Corp. "We will have 15 launches this year, three of them in the festive season."

The festive season starts with Ganesh Chaturthi boosting the Western market in late-August and September, moves to the South with Onam and to the East with Durga Puja. Diwali, along with Dhanteras and Bhai Dooj come next, lighting up all of India's markets but particularly the North, followed by Christmas and New Year, till it terminates with the harvest festivals of mid-January, especially Magh Bihu in Assam. This year, even before the season began in full earnest, in the first six months up to September, demand for passenger vehicles grew at 12.34 per cent (up from 6.22 per cent last fiscal) and two-wheelers at 12.65 per cent (-0.36 per cent last fiscal). In global comparison, passenger car sales growth in India has been close to China's 12.8 per cent, and much higher than in other major markets such as the US, Japan, Russia or Brazil, which have witnessed a decline.

"There has been a perceptible change in consumer behaviour with several positives such as favourable macroeconomic factors, eased inflation, general positivity around the passing of the Goods and Services Tax (GST) Act, and a good monsoon," says R.S. Kalsi, Executive Director, Marketing and Sales, Maruti Suzuki. Lowered interest rates and implementation of the Seventh Pay Commission's payout to government servants have also helped. "Festivals are the biggest trigger for market growth," adds Rakesh Srivastava, Marketing and Sales Head, Hyundai. "People make rational purchase decisions but emotions also play a role during this period. In March 2011, the market grew an astonishing 29 per cent. With a dozen new cars likely to be launched soon, the indications are that there may be a similar surge now."

The current favourites are offerings of the past few months - Maruti Suzuki's Brezza, Ciaz and Ertiga, Renault-Nissan's Kwid and Hyundai's Creta. But older models are by no means neglected. Even old warhorses like Maruti Suzuki's Alto and Mahindra & Mahindra's (M&M) Bolero are selling well. Not surprisingly, manufacturers, dealers and financiers are stoking the fire with all kinds of attractive discounts and repayment deals. Discounts of over Rs 1 lakh are being offered for some of the more expensive models, such as Honda's Mobilio, Skoda's Rapid, Chevrolet's Cruze and Nissan's Terrano. "The Navaratri rush has pushed finance deals to record levels," says Rajan Pental, Group President, Retail Assets, YES Bank. "There is a distinct change visible this year due to higher confidence in the economy." 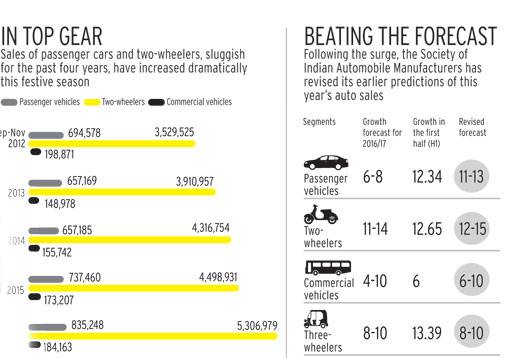 No doubt the benefits of the spike are unlikely to be distributed evenly - they will go mostly to the leading players. "It's illogical to think that all will do well," says Wilfried G. Aulbur, Head, Automotive Asia, Roland Berger, a global consultancy firm. "Only those which offer models with something new, either in technology or design, and possessing an extensive support sales and service network, are likely to gain." Even so, the change is striking, and has led the Society of Indian Automobile Manufacturers (SIAM) to revise its earlier growth projections. "The financial year saw a slow start following which we lowered our forecast to 6-8 per cent growth for passenger vehicles," says Sugato Sen, SIAM's Deputy Director General. "But looking at what is happening now and after speaking to our members, we have revised this to 11-13 per cent." (See Beating the Forecast.)

The boom includes the rural market, where, for instance, 30-32 per cent of Maruti's vehicles now sell, up from 2 per cent in 2010. More dependent on this market than cars, two-wheeler makers have also been devising innovative financing schemes for rural areas. Chennai-based TVS Motor Co, which has also seen double-digit growth, has launched a special 3.99-per cent interest scheme and also allows rural buyers to pay entirely in cash. "We launched some special products in the festive season and they have been very well received," says K.N. Radhakrishnan, President and CEO, TVS Motor. Hero MotoCorp is holding 'exchange carnivals' in Tier-II towns and has employed nearly 1,000 rural support executives to reach out to untapped areas.

The rural surge can be seen from the sale of not only cars and two-wheelers there, but also tractors. The largest tractor maker M&M posted an astounding 70 per cent growth in September. "The good monsoon has led to a spurt in kharif sowing this year," says Rajesh Jejurikar, President and CEO, Farm Equipment and Two-wheelers, M&M. "We anticipate increased consumption across markets in coming months." Tractor sales, too, had been sluggish for the past four years, but this year consultancy firm InfraInsights forecasts 20 per cent growth, followed by 15-18 per cent production increase in the next two years. Even construction and earthmoving-related vehicles are selling well, thanks to government policies seeking to revive infrastructure. "Construction and earthmoving-equipment sales grew 45 per cent in the first half of 2016/17," says Vipin Sondhi, CEO and Managing Director, JCB India.

But there are always thorns among the roses. Commercial vehicles have yet to see much traction and, indeed, continue selling at levels below 2012 (see In Top Gear). While light commercial vehicles are doing well, with 11.69 per cent growth in the first half of 2016/17 over the same period the previous year, medium and heavy vehicles have seen sales drop by 2.27 per cent in the same period. In September this year, they sold 14 per cent less than in the same month a year ago. Overall, in the first six months, sales rose 6 per cent, which includes a 4 per cent rise in bus sales. "Pent-up demand and replacement demand have tapered off," says Abdul Majeed, Partner at global consultancy Price Waterhouse. "Freight demand is not increasing to support new purchases. There is also some uncertainty amongst fleet owners about GST's overall impact on freight movement. This segment will remain under pressure till we see overall sustainable development across sectors and clarity is available on GST." 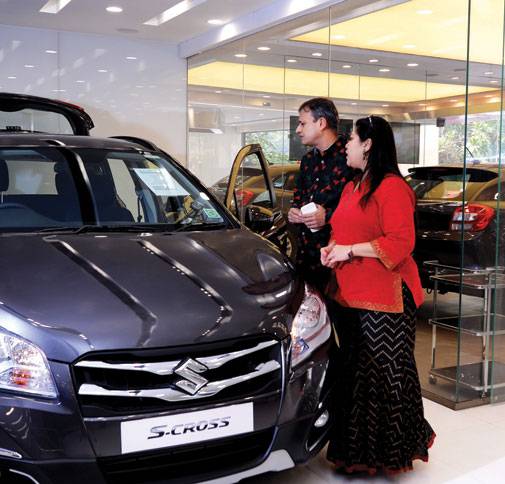 Still, not all industry watchers are worried. Many expect the second half of 2016/17 to be better for commercial vehicles than the first, following increases in industrial and agricultural output, which will all require transportation. The effects of the good monsoon, which will drive rural consumption even higher, leading to greater use of commercial vehicles, are yet to fully manifest themselves. "We expect the overall truck and bus market to remain robust across markets," says Vinod Aggarwal, CEO, Eicher Motors, India's third-largest commercial vehicle maker. "The sale of heavy trucks exceeding 49 tonne capacity has been increasing. Even if there are months with minor blips, it may not affect industry performance in the long term."