As demand slows down and profitability takes a hit, India’s automobile companies are pulling out every trick from the cost-cutting book— and a few from outside—to stay on the road. 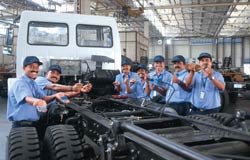 Ashok Leyland employees in happier times: Cost savings have always been a mantra
Any customer can have a car painted in any colour that he wants so long as it is black,” thundered Henry Ford, the father of the assembly line in the early 1900s. The car he was referring to was, of course, the best-selling Model T, the world’s first affordable car. He did make Model Ts in different colours, but back home, most Indian auto manufacturers must be wishing that they could take a leaf out of Ford’s book. After all, sticking to black would ensure that they save costs on paints of other hues; and another view is that black paint dries faster, so you can roll out more vehicles.

At a time when demand has shrunk, however, increasing production is hardly a priority for the Indian auto sector. But getting more productive certainly is. Data from industry body, Society of Indian Automobile Manufacturers (SIAM), shows that since 2002-03, the sales of all automobiles has risen 13-16 per cent every year, except in 2007-08, when sales fell 4 per cent in volume terms, primarily because two-wheeler sales crashed, even as cars and trucks did show growth. In the current year, however, the plunge has been across the board, with sales volumes (till January) down an overall 4.3 per cent.

Automobiles is a cyclical industry; the last downturn came in 2000-01, although a silver lining at the time was exports. Today, it’s a double whammy: Global demand has slumped thanks to a global liquidity crunch and an increase in financing costs. For auto makers, there’s little option but to embark on a ruthless cost-cutting drive and squeeze out efficiencies from every rupee spent to stay competitive. No stone—not even small ones— are being left unturned: Car-pooling is being encouraged, train travel made compulsory, air travel restricted, hiring of high-end taxis stopped; and a few have also stopped handing out snack packets on the shop floor.

It’s a grim situation out there, with Tata Motors’ highest ever quarterly loss of Rs 263 crore for the quarter ended December 2008 being the biggest manifestation of the rough road. The Rs 6,300-crore commercial vehicle giant has recognised the gravity of the downturn and aims to shave Rs 1,000 crore off its production costs over three years. It is also seeking to reduce the total time of manufacturing by changing some processes and involving vendors at the design and development stage in a bid to cut time and costs. 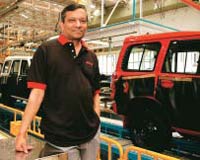 Pawan Goenka
Pawan Goenka, President (Automotives) at Mahindra & Mahindra (M&M), shrugs that the industry needs such a rude reminder every 7-8 years to help bring cost-consciousness back into focus. “Efforts taken now will remain with us for the next few years even when the industry gets into a high-growth phase again,” he explains. According to IDFC SSKI’s monthly auto update, M&M has sold 84,000 utility vehicles in 2008-09 (till January)—3 per cent lower than a year ago. Whilst the company has a capital expenditure programme of Rs 5,000 crore over three years, it could look to bring this down by 10 per cent, mainly by economising on future production processes and post-poning some of the CAPEX plans. It has also been able to snip fixed costs by 10 per cent with measures such as curtailing air travel, shifting excess officers from one plant to another and lowering inventory levels to five-year lows. Opportunities for outsourcing are also being explored. For instance, for future investments, M&M may outsource the process of stamping of steel sheets into the mould of a car to third party vendors.