Interest rates are up, but passenger vehicle sales show no sign of slowing down.

It’s strange, but true. The last few months have seen interest rates gradually creep up, but unlike the real estate sector where there has been a direct impact on sales, the passenger vehicle market has seen domestic sales climb 13.6 per cent over the first five months of the current fiscal. This pales in comparison to the 20.7 per cent growth the market witnessed in the previous fiscal but is way above the 7.67 per cent growth the market saw in 2005-06.

Even the industry complained that high interest rates and a high rate of excise were hurting sales at the recent Society of Indian Automobile Manufacturers (SIAM) convention in New Delhi, prompting the Union Minister for Heavy Industries Santosh Mohan Deb to say that he would ‘help’ address the industry’s concerns.

However, the industry seems to have a point—of the 5,90,653 units sold domestically in the first five months of the fiscal (as compared to 5,19,930 units for the same period last year), a large chunk of the new sales, if not all, came from newer model launches such as the Mahindra-Renault, Logan, Suzuki SX4 and Swift Diesel and the Chevrolet Spark. Sales of older models such as Hyundai Santro and Tata Indica have actually declined.

Says Rajeev Chaba, Managing Director, General Motors India: “Launches happen at a global level nowadays and new launches always seem to enthuse buyers.” But he adds: “It is incorrect to assume that rising interest rates have not had an impact on sales, because if interest rates were at the levels they were 12 months ago, I would have sold a lot more cars than I have.”

Rajesh Jejurikar, Managing Director, Mahindra-Renault, agrees with that sentiment. “People tend to get more cautious in the current scenario (of rising interest rates), and newer models tend to benefit because of this, since things like resale value start playing a greater role.” The Logan has done particularly well over the first few months. But bankers have a slightly different take on the matter. Says N. Ravi Narayanan, Group Resource Head, Auto Sector Loans, ICICI Bank: “At a level it is sentiment that is impacting the market rather than actual increases in interest rates.” His point is: “If you assume that loan rates have climbed 300 basis points from last year, on the average loan amount of Rs 4 lakh, the impact is only Rs 600 per month.”

However, Narayanan does point out that the percentage of vehicles financed has come down from around 85 per cent 18 months ago to around 70-72 per cent today. “This is because earlier people knew they would get a higher return than the rate of the loan, but at today’s 14-14.5 per cent rates, they would rather put their (own) money into the purchase.” Also, interestingly, contrary to popular belief, ICICI Bank, the largest auto loan company in the country, has not seen a dramatic rise in tenure periods. “The average tenure has gone from 38-40 months to around 42 months.” According to Jagdish Khattar, Managing Director, Maruti Suzuki India, what’s hurting more is the fact that a large number of consumers are steering clear of buying a car because they expect interest rates to fall. “More than the high interest rates, the hope of lower interest rates actually impacts sales harder. We have customers who walk into dealerships, choose a car and then tell the salesman that they will return when the rates come down.”

Khattar also believes that old models need not see sales decline. “Look at Swift, for example, a few months ago we were running a promotion of Rs 20,000 (discount) on the car. Today, after the launch of the diesel variant, we have seen an uptake in the sales of the petrol variant also.” 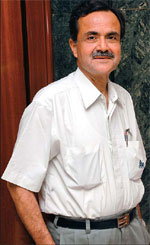 Car companies are resorting to promotions in many cases to keep the production lines running, according to Khattar. “We have a promotion on the Zen Estilo right now, but that is part and parcel of the game,” he says matter-of-factly. Maruti has also been running innovative new schemes to sell cars, including extending the reach of their dealers to smaller towns, which has paid off in a big way. “If it were not for such schemes, would we be seeing the growth numbers that we have posted? I do not think so.”

Even Honda has started offering incentives on their best-selling City, though Masahiro Takedegawa, Managing Director, Honda-Siel Cars India, points out that promotions were being “offered by dealers” because the company was launching an updated model. “The customer wants a good deal, so even if we do not offer discounts, we have to offer them value for money by giving more features,” he said recently at the launch of the new variants of the City.

Another reason growth has been impressive over the initial months is the resurgence in sales in traditionally slow southern markets. “All four states have seen tremendous growth, but Tamil Nadu in particular has been very good for us,” says Khattar.

“Over the last two years Andhra Pradesh and Tamil Nadu have seen a massive surge and this is across sectors,” admits Narayanan. (See Southward Ho!, Business Today, August 12, 2007). “I believe the southern buyers were a bit more conservative in their purchase decisions earlier, and now they are more financially liberated,” Jejurikar points out.

Even though numbers have been climbing impressively, auto-maker are cautioning against exuberance. “Last year, the months of August through November were particularly good. The early indications from this September are not that encouraging; sales are up, but not as much as we had hoped,” says Chaba.

Not one to trust raw numbers, Khattar points out that car buyers in India are quite religious when it comes to purchases. “This month is going to be bad. Last year, the inauspicious shradh period in north and west India finished by September 23, and the last seven days of the month were spectacular. This year, the shradh starts on the 24th of the month. I do not have to gaze into a crystal ball to tell you that sales will decline this September.” The rest of the industry, too, does not expect sales to climb up dramatically over the festive season.

Explains Khattar: “You have to keep in mind that the main reason why sales are up so impressively over the first few months this year are because last year the first few months were particularly slow.” He almost expects sales to be sluggish going forward when he says: “It will be interesting to see if the rate of growth will continue over the next few months.” On a lighter note, he says in case the market slows down, he expects the media to rain downbeat stories. Little wonder then that despite the impressive numbers posted by the industry so far this year, there is a feeling of pessimism in the industry. As Khattar jokingly points out, “Being excited raises expectations. Doing well is to exceed expectations.”