Whirlpool, written off as a has-been till as recently as five years ago, has scripted a remarkable comeback. 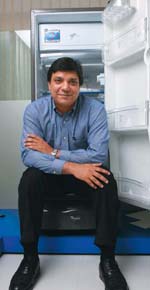 Arvind Uppal
Down the buzzing corridors of Whirlpool’s office in Gurgaon, everyone is consumed by a four-letter vision: “2x4x.” This nifty term was coined after a relentlesslyfought battle for market share earlier with the mantra of “sustainable growth”. It’s a term that Arvind Uppal—who took over as Managing Director in February 2005 and was recently promoted as Whirlpool’s Asia-Pacific Head (excluding Greater China)—and his colleagues are trying to turn into reality. “We have a target in place for 2010 and 2x4x means we have to achieve twice the turnover and four times the profit (from its current level) in the next three years. Our first quarter results are already proof that things are working to plan,” he says.

Whirlpool posted its first fullyear profit after tax of Rs 32.32 crore in 2007-08. It went into the red with a loss of Rs 33.65 crore for the 15-month period ended March, 2004. Uppal, seen as the main architect of this turnaround, is quietly confident. “When things are done right, it’s business-as-usual; we posted a profit of Rs 45 crore in the first quarter ended June ’08, which represents an increase of almost 38 per cent over our full year profits for 2007-08. But we did not make a big deal about it.

That’s not our style,” he says.No big deal—that’s the interesting story of the ‘Genius’, the clever warrior that has helped Whirlpool claw back some market share. The company, which had virtually been written off by many as an also-ran three years ago, actually had an early start when it entered India in 1987 through a tie-up with Sundaram Clayton to form TVS Whirlpool. In 1995, it acquired a majority stake from its partner and also bought Kelvinator India’s direct-cool refrigerator facility. The following year, it merged with Kelvinator India (a listed company) to form Whirlpool of India and, therefore, is also a listed entity today.

Actually, it did not have a bad playing field and in 2001 sold over one million appliances to Indian homes, but was caught unawares, like most others, by the changes that were brewing in the consumer durables market. By 2004, when it reported its first loss, the Korean chaebols held complete sway. Hard knocks are known to teach many to fight better. “We are determined not to allow a repeat of 2004. We launched ‘Genius’ in 2005, which eventually helped us tide over the crisis,” says Shantanu Das Gupta, Vice President (marketing) at Whirlpool. What Das Gupta is referring to is the company’s decision to focus on its core strength: entrylevel, “direct-cool” refrigerators that account for 70 per cent of the Indian market. It launched ‘Genius’ with many changes and product innovations that hold the key to its turnaround. 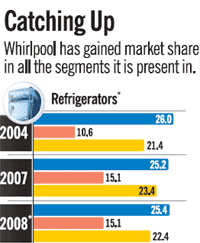 Click here to Enlarge
A Genius for Design At the heart of this seemingly simple, entry-level direct-cool refrigeration lies Whirlpool’s daring decision to focus on product design and not cut prices (matching rivals’ price cuts had pushed it into the red in 2004). Rather, it offered its products at a slight premium to those of its rivals. “It may appear commonplace now, but back then it was a brave decision. We had our people and distributors questioning our logic, but it has paid off,” says Das Gupta.

The company also cut down on unusually long credit periods of 50 days to its distributors against the industry norm of 30 days and began asking for cash on the table. “We focussed on innovation, but not big-ticket, technologychanging ones. It’s more to do with evolution—something that women, our target consumers, vibe well with, unlike men, who tend to go in for revolutions, gigabyte-kind of changes that so mark the electronic and software space,” says Uppal, who was head-hunted from foods major Nestle India to give shape to a winning strategy.

The company has gone into the kitchens of middle-class homes to chat up home-makers. It roped in award-winning designer Hari Nair as Director of Whirlpool Asia’s Global Consumer Design studio. Nair, who has in the past influenced the transformation processes at corporations such as Hasbro, Polaroid and Swarovski, is now busy recruiting young talent from the National Institute of Design, the Industrial Design Centre of IIT-B and other top institutions.

Result: a new category of the 180-litre refrigerator (against the usual 175 lt.), wider range of colours and versions that offered a non-refrigerated onion-and-potato rack under the fridge, a lipstick holder and an onion/lemon holder. “We found women storing lipstick in their refrigerators as they tend to melt in the heat; we found kitchen space cramped in most homes and a separate space for onions and women wanting to store left over lemons,” says Nair. Nair has to be prodded to speak of the little-but-fortune-transforming changes in design. “We find that most Indian homes hardly use their freezer space, unlike the West.

So, we worked to bring out the single-door ‘Fusion’ series that has a smaller freezer space, and offers the dual function of a direct cool and a frost-free refrigerator as it has a button that takes care of defrosting,” he says. There are many things working for it now—like its best selling pink polka-dotted refrigerator and the one with LED lighting on the door-mounted temperature-control panel, which lights up kitchens for some time when the electricity supply packs up, or the Swarovski crystals in its fullyautomatic Mastermind series. 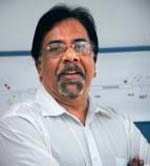 Hari Nair Director/ Global Consumer Design Studio â€śMost Indian homes hardly use their freezer space well. We introduced the single-door Fusion series of smaller freezer space with direct cool and frost-free featuresâ€?
New mastermind
Following its success in refrigerators, the company expanded its washing machine range to include fully-automatic dryers and frontloading washing models and, two years ago, launched air conditioners and microwave ovens that are slowly picking up in the market (see Catching Up). Now, it is foraying into new areas such as premium built-in appliances— hobs, hoods and dishwashers— imported from Europe for modular kitchens. A year ago, it also got into the water purifying business with its Purafresh range based on reverse osmosis.

Those who have been tracking Whirlpool can’t hide their admiration for it. “It has a very thorough approach to design. It thinks through its product designs after spending a lot of time with homemakers,” says Ravi Poovaiah, Head Professor at the IIT-Bombay’s IDC. Its former employees also remain its admirers. “I spent four years with Whirlpool from 2004 until June this year as Director (Sales Strategy) and think it has great consistency in its thought and strategy. It is focussed on design and its margins, and has shown great foresight in getting into growing new categories like water purifiers.

Its other great strength is the way in which it nurtures talent,” says Hiren Merchant, who now heads sales at Onida. Its people focus is also apparent to top talent firms, which have either poached from or recruited for it. “I can say that it lays a huge stress on integrity. Its operation style is one of taking people along and getting them to participate in its value, vision and eco-system. The focus is on joint goals,” says Gauri Padmanabhan, partner at Heidrick & Struggles, a seniorlevel executive search firm. 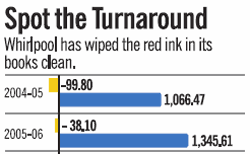 Click here to Enlarge
Watershed resolve
Down the line, the company’s future will be decided by the success of its forays into new areas such as water, among other things. “We want to be in categories with products that can survive at least a 100 years and will be relevant with all necessary modifications that will be required,” says Uppal. But it also faces challenges. For starters, it needs to establish its turf beyond refrigerators and washing machines for better leverages and also increase its presence in the market.

While it has done that by getting into new areas such as water treatment, built-ins, ACs and microwave ovens, the company faces huge competition from existing players in the last two categories. Then, it also has to deal with rising input cost pressures. “We are aware of the challenges facing us and have a plan in place, we are already working on the project that we should be dealing with three years from now,” says Uppal but refuses to divulge details. For now, though, Whirlpool is riding high, and quietly savouring its return from exile.