How do the winners of the two new banking licences - microfinance lender Bandhan Financial Services and infra institution IDFC Ltd - measure up to the challenges of operating as full-fledged banks? 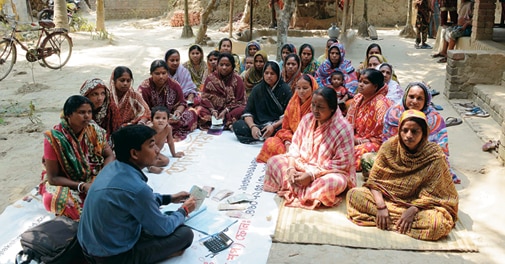 A credit officer from Bandhan collecting the weekly payment from a group of women in Dhamua village, West Bengal

Marufa Laskar, 50, is a zari worker, with four children living in Dhamua village of West Bengal. She also sells readymade children's wear door to door. She is a typical example of the average borrower from Bandhan Financial Services, the Kolkatheadquartered microfinance institution (MFI), which has now been granted a licence by the Reserve Bank of India to get into full-fledged banking. Laskar borrowed Rs25,000 from Bandhan six months ago, and every Friday a credit officer from Bandhan visits her village to collect her weekly installment repaying it. Laskar has never defaulted.

Bandhan, set up in April 2001, has been helping relatively poor people in areas of the country where banks hardly exist, with bulk of the loans ranging from a minimum of Rs1,000-Rs50,000 invested in small businesses such as zari work, tailoring, fish and vegetable selling, running small provision stores and so forth. To turn into a bank it will now have to mobilise low-cost deposits, both savings accounts and current accounts, which will enable it to lower the interest rate on its loans as well. (Currently, Bandhan, like all other MFIs, borrows from banks.) "We are willing to accept even Rs100 as deposit. We will go doorsteps of people to garner deposits," says Chandra Shekhar Ghosh , Bandhan's soft spoken Founder-Chairman. Chandra Shekhar Ghosh, Founder Chairman, Bandhan Financial Services
Bandhan is startlingly different from the other institution that has also been granted a banking licence - IDFC Ltd . In terms of client profile, management bandwidth and asset size, the two are a study in contrast. What they do have in common - apart from plush, glass-and-steel headquarters - is that IDFC too was created to satisfy another unmet need of growing India: encouraging private sector involvement in infrastructure development. IDFC was formed in 1997, following the recommendations of an expert group on commercialisation of infrastructure projects chaired by Rakesh Mohan, later RBI deputy governor.

Why get into full-scale banking? "IDFC has a very significant footprint in the corporate landscape but we are able to provide only a very narrow class of products (only term loans) to that client base," Rajiv Lall, Executive Chairman, said at a conference call with analysts a year ago. "Converting into a bank opens up the opportunity to serve an existing client base with a range of new products that today go to banks and other institutions."

WHY THESE TWO
The choice of Bandhan and IDFC by the RBI as the first two to be granted bank licences among the 26 which had applied, has surprised many. Among those still waiting are biggies such as the Aditya Birla Group, the Reliance ADA Group, the Bajaj Group, the Shriram Group, L&T Finance, Indiabulls and LIC Housing. Why these two? "A question the regulator had been grappling with was how to avoid creating replicas of existing private sector banks," says a person who has been close to the process. In the last two decades, the RBI has cautiously allowed a dozen new banks to emerge, but of the seven which have survived - and whose share of deposits and lending in the entire banking sector is around 15 per cent - most are indeed clones of the banks which already existed, offering the same services. Given their background, Bandhan and IDFC are expected to be different.

The RBI is also undecided about whether granting banking licences to big corporate houses is a desirable step. RBI Governor Raghuram Rajan had said, when earlier he was advisor to Prime Minister Manmohan Singh: "I think the old RBI policy of not allowing corporate banking licences was a good one. I still stand by that." So too his predecessor D. Subbarao had sought changes in the RBI to give it the additional power of superseding the board of a bank if required, in order to protect the interests of depositors, before corporate houses were allowed into the sector. Besides, corporate houses are unlikely to set up banks any different from the existing ones. Some claim the Tata and Videocon groups withdrew their banking licence applications because they anticipated an unfavourable response.

In his 2010 Budget speech that first announced the intention to grant more banking licences, then finance minister - and now President - Pranab Mukherjee had clearly stated that this was being done to extend the geographical coverage of banks and improve access to banking services. Banking penetration is much higher in the south and west of the country than in the north and east - this lowered the chances of the entities from these parts which had applied, the Shriram Group or gold loan company Muthoot Finance, for instance, of getting licences. In contrast, only three banks have their headquarters in eastern India - United Bank of India, UCO Bank and Allahabad Bank, among which UBI is in all kinds of trouble for its reckless lending - which could well have worked in favour of Bandhan getting its licence. There are just 54 credit accounts per 1,000 population in eastern India, almost half the average of the rest of country. In Laskar's village Dhanua, for instance, the State Bank of India (SBI) opened its first branch last year, while Bandhan has been there for seven to eight years.

Besides, no established bank will, like Bandhan, loan sums as low as Rs 1,000 - which is the amount Laskar first sought in the mid-2000s to invest in her zari work - nor will it do so without seeking collateral, as Bandhan does. "Financial inclusion doesn't mean just opening a bank account, but also providing credit," says Rajeev Arora, Director at FINO PayTech, which has the largest banking correspondent network in the country. For Laskar, the Rs1,000 loan, duly repaid, was followed by a loan of Rs5,000, then Rs8,000 and finally Rs25,000.

The choice of IDFC is more easily explained. It is clearly to help and support the government in meeting its target of getting investments totaling $1 trillion in the next five years. "IDFC as a pure independent financial institution with management bandwidth was a clear front runner. The two licences actually balance each other out: one is retail oriented, the other is a wholesale banking player," says Abizer Diwanji, Banking and Financial Services Head, at consultancy firm EY, formerly Ernst & Young.

TRUST FACTOR
Bandhan's business model so far has revolved around lending only to groups of women, numbering 10 to 30, in unbanked areas. "This helps recovery if there is a default," says Partha Pratim Samaanta, Deputy General Manager, Bandhan. Money is given solely to support income generating assets like zari work. This is not the same as lending to women's self-help groups, which some banks also do - in the latter case, all the women have to be engaged in a single business activity. Bandhan's success is mainly because of the trust it inspires. "All financial deals require trust on both sides," says Ghosh, who worked with close to two dozen NGOs before starting Bandhan. "You also need discipline." Rajiv Lall, Executive Chairman, IDFC
Bandhan too initially began as an NGO, but converted to a non-banking finance company (NBFC) in January 2006. It has an asset base of Rs6,769 crore, with a presence in two dozen states including West Bengal, Tripura, Assam, Bihar, Jharkhand, Uttar Pradesh and Maharashtra. It was in 2009 that Ghosh felt the need to further scale up the business. "The issue was how to offer loans at a comparatively low interest rate to people," Ghosh adds. Since Bandhan borrows from banks to lend to its customers, its rates cannot drop beyond a point. Borrowers like Laskar end up paying 22.90 per cent while bank customers in comparison pay 16-18 per cent on a personal loan. But once it turns into a bank, Bandhan will have its depositors' funds too. "I will be able to offer a lower interest rate if I manage to raise low-cost current and savings accounts (CASA) at five to six per cent as a bank," says Ghosh, 57.

For IDFC, there were two main reasons for converting into a bank. With its entire loan portfolio in the infrastructure sector, it was, given the downturn, facing challenges in raising assets. As a bank it will have a much lower capital adequacy requirement than as an NBFC - nine per cent against 12 per cent. "This will allow IDFC to undertake higher leverage or grow its assets to several times its equity, translating into higher returns in terms of return on equity," says Suruchi Jain, equity analyst at Morningstar India.

Second, IDFC was already competing with banks - banks too fund infrastructure projects - but with the handicap that banks could charge lower interest. "Risk funding increases for an NBFC once it attains a certain size because of the wholesale nature of the borrowings," says Lall. It was indeed the growing delays in the completion of infrastructure projects - due to the downturn, policy paralysis of the government, environmental concerns and land acquisition problems - that led IDFC to consider turning into a bank. "It was the next logical step as IDFC faced the consequences of concentrated portfolio in a single segment," says Diwanji of EY. IDFC needed a banking platform too because it had diversified into the retail business like mutual fund and needed bank branches to sell these effectively.

HURDLES AHEAD
The transition to a bank, however, is not going to be easy. Banks have mandatory obligations - there is priority-sector lending, there is the requirement of rural branches, there is statutory liquidity ratio (SLR) and cash reserve ratio (CRR) to be maintained which basically means leaving assets idle. Bandhan will have no problems with priority sector lending or rural branches for, as Ghosh points out, its entire portfolio is priority sector compliant while the RBI's requirement is only 40 per cent. "We only need to meet the SLR and CRR requirements," says Ghosh. Opening more branches will certainly be a major task for IDFC, which currently has only four. It will also have to invest 23 per cent of its funds in government securities under the SLR requirement, which will be a whopping sum given its balance sheet size of Rs71,059 crore. Lall admits the next three years will be spent in achieving compliance, geographical expansion and experimentation. "We are not focused on balance sheet growth in the first three years," Lall says. Profitability will be under pressure as capital goes into opening branches, buying technology and hiring people. Rating agency India Ratings expects IDFC's profitability ratios, especially return on assets and return on equity, to drop sharply in view of the SLR, CRR and other regulatory requirements. (See New Garb).

Bandhan is banking on converting its 5.5 million borrowers into savings bank customers. In comparison, HDFC Bank has 18 million retail customers. But this is easier said than done. The trust factor may work for it in the east, but not beyond that. The other challenge will be to diversify the lending from small and unsecured amounts to large amounts against collateral to protect the interest of depositors. Also, Bandhan has to follow strict lending norms; lending will get more complicated than its present one-page loan application form.

The duo has a year and a half's time to set things in order. But a lot of additional responsibility has now descended on them.