Like John Kerry four years ago, Barack Obama is another US Democratic presidential candidate who appears to be threatening to put a spanner in IT outsourcing. Is he serious? The Indian industry, however, feels it is a mere political rhetoric as there are not enough skilled resources available for IT in most of the advanced nations. T.V. Mahalingam reports. 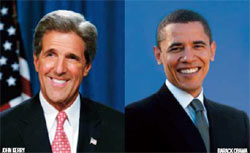 Click here to Enlarge
When Senator Barack Hussein Obama II, the US Democratic presidential hopeful, spoke these words during his acceptance speech, more than a few people in the Indian IT industry would have sat up and noticed. Not that Obama was saying anything new—he had said exactly the same thing several times during his earlier face-offs with Democratic rival Hillary Clinton. But at that time he was still a long way away from the White House. Not anymore.

Moreover, keen IT industry watchers would have got a vague sense of déjà vu. John Kerry, the Democratic presidential nominee in 2004, had launched into a blitz against outsourcing US jobs to ‘cheaper location’ like India. Sections of American media (led by a vitriolic Lou Dobbs) got into the fray. And the O-word (outsourcing) became the most reviled one. Back then, the industry was limping back from a slowdown caused by soaring oil prices, and a super-strong rupee (it appreciated 9 per cent against the dollar in 2003-04) and global political uncertainty in the aftermath of the US invasion of Afghanistan.

Overall sentiment and IT spending in the key sector of banking, financial services & insurance (BFSI) was down. The scenario is a bit different today, at least on the currency front: The rupee has bounced back from Rs 39 four years ago to Rs 45. But the overall outlook hasn’t changed that much: spending in the BFSI vertical isn’t expected to pick up in a big way (thanks to the US subprime-related woes), and industry body NASSCOM has projected a muted exports growth of 24 per cent for 2008-09.

Yet, even as challenges of growth stare Indian IT services in the face, the biggest change since 2004 is reflected in the very nature of the industry, especially on the outsourcing front. Consider: back then, India had just two billion-dollar IT companies (TCS and Infosys). Today, half a dozen firms, including Satyam, Wipro, HCL Technologies and Cognizant, have strolled into that elite club. The industry itself has grown in size and scale. Total software and services revenues stood at $16.7 billion (Rs 75,150 crore then) in 2003-04. By March 2008, they had more than trebled to $52 billion (Rs 2,23,600 crore). 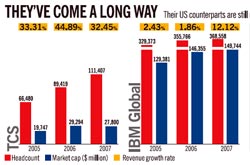 Som Mittal
NASSCOM President Som Mittal believes that a lot of that has to do with Indian players increasing their breadth of service offerings. “If you take BPO (business process outsourcing), we have begun offering end-to-end services. In the past, we could offer only a few activities of the whole process.” Mittal cites the example of supply chain: in 2004, most of the industry could offer services in only 14-16 processes out of 100 total processes. Today, that’s up to 43. “It’s a very different industry,” says Mittal.

S. Mahalingam
The industry has also diversified its revenues on the geographical and vertical front. Back in 2004, more than half of the industry’s revenues came from the BFSI segment— today just about 40 per cent comes from that vertical. Says Hari T, Head (Global Marketing & Communications), Satyam Computer Services: “Satyam has steadily diversified its sources of revenue to help moderate downturns in any one—or even several— areas.” Example: even as financial services is in the doldrums, Satyam’s energy vertical is showing strong growth. “Our largest management consulting practice focusses on the energy sector, and we serve energy clients across the whole value chain—from exploration and generation to retail and distribution.

We now serve clients in 20 different industry sectors,” adds Hari. Geographically, with revenues from Europe and Asia-Pacific kicking in, the industry’s dependence on US revenues, too, has come down from 2004 levels. European revenue contribution has gone up from about 22 per cent in 2003-04 to a little over 30 per cent, even as US contribution has come down from almost 70 per cent to 61 per cent over the same period. “As companies are establishing beachheads in Europe, their revenue base is also increasing. In future, as they expand in geographies like China, Africa, Japan and West Asia, diversification will happen even further,” adds Mittal.

Hari T
Infosys CFO V. Balakrishnan sees more geographies participating in the industry’s growth. “There is greater opportunity for growth in India, China, West Asia, Australia and Canada. Some countries such as Germany, France and Japan, which are traditionally more inward-looking, are slowly opening up towards offshoring and may be great markets to look for growth,” he says.

Yet, if the Indian IT services industry has so much going for itself, why then is NASSCOM treading with caution with its growth projections? Industry honchos explain that the lower estimates are an indicator of how far the sector has come. Says TCS CFO S. Mahalingam: “We (TCS) have grown from $1 billion (Rs 4,300 crore) to $4 billion (Rs 17,200 crore) to $5.7 billion (Rs 24,510 crore) in very quick time.

V. Balakrishnan
As the base increases, the question is: how do you manage growth at that level? At 30 per cent growth, you are essentially talking about an increase of a billion dollars!”

If the Indian industry is losing sleep over Obama’s rhetoric, it isn’t showing any signs of insomnia. “It (political rhetoric) happens every four years during presidential election time. But, the economic reality is that there are not enough skilled resources available for this industry in most of the advanced nations.” Getting Bangalored isn’t likely to fall out of the lexicon in a hurry.