On March 31 last year, Hyderabadbased IVRCL Ltd won a contract from the National Highways Authority of India (NHAI) to develop a 121-km stretch of road between Rajahmundry and Gundugolanu in Andhra Pradesh. Almost a year later, the company has still not managed to arrange bank loans for the Rs 1,617 crore project. The delay is because of a dispute with the NHAI over an irrigation canal which has to be shifted.

"The question is who bears the cost of shifting it," says S. Ramachandran, Director for Business Development at IVRCL. He adds that IVRCL recently got bank loans for another project "with great difficulty".

IVRCL is not the only company finding it difficult to arrange bank loans for road projects. More than half of the 49 projects awarded by the NHAI in 2011/12 have yet to tie up debt. Roads are the second-biggest infrastructure segment in India after power. The government has projected an investment of $1 trillion (a trillion equals 100,000 crore), in the infrastructure sector between 2012 and 2017. Bank loans are critical to meeting this target as debt accounts for 75 to 80 per cent of the total cost of infrastructure projects while equity funding constitutes the rest.

However, contractual disputes, delays in environment approvals, and problems in land acquisition have made banks cautious in lending to road projects. Gross bank credit to the roads sector was Rs 1.26 trillion at the end of December 2012, according to data from the Reserve Bank of India (RBI). This was up 16 per cent from a year earlier but down sharply from the 28.3 per cent growth recorded in 2011.

This has left even the central bank worried. "Investment in [the] road sector has collapsed in 2012/13, with scant interest in new projects, large delays and poor execution in existing projects," the RBI said on January 29 in its macroeconomic review for the October-to-December quarter. It added that, as of November 1, 2012, nearly half of the 563 central government infrastructure projects of Rs 150 crore and above were facing delays and that most of such projects were in power and roads sectors.

"Even the projects being awarded on engineering, procurement and construction basis - where the state bears the cost - are making little headway. This is because the new legal framework calls for upfront environmental clearances for even small stretches of land, before private contractors execute the project," the RBI said.

The problems have led to a sharp slide in the number of projects awarded by the NHAI. In 2011/12, it awarded 49 projects on a build-operate-transfer basis whose total length added up to a record 6,491 km. So far this year, it has awarded only eight projects with a total length of 837 km (see Drastic Drop), according to its website. This is a tad more than a tenth of its target. Developers say four of those eight projects had only one bidder.

"Banks have clearly put the brakes on lending to the sector," says the head of a large highway development company. "Whenever we bid for an NHAI project we factor in a delay of 12 to 18 months." The executive, who does not wish to be named, says his company has been trying to raise funds from investors overseas too, but with little success. "It's very, very difficult," he says.

The involvement of nodal agencies (like NHAI) is not over the moment the tender for a project is out.

C.P. Joshi, Minister for Road Transport and Highways, admits that road projects are facing problems in getting bank loans. "The banking sector does not lend money unless and until 100 per cent of the land is acquired for the project," he says.

Bankers, however, are loath to admit that they have reduced lending to the sector. "We have not curbed road sector lending," says M.S. Raghavan, Executive Director, Bank of India. He says the main problems relate to land acquisition and government clearances.

Environment Minister Jayanthi Natarajan, at a press briefing on February 5, dismissed complaints that her ministry is responsible for delays in infrastructure projects. She added that protecting the environment is not an impediment to projects.

Parvesh Minocha, Managing Director for transportation at consulting firm Feedback Infra, says the NHAI should ensure timely acquisition of land and help developers with other clearances. "The involvement of nodal agencies (like NHAI) is not over the moment the tender for a project is out," he adds.

It is not just debt that has become harder to mobilise. Developers are also finding it tough to attract private equity (PE) firms. PE investments in the roads sector fell by more than half to $292 million in 2012 from the year before, according to research firm Venture Intelligence. No doubt, total PE investments in the country also dropped in 2012, but by 14.5 per cent. "Private equity players are not serious about investing in roads at the moment," says Arun Kumar Sharma, CEO, GMR Highways.

GMR Highways, a unit of GMR Infrastructure, exited the Rs 7,200 crore Kishangarh-Udaipur-Ahmedabad project, NHAI's largest, in early January, citing delays in environmental and forest clearances. GMR was followed by GVK Power & Infrastructure, which recently terminated its agreement for a Rs 3,000 crore project in Madhya Pradesh on similar grounds. However, NHAI Chairman R.P. Singh has been reported saying that GMR exited due to its own financial problems and not because of the delays in clearances. He did not respond to Business Today's questions.

Industry executives feel more developers could walk out too, as economic and financial conditions have worsened. "To prevent that, the government has to set up a restructuring commission to look at projects which have become unviable because of the slowdown in the economy and the tighter lending conditions by banks," says the head of the big highway developer quoted earlier.

With the economy unlikely to revert to a high-growth path anytime soon and banks remaining wary of lending, the road sector's prospects are expected to worsen before they get better.

WHAT THE LEADERS HAVE TO SAY: 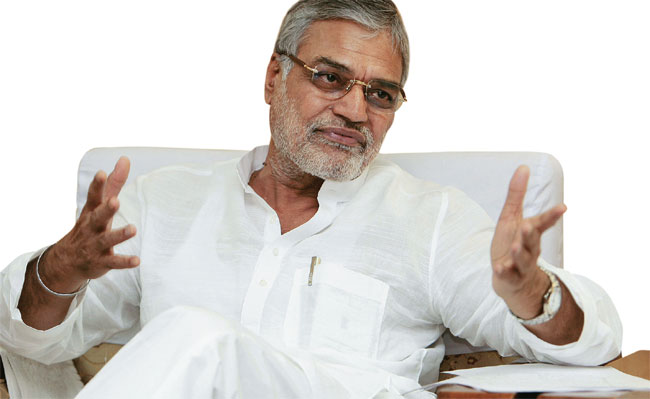 'WE ARE NOT GETTING BIDDERS FOR A LARGE NUMBER OF PROJECTS'
C.P. Joshi, Minister of Road Transport and Highways, admits to Sebastian P.T. that the roads sector is going through tough times, but says he expects the situation to improve soon. Edited excerpts from an interview:

Q. The latest Reserve Bank of India quarterly report expresses concerns over delays in road projects…
A. I have not gone through the RBI report and I will not be able to comment on it. However, it is true that we are facing problems. We are not getting bidders for a large number of projects.

Q. Is the delay in environmental clearances the main problem facing road projects?
A. There are other problems such as the concessionaires facing the problem of equity. Initially, when the economy was growing at nine per cent, bankers lent liberally and the concessionaires took advantage of this and invested not in just the road sector but also in other infrastructure sectors. But the dip in global economic growth has had an effect on our domestic market, too. The environmental clearances come into play during the operational part of the project… As even earth has been declared a mineral, we have to take the permission of the mining ministry as well as the ministry of environment and forests. This was not so earlier. Now, till both the clearances come, we are not able to construct roads. That apart, the banking sector does not lend money unless and until 100 per cent of the land is acquired for the project.

Q. How do you plan to get out of this problem?
A. We have been interacting with the concessionaires, identifying the issues and raising them at the appropriate level. In course of time, we hope to settle the issues.

Q. What is the road-building target that you can meet?
A. This fiscal year we plan to award 4,000 km of roads through the engineering, procurement and construction (EPC) mode. Here, you do not need environment clearance, by and large... Unfortunately, as the EPC documents were cleared only in the middle of the recent Parliament session, we could start preparations only after that... If things go as per our expectations, we should be able to award more than 5,000 km of projects. But these are entirely dependent on procedures that would take about a month and a half.

Q. One of your predecessors had set a target of laying 20 km of roads per day. What do you think is a reasonable target?
A. It was an intention mentioned in an entirely different economic scenario during 2006/07 and 2007/08. Even if you have the intention to go in for 20 km per day, you are dependent on extraneous factors. We hope things will change in the next fiscal year. Before we go to the polls, we hope to achieve that target. 'ALL PROJECTS THAT CAN BE CLEARED, HAVE BEEN'
Jayanthi Natarajan, Minister for Environment and Forests, lashed out at her critics at a press briefing on February 5, saying her ministry was not responsible for delays in roads and other infrastructure projects. Edited excerpts from the briefing:

Q. On complaints that her ministry is blocking economic development:
A. The Ministry of Environment and Forests (MoEF) is a partner in the country's development and protecting the environment is an important part of this partnership. Under the Forest (Conservation) Act, 1980, projects requiring land between one and five hectares have to be cleared by states. Such projects constitute 74 per cent of the total. Projects needing land between five and 40 hectares are cleared by the MoEF's regional offices. These projects make up 17 per cent of the total. Only nine per cent of the proposals come directly to the MoEF. It is a stretch to say that, with just nine per cent of clearances, we are the cause of the bottleneck in economic development. This is not the case. All projects that can be cleared have been cleared.

Q. On speeding up processes for approvals:
A. The MoEF has issued about seven or eight orders to speed up approvals. These include orders to allow parallel processing of environment and forest clearances. Linear projects such as roads, pipelines and transmission lines will be exempt from seeking approvals from village councils, which is otherwise mandatory under the Forest Rights Act.

India Inc makes the most of the Maha Kumbh