Two decades after entering India, Microsoft is changing tack. Though its renewed push has coincided with the economic slowdown, the changes in the company’s strategy are for the long term. Rahul Sachitanand reports. 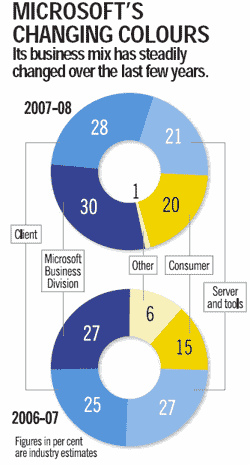 Till just three years ago, D. Senthil Kumar of DSP Knitting used to haggle on the phone for orders, and battle with bulky ledgers for tracking raw materials, inventory and staff—when he wasn’t travelling long distances for meetings. Based in the nowin-distress Tirupur textiles hub in Tamil Nadu, DSP Knitting was earning around Rs 7 crore a year. Life began changing in 2006, after a meeting organised by the government at his industry cluster.

Microsoft’s people offered an array of solutions. After the first set of computers, for bookkeeping, came Microsoft’s Project Vikas, developed by its local partners. More applications specific to the cluster were developed. So DSP Knitting was soon using the portal set up under Project Vikas to hunt for cheap raw materials, look for buyers and even to hire talent or tap finance.

Scores of companies, all firsttime computer users like DSP, are today using the Net-based applications, including one that calculates the exact amount of cloth required to fill an order. And when senior managers have to travel, they can log into their ERP system from remote locations to keep abreast of orders. The result: savings of lakhs of rupees. As Kumar says: “Microsoft’s partners were able to build solutions to solve problems intrinsic to the textile industry.”

What Kumar does not realise is that Microsoft also benefits by helping entrepreneurs like him. Says Craig Mundie, Microsoft’s Head of Strategy and Research and its India Sponsor:“Back in 1990, we approached the market in a different way with our traditional products. We have now developed different products or business models to suit the Indian market (See interview on page 74).” 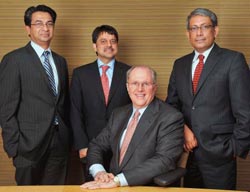 (L to R)Rajan Anandan, Hemant Sachdev, Craig Mundie, Ravi Venkatesan
New Storyboard
Welcome to Microsoft India, circa 2009. If its Founder Bill Gates is a firm believer in C.K. Prahalad’s theory of a fortune at the Bottom of the Pyramid, Microsoft India is discovering exactly that— driven as much by conviction as by circumstances.

It has come a long way since 1990, when it opened a modest office in Delhi to sell its disk operating system and Windows 3.0. Poor PC penetration, pricey software, limited access to IT and low Internet connectivity hobbled its initial steps. So, along the way, it had to modify Gates’ initial ambition of putting a PC atop every desk, trek to small towns, and befriend the small and medium enterprises (SMEs) that form Indian industry’s backbone.

One of Microsoft’s biggest challenges has been the consumer market. “The consumer market is a huge untapped opportunity for Microsoft... 65 per cent of India’s GDP is from private consumption, but we make virtually no money from this market,” says Venkatesan.

Growth has been stunted: in 2007-08, Microsoft India’s revenues from its marketing business were around Rs 3,263 crore, and are expected to hit Rs 3,800 crore this year. Its China’s revenues are almost double. India revenues are tiny for Microsoft (global revenues $16.6 billion or Rs 83,000 crore for its second quarter this fiscal), but with its global top line growing at just 2 per cent, Microsoft has been focussing more on emerging markets.

Since 2003, Microsoft India’s headcount has grown over 10-fold, from below 450 to over 5,000 this year. All the same, India, from being just another market, has, along with China—where Microsoft opened in 1992—become a growth driver and “a key strategic market,” according to Mundie.

The biggest hurdle in making inroads into the consumer market isn’t the popularity of the product, but piracy. According to estimates from NASSCOM-BSA, the piracy rate in India has come down marginally from 74 per cent four years ago to 69 per cent this year. (IT dealers say piracy of popular Microsoft products could be as much as 85-90 per cent.)

“Piracy is the one challenge that keeps me awake at night,” says Rajan Anandan, the former Dell India Head who moved to Microsoft India as Managing Director in September last year. Microsoft’s efforts—from security keys to destruction of pirated software—to foil piracy, have been thwarted by the high cost of original software and the flourishing grey market. It is now betting on the user-experience of its low-cost starter and basic editions. “The rate of piracy will change only when there is increased respect for intellectual property,” says Venkatesan.

Then, there is the challenge from open source software based on Linux, with firms like Red Hat making significant inroads. Governments are opting for open source. Their spending on e-governance initiatives could add up to Rs 23,000 crore over the next few years. “We see strong growth and interest in our solutions from the government, manufacturing and small business sectors,” says Venkatesh Hariharan, Director, Corporate Affairs, Red Hat, India.
TweetYoutube

Will rivals ride on pent-up demand?