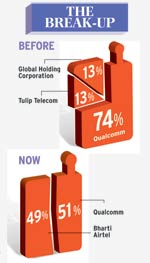 Click here to Enlarge
Bharti, which has already launched BWA services in Kolkata and Bangalore, paid $165 million, or Rs 924 crore, to acquire Tulip and Global Holding's combined 26 per cent stake and rest by way of fresh equity.

The deal is a crucial milestone for Bharti, India's biggest phone services firm by revenues and customers, and is expected to shape the contours of the nascent data services industry in India.

For Qualcomm, the reason to buy BWA licences - it has done similar deals in the United States and Britain - was only to steer services towards its so-called Long Term Evolution (LTE) technology, which is seen as the clear choice of network operators when it comes to offering wireless data services.

"Qualcomm's investment in the BWA venture was to accelerate the deployment of LTE," said Avneesh Agrawal, President, India & South Asia, and Senior Vice President, Qualcomm, at an event before the Bharti deal announcement.

An industry executive who has been following Qualcomm's moves said the company's bids were aimed at winning in Delhi and Mumbai, areas with the highest data traffic in India.

Access to these two circles is the big gain for Bharti, which won four BWA licences in the 2010 auctions. Wireless Business Services's other two licences in Haryana and Kerala give Bharti access to markets it was not present in.

The acquired licences take its count of circles with BWA licences to eight - positioning it better to fight Mukesh Ambani-controlled Infotel, a 4G aspirant with 22 licences. 3G PROGRESSION
The other benefit of the deal is that Bharti gets access to scarce wireless frequency. Telecom operators, who bid nearly Rs 1 trillion (one trillion equals 100,000 crore) for third generation (3G) licences, received rights to just 5 megahertz (MHz) of spectrum each.

With an acute spectrum scarcity affecting voice services on current second generation networks, operators who won 3G spectrum have been routing voice traffic to such frequencies. This has resulted in poor data access speeds that would have otherwise been delivered on 3G spectrum.

This is where BWA licences, which come bundled with access to 20 MHz spectrum capacity, become valuable. When voice traffic on 3G networks increases substantially, the data can be sent and received over LTE networks.

"This will provide opportunities to operators to do optimal way of routing the traffic," says Mohammad T. Chowdhury, telecom industry leader at PwC.

Others believe big customer uptake in the immediate future will come from customers using data cards with notebook computers.

"The biggest near term impact of LTE will be on data cards. Airtel will also do the same - drive their data card business with LTE," says Dunigan O'Keeffe, who heads the India telecom practice and Asia strategy at consultancy Bain & Co.

Data as a business may be very small today but in a nation with low Internet penetration, mobile data services hold huge promise. By 2015, a Qualcomm presentation estimates that there will be 112 million 3G users and another 16 million LTE users in India.

Further, given that LTE is the next stage of 3G technologies, offering both services on the same device - smartphones or tablets - is already a reality. Qualcomm not just receives proportionate royalty on LTE devices sold, it can count on two of India's biggest bets on 4G being made on LTE - Reliance's Infotel and Airtel.

Plus, it had made a handsome premium on the cash it invested to acquire its BWA licences. By end of 2014, it expects to exit the joint venture and completely hand it over to Bharti.

Companies like Nokia Siemens Networks which bought Motorola's network business have started offering LTE networks and devices and will soon start shipping them. "We will be providing our devices to Bharti for their TDLTE network in Maharashtra," says Samar Mittal, Head of Sales Development at NSN.

Meanwhile, according to the industry executive quoted earlier in this story without name, Bharti is in talks with Augere, which holds one of the two BWA slots in Madhya Pradesh.