The inability of the Navratna PSU to meet delivery deadlines on power generation equipment is one of the primary reasons for the country's power defecit. However, K.R. Balasubramanyam tells us that BHEL may still prove the sceptics wrong.

Y.S. Ratra is very upset. The Chairman of Punjab State Electricity Board (PSEB) has just finished reading a status report on his organisation’s ongoing expansion programme. The plan to add 250 MW at Lehra Mohabbat in Bathinda by March 2006 is 15 months behind schedule—for reasons entirely beyond his control. 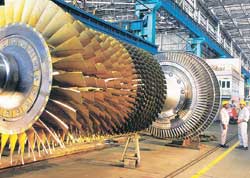 BHEL plant at Haridwar
Power equipment supplier and Navratna PSU Bharat Heavy Electricals (BHEL), which is supplying the critical boiler, turbine and generator (BTG) package for the project, has indicated that supplies will be delayed by another three months. As a result, PSEB’s projections on capital expenditure, incremental capacity and revenues will have to be revisited and reworked.

“I am very doubtful about the new timeline, because BHEL has never delivered on time in the past,” he says, adding that the delay is costing PSEB Rs 3.6 crore a day. Caught between angry consumers and BHEL, he has slapped a penalty of Rs 92 crore on the latter.

Replace PSEB with any of BHEL’s other customers—like the National Thermal Power Corporation (NTPC) or Maharashtra State Electricity Board—and it’s more of the same. BHEL is India’s premier engineering company, and manufactures high quality power generation equipment, but many experts blame it for the country consistently missing the incremental power generation capacity targets year after year.

K. Ravi Kumar
As on March 31, 2008, the company had orders worth Rs 85,500 crore, about four times its revenues for the year. Now for the downside: its delivery timelines have risen from 12-14 months three years ago, to 44-48 months now. “The country needs many more BHELs if the sector is to grow at anywhere near the rates it has to,” says NTPC Chairman T. Sankaralingam.

He has a point. Even the Ministry of Power (MoP) believes that the inability of BHEL, which accounts for about 64 per cent of the Indian market for power generation equipment, to deliver on schedule is one of the primary reasons for the country’s power deficit.

The Planning Commission estimates that India will need 244,000 MW of peak power supply by 2013 if the GDP is to grow at 10 per cent a year. During the 10th Plan period (2002-07), the country added only about half the targeted additional capacity of 41,110 MW. The 11th Plan (which runs from 2007-12), too, has begun with a grand miss—generating companies added 9,283 MW against the targeted figure of 16,355 MW in 2007-08. That puts a big question mark over the 11th Plan target of adding 78,577 MW capacity. “The biggest task ahead of us is to reverse the trend of overpromising and under-delivering. It is absolutely shocking,” Jairam Ramesh, newly-appointed Union Minister of State for Power, was quoted in the media as saying soon after assuming charge of his ministry.

There is, thus, a yawning gap between the demand and supply of electricity generating equipment, and given current trends, this is likely to grow as many more power projects are conceived of and implemented, both in the public and private sectors. Not surprisingly, foreign power equipment suppliers, like ABB (Sweden), Ansaldo (Italy), Doosan (South Korea), Hitachi and Toshiba (Japan) and Power Machines (Russia), are staking out the Indian market.

BHEL Chairman and Managing Director K. Ravi Kumar puts up a brave public face. “We’re not afraid of competition,” he says. But the ground reality is that BHEL, which is struggling with capacity constraints— a function of flawed planning— is hard put to maintain its existing market share of about 65 per cent. It has already lost several large contracts, most notably the Tatapromoted ultra mega power projects (UMPP) at Mundra to Japanese rival Toshiba Corporation.

Says P. Ramesh, Managing Director (Energy Division) of infrastructure consultancy firm, Feedback Ventures: “A number of private power projects may switch to Chinese suppliers, because their equipment is a lot cheaper; and, more importantly, they deliver in about 30 months.” This trend, say generating companies, is an idea whose time has come. “The reality is that most private sector players are selecting imported, mainly Chinese, equipment. To that extent, the delays at BHEL will impact mainly NTPC and other state-owned generating companies,” observes Arvind Mahajan, Executive Director, KPMG India. M.V. Subba Rao, Director, GMR Group, puts the issue in perspective. “Generating companies are required to deliver cheaper electricity. The cost of power will go down only when equipment costs go down,” he says.

Then, the Indian market is very price-sensitive. “There is no premium for quality in India,” says Ramesh. That may be one reason— and a big one at that—why cheaper Chinese equipment, which is perceived to be of lower quality than those produced by BHEL, is in such demand. However, sections of the Indian establishment are wary, perhaps with good reason, of increased Chinese involvement in as critical a sector as power. But it has been an even tussle till date, and neither side has been able to deal a knockout punch to the other.

Foreign companies apart, BHEL will soon face competition at home as well. Infrastructure and engineering major L&T has tied up with Japan’s Mitsubishi Heavy Industries to set up a manufacturing facility in India for steam turbines and generators. The venture will go on stream in 2012.

But BHEL hasn’t been idle. It has proactively pursued deals that will give it steady orders and keep its production lines humming. There’s also a buzz about BHEL and Reliance Power forming a joint venture to manufacture power generation equipment.

Anil Ambani has aggressive plans of toppling NTPC from its numero uno position in the power sector. So, if the JV between the two does take off, it will get a long-term customer in one of its promoters.

Last year also saw the coming together of the two sparring PSU giants: BHEL roped NTPC into a JV that leverages their respective strengths. The venture will manufacture power equipment and bid for EPC (engineering, procurement, construction) contracts. BHEL is also tying up with state electricity boards (SEBs) to develop power projects.

It is setting up a 1,600 MW thermal project in Udangudi in Tamil Nadu in a JV with the Tamil Nadu Electricity Board (TNEB). “We’re also in talks with SEBs in Orissa, Karnataka, Gujarat and Uttar Pradesh,” says BHEL’s Kumar.

A look at BHEL’s order book position reveals that the demand from the power sector was somewhat sluggish till three years ago, and picked up only after the government announced mega targets.

But can BHEL, whose equipment generates power that lights three out of every four Indian homes, deliver? Says Kumar: “We will reach the 11th Plan goals, and within time.” The company is expanding its capacity from 10,000 MW per annum at present to 15,000 MW by December 2009, and has planned a capital investment of Rs 4,200 crore for the 11th Plan period ending 2011-12.

CII Principal Advisor (Energy) V. Raghuraman sees big opportunities ahead for BHEL. “Earlier, BHEL was making equipment of assorted sizes and specifications because of lack of other orders. Its ability to deliver was hampered by such customised orders and the absence of bulk orders. If it now standardises its specifications and sizes, like Chinese do, it can easily ramp up its capacity to 15,000 MW a year,” he notes. But, like the rest of India Inc., BHEL, too, faces a shortage of skilled staff. As more and more players plan to enter the power equipment sector, BHEL will have a tougher time retaining skilled professionals. The company has said it will recruit 16,000 people over the next four years.

Investors, however, remain divided about BHEL’s long-term prospects. As the company’s provisional results for 2007-08 trickled in on April 3, the stock fell Rs 187 from Rs 1,888 to Rs 1,701 on the BSE. Since then, it has risen Rs 75 and closed at Rs 1,776 on the BSE on April 9. Says Rajesh Jain, Director and CEO, Pranav Securities, a stock broking and research firm: “There is a slowdown in fresh investments on capacity creation. But BHEL has a strong order book and that should stand it in good stead.”

Enam Securities, another leading stock market player, however, has revised its estimates for BHEL’s 2008-09 and 2009-10 earning downwards by 12.6 per cent and 8.2 per cent, respectively, after factoring in higher wage costs and slower growth in its industry segment.

“With the larger part of orders from central and state utilities completed, the private sector is likely to dominate going ahead. These players prefer Chinese manufacturers, which promise better delivery terms (28 months) and quote 25 per cent lower prices. So, retaining market share will be difficult for BHEL,” it said in a note to its clients.

Given India’s ambitious targets in the sector, and BHEL’s track record, that may not be such a bad thing. But as it has done so many times in the past, BHEL may yet surprise everyone and prove sceptics wrong.

How the world measures inflation