Sujoy Ghosh is on cloud nine. The writer-director of Kahaani recently won this year's National Award for Best Original Screenplay and congratulatory calls are pouring in. It has been a great year for Ghosh with the film winning several other awards as well, apart from being a major box office hit. Ghosh had previously made only two films, both of which flopped. Did he expect Kahaani to be such a success? It's a surprise, he admits, recalling the trouble he had arranging funds for the movie. "We were rejected by several studios as they felt Kahaani was an expensive project," he says. Ghosh adds that few were willing to put money on a suspense-thriller with a female actor (Vidya Balan) in the principal role. Kahaani was made on a budget of Rs 11 crore, half the amount estimated initially. Its coproducer, Viacom 18 Motion Pictures, spent another Rs 8 crore on marketing. But this story of a pregnant woman in search of her missing husband earned Rs 27 crore in box office collections. It pocketed another Rs 8 crore by selling satellite rights, and Rs 4 crore from overseas distribution.

Kahaani is one of several small-budget, content-driven films that have succeeded in spite of not having a single top male actor in its cast.

Other such films include Vicky Donor, Paan Singh Tomar and English Vinglish - all of them bringing in unexpectedly high returns. Vicky Donor, co-produced by Eros Entertainment and John Abraham Productions, cost only Rs 5 crore to make. Eros put in another Rs 6 crore on marketing the film. The film raked in Rs 38 crore as revenue. Gangs of Wasseypur Parts I and II, co-produced by Viacom 18 and Anurag Kashyap Films, had a budget of Rs 18.4 crore. The two earned Rs 54 crore from the local market and Rs 5 crore as minimum guarantee for overseas distribution rights. The success of low-budget films is proving an important factor in the industry's growth. The film industry's revenue climbed 21 per cent from the previous year to Rs 11,240 crore in 2012, according to a report by the Federation of Indian Chambers of Commerce and Industry and consulting firm KPMG. The success of low-budget films has also prompted big studios and production houses to take a new look at their business models. Until a couple of years ago, studios such as Eros Entertainment bet mostly on bigbudget films involving top actors such as Shah Rukh Khan and Salman Khan. Not any more. Of the 25-odd Hindi films that Eros plans to release, 12 are in the Rs 5-10 crore budget range. Viacom 18 says almost 80 per cent of its films in 2013 will be low-budget. Disney UTV Studios will have an equal mix of star-driven and low-budget films this year.

"If you invest in a Rs 5-6 crore film and it does not do well, you lose Rs 2-3 crore at the most," says Kamal Jain, Chief Financial Officer at Eros Entertainment. "But if it does well, the upside can be as high as Rs 20 crore." Are low-budget, contentdriven films less risky for studios? Kahaani's Ghosh feels investing in smaller films is a good way to hedge risks. Adds Vikram Malhotra, Chief Operating Officer at Viacom 18: "If you can contain the budget of a film and get great returns, it enables you to invest in more such projects. The return on investment is much higher in smaller films. If the film does well, you could end up making twice the money you invested." No doubt there are dissenting voices as well. Siddharth Roy Kapur, CEO of Disney UTV Studios, agrees that mass acceptance of contentdriven films has brought a new dimension to the economics of moviemaking.

"With every Paan Singh Tomar there has to be a Rowdy Rathore." Paan Singh Tomar, the real life story of an army athleteturned-dacoit, which won the National Award for Best Film for 2012, had Irrfan Khan playing the protagonist. Rowdy Rathore, a typical Bollywood action-comedy, had Akshay Kumar in the lead.

Investing in lowbudget films rather than expensive ones also means more movies can be made without increasing the studio's overall film-making budget. No longer does a studio focus on just one or two films a year. Most, on average, have three to four creative teams which work on several projects simultaneously. Last year, Eros churned out 70 films, including regional movies. Disney UTV and Viacom 18 produce around 20 films a year. This helps them cut business risk. "If one film does not work, we have four others to fall back upon," says Malhotra of Viacom. Most studios want to keep making four to five films with big stars every year hoping to recover whatever losses they make on films that do not succeed. "Editing can be done immediately on location, unlike earlier when editing took a good 60 to 70 days." Greater use of digital technology has also reduced crew size by almost half, saving on salary costs, says Rucha Pathak, Senior Creative Director, Studios, Disney UTV. It has also done away with the need to process the film in a lab after the shooting. Earlier, film processing would take up to two months and the entire filmmaking process as much as a year. Some films took even longer.

Mughal-e-Azam, the epic period film released in 1960, took 10 years to complete. Contrast this with Vicky Donor, which was shot in 60 days. Film-making is not the only process that has gone digital. The film exhibition business has also followed the same path. Until a few years ago most films were released on analog prints which had to be transported manually to theatres. This limited their reach and required a big budget for distribution, which only filmmakers with deep pockets could afford.

Digitisation has enabled transfer of films to theatres via satellite, cutting costs. Again, a digital print costs only Rs 20,000 compared with Rs 70,000 for an analog print, which further reduces expenses. Vicky Donor, for instance, was released in more than 700 theatres. Kamal Gianchandani, President, PVR Pictures, says films such as Vicky Donor and Paan Singh Tomar would probably not have gone for the largescale releases they did had it not been for the shift to digital prints. 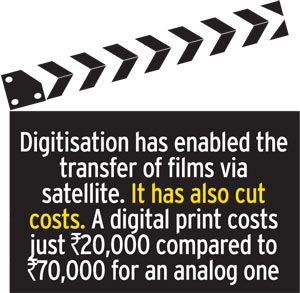 Digitisation has also made it possible for more films to touch the Rs 100 crore revenue mark as prints can now reach theatres in the smallest of towns on the very first day of release. Pankaj Jaysinh, Chief Operating Officer at UFO Moviez, a provider of digital technology to theatres, says digital screens have made movie exhibition "a lucrative, viable business".

Pitfalls
While the studios see merit in making budget films, they are also aware of the pitfalls. In some ways, low-budget movies are more risky than bigbudget ones. Even if a Shah Rukh Khan or Salman Khan film does not perform well at the box office, for instance, it still earns a large amount through pre-release distribution deals, sale of satellite rights and overseas distribution rights. Low-budget movies, however, are able to sell satellite and overseas rights only when they succeed commercially. Finally, it is well known that only around 10 per cent of films made money. The same is true of the lowbudget films that hit the screens last year. For every Kahaani that was a hit, there was an Aiyya that had a disastrous run. Aiyya lost Rs 3.5 crore.

To cut risks most studios prefer not to merely co-produce such films, but to take up marketing and distribution as well. Eros says its future strategy would be to avoid co-production deals for smaller projects. "Sharing intellectual property with a production house for a Rs 5-6 crore film does not make too much sense," says Jain, Eros's finance chief.

Multiple revenue streams and technology may have made it easier to produce and market films. But some risks will always stay. "I do not think risks have come down," says Malhotra of Viacom 18. "At the end of the day we continue to bet on creative talent, which is not consistent."
TweetYoutube
Tags: Bollywood | movies | big studio | low-budget films