The boom in the aviation sector has set the stage for airlines to grow their ancillary revenues.
By Manu Kaushik | Print Edition: December 18, 2016 Jet Airways flies Delhi to London every day. It's an eight-hour flight inside the wide-body Boeing 777. For first class and premiere cabin travellers, it's about experiencing luxury at 40,000 feet above the ground. In the economy class, though, where 308 passengers jostle for legroom and seating space, the journey could be taxing. Jet figured out that some seats with extra legroom - typically emergency exit rows - were grabbed by savvy passengers, and the airline was not able to monetise them. "We saw that some passengers who needed these seats were not able to get them. It is a premium commodity in their eyes," says Prasad Kholkute, VP (Revenue Management) at Jet.

In October last year, the airline introduced a new product - Seat Select - that was aimed at monetising these "premium" seats. Seat Select allows economy travellers to buy seats with extra legroom for a certain fee. "We are seeing tremendous response, especially for long-haul international flights. There are customers who don't want to buy business class because that is out of budget but are willing to spend a little extra (about Rs 3,000) for extra legroom. On some domestic routes, the fee is as low as Rs 300," says Kholkute.

"Earlier, airlines had a casual approach to enhancing ancillary revenues, now it is must. Every airline has a designated person for ancillary business, just like for passengers and cargo segments," says Jitender Bhargava, former executive director, Air India. But some airlines are more upbeat on ancillary services than others. IndiGo, SpiceJet, Vistara and Jet Airways have stolen a march over GoAir, AirAsia India, and regional airlines. In the last financial year, SpiceJet reported the fastest growth in ancillary revenues followed by IndiGo. While IndiGo is largely selling plain-vanilla products (excess baggage, meals, preferred seating), others - such as Jet Airways and SpiceJet - are more innovative and following the global trend of pushing the envelope.

The Times are a-Changin'

The airlines are bringing in a range of products for passengers that are tackling diverse issues like flight delays and cancellations. For instance, in February, SpiceJet launched Fly For Sure scheme that reimburses passengers for a booked ticket (double the booking amount) under three circumstances: a flight is cancelled, delay of over 90 minutes, and missing a flight due to the check-in counter being closed within 30 minutes passenger reaching the airport. The product, priced at Rs 299 for domestic and Rs 499 for international flights, ensures that SpiceJet reimburses double the price of the original ticket to passengers for booking on another airline of their choice on the same route. 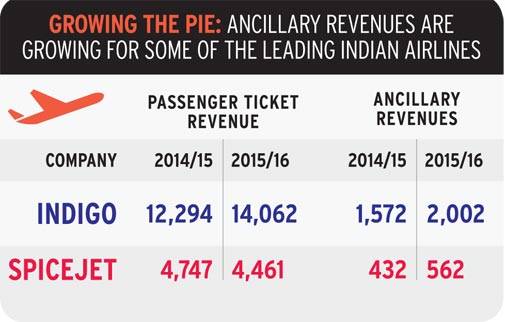 "Nobody has a similar product in the industry or internationally. It's like an insurance product. Life insurance and health insurance penetration are not too high. People say that they will not fall ill, but they invariably do. Similarly, they regret when they miss the flight," says Shilpa Bhatia, VP (Sales, Revenues and Ancillary), SpiceJet. Almost 10 per cent passengers are buying the product.

Consider another example. Given the unpredictability of road traffic in most large cities, passengers tend to leave for airports well in advance of the departure time. Jet Airways recently launched Jet Advance that minimises the overall travel time of a journey. If there's a flight between the time of a passenger's arrival at the airport and the departure of the flight he is booked on, the passenger can take it by paying Rs 1,000, subject to seat availability. Corporates are finding a lot of value in this product, says the airline.

In the past two years, airlines are pulling out all the stops to grow the ancillary business. SpiceJet, for example, has launched eight new products, taking the total count to 14. Similarly, newcomer Vistara started offering a suite of ancillary products and services in August.

The obvious reason for airlines to push the ancillary business is that it's a high-margin category as compared to ticket sales. Preferred seating, priority check-in and priority bag-out have 100 per cent profit margins because airlines don't have to incur any cost. Meals have lesser margins at around 30 per cent as airlines pay to catering agencies. Excess baggage has 60 per cent profitability.

The changed scenario in the aviation sector - low ATF (aviation turbine fuel) prices, high passenger growth - has prompted airlines to expand the ancillary business to gear up for the future. The exponential growth in passenger traffic is a big contributor - airlines have more time to think about other sources of revenues rather than worrying about ticket sales. The fall in ATF prices, which dipped to a multi-year low last year, could enable airlines to drop fares and boost demand. Till the end of 2014, the passenger traffic was growing at just under 10 per cent. In the last year and 2016 as well, the passenger traffic has grown at 20-plus per cent in most months. "Aviation is a cyclical business. The right environment has given headroom to airlines to focus on the ancillary business to overcome adversities in future - high fuel prices, slowdown in revenues and yields. It's a global trend," says an analyst.

IndiGo has grown the contribution of ancillary to its top line from 10.61 per cent in 2009/10 to 12.4 per cent in 2015/16. For SpiceJet, the rise has been steep in recent times - from 6 per cent in 2014/15 to around 12 per cent now. "In a competitive environment, airlines cannot control yields. The fuel costs and employee costs are fixed. To cover the deficit between income and expenditure, airlines are increasingly focussing on ancillary," says Bhargava. 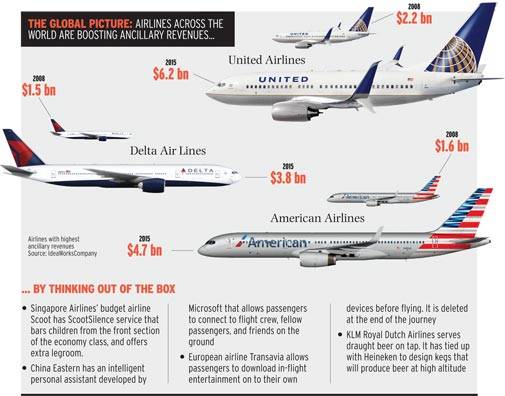 According to global consultancy IdeaWorks, airlines worldwide earned $38 billion through ancillary revenues last year, a jump of $6.6 billion from the previous year. Indian carriers are closely following the footsteps of global airlines - such as American Airlines, United Airlines, Spirit Airlines and Allegiant Air - who earn substantial revenues from products and services other than ticket sales.

But even as airlines have enhanced focus on the ancillary business, their expansion plans have been hampered recently. The aviation regulator DGCA (Directorate General of Civil Aviation) introduced a couple of policy changes that have slowed the growth of ancillary revenues. For instance, the regulator has put caps on excess baggage and cancellation charges in June. As per the revised rules, the airlines are not allowed to fix cancellation charges at more than the base fares plus fuel surcharge. Also, the excess baggage charges have been capped at Rs 100 per kg for 5 kg over the 15 kg that airlines offer for free.

The step has had an immediate impact on IndiGo. In the second quarter of the financial year 2016/17, it had reported month-on-month decline (3.8 per cent) in ancillary revenues. "Our ancillary revenues have been impacted by the reduction in [excess] baggage fee post the change in last quarter. Also, we witnessed lower ticket cancellations and modifications because on account of lower fares, people are booking tickets just a few days prior to the departure," the company said in an analyst call.

Till about the late 1990s, ancillary was a tiny business. Air India had a near-monopoly in the domestic market at that time. It was trying new products and services but the approach was modest. For instance, in 1993, Air India brought satellite phones on flights to Europe and US. The service was discontinued after poor response. In 1992, the airline introduced advertising on in-flight entertainment systems. Before that in-flight entertainment did not generate revenues.

Being a full-service carrier, some of Air India's value-added products, such as food, were already accounted for in ticket prices. The big shift came in mid-2000s when low-cost carriers (LCCs) such as Air Deccan and IndiGo were started. These carriers started unbundling fares, closely following the model of global LCCs. "Cargo business used to be biggest ancillary revenue for airlines till then. For the first time, a flurry of services and products was making way into the Indian aviation," says an aviation analyst. For instance, Air Deccan started painting its Airbus 320 with ads of NDTV and Sun Microsystems. Other services evolved at the same time, including club memberships, access to airport lounges, cancellation charges, seat selection, in-flight sales, in-flight magazines and free distribution of product samples to passengers. "In the early days of aviation, the fares were high but LCCs changed that completely. Now, there's a passenger segment that doesn't want high fares. They want to fly on time, want good schedule and low fares. It creates tremendous opportunity for unbundling of services," says Kholkute.

Upgradation is a thrust area for airlines. Vistara offers class upgrades, which means that economy class passengers can fly in business or premium economy cabins. There are two ways to upgrade: Standby upgrade for substantially lower prices, and confirmed upgrade for a higher rate. "Upgrades serve as an opportunity to increase revenue by augmenting front cabin loads. This is helpful for those whose travel policies may not allow the higher class of travel, so the upgrade can be paid for separately in advance," says Sanjiv Kapoor, Chief Strategy and Commercial Officer at Vistara.

"Earlier airlines had a casual approach to enhancing ancillary revenues, now it is must"

Jet Airways has "randomisation" method through which it is upselling premium cabin seats to economy passengers. If the airline has excess premium seats, it randomly picks names of customers and pushes upgrade offers to them through SMS and email. For some extra amount that is lower than the usual premium cabin rate, they can upgrade. The scheme could potentially offend its premium cabin customers who paid the full price. "We don't want to devalue our premium customers, therefore, we use random techniques in terms of flights and who the offer is going to," says Kholkute.

A bulk of airlines revenues are still coming from legacy products - excess baggage, preferred seating and cancellation charges. The global trends show that as the market matures, passengers try out new products with equal interest. For instance, the onboard Wi-Fi, when it gets the go-ahead from the government, is expected to have significant appeal.

There are some concerns as well, especially in cases where two airlines are involved. Jet Airways, which has codeshare agreements with about 23 airlines, has to ensure that same services are delivered throughout the journey of a passenger. "We work closely with our partners. We have our team that flies as customers and puts itself through all experiences, right from purchasing the ticket to flying and reaching destination. Every time there's discrepancy of service, we fill the gap," says Kholkute.

In the end, an airline needs to understand its brand positioning. The LCCs like IndiGo and SpiceJet may offer products that are unsuitable for full-service carriers like Jet Airways and Vistara. If airlines start charging for everything, it might upset customers. Take the case of European no-frills carrier Ryanair which, in 2010, proposed the idea of charging passengers for using toilets. The airline said that it was thinking about re-configuring aircraft to reduce the number of toilets as well. Since then, Ryanair has become the butt of jokes. Last year, the US Congress had introduced a bill that prohibits airlines from charging passengers to use on-flight toilet. Predicting passengers can be tough. Airlines need to constantly meet their changing demands without affecting the brand.