Bt Cotton all fluffed up

On a hot afternoon late in April, about a dozen of cotton farmers at Halvad tehsil in Gujarat's Surendra nagar district, 160 km southwest of Ahmedabad, are busy cleaning their fields and tilling the soil. The sowing season will begin from the middle of May and most farmers are anticipating the hybrid Bt (Bacillus Thuringiensis) cotton seeds will, like last year, yield a bountiful harvest again.

Ashwin Babulal, a 27-year-old in the group, has been farming Bt cotton since 2003. His cotton cultivation on six acres has given him much higher yields - around Rs 40,000 each acre - apart from reducing his expenses on pesticide by Rs 4,000 per acre. The increased income over the past eight years has helped Babulal build a new house and buy a Rs 3 lakh life insurance policy for his family.

Jethabhai Manjibhai Patel, 56, is one of the biggest farmers in the tehsil. He has been cultivating Bt cotton on his 128 acre farm since 2005. Higher yields and income from Bt cotton crops have vastly improved his standard of living. He has invested in a drip irrigation system, built a huge pucca home for his large family of 20 members and is educating his grandchildren.

Babulal and Patel are not isolated examples. In about a decade since its introduction in 2002, after much initial controversy, Bt cotton has transformed farmers' lives in major Bt growing states like Gujarat, Maharashtra, Punjab and Andhra Pradesh. Today about 60 lakh farmers across the country are planting high-yielding biotechnology seeds and along with improved agronomic practices, have ushered in India's cotton revolution.

India's cotton production has doubled to 30 million bales between 2002 and 2010. Yields have gone up 57 per cent per hectare and area under cultivation has increased 40 per cent to 11 million hectares. India has now become the world's second largest producer and second largest exporter of cotton (behind China). "Indian farmers are astute determinants of value based on quality of yield, fair price, and convenience." says Dilip Sanghani, Gujarat's Agriculture Minister. Most farmers assert that the cost of cultivation per acre has almost halved.

The seed price control by Gujarat and some other states like Maharashtra over the last two years has also encouraged farmers to shift to Bt cotton. It has ensured better profit margins.

The surge in domestic cotton production is also fortuitous. It comes at a time when cotton prices have soared globally due to supply side bottlenecks - largely due to falling production in China, the largest producer and exporter of cotton. In the last one year alone, international cotton prices have trebled - from 80 cents (Rs 36) a pound to 230 cents (Rs 103). In kilogram, that translates to Rs 79 a kg and Rs 226 each.

According to a recent US Department of Agricultural report, "Declining area and weather-related problems reduced production in China to 30 million bales, a five-yearlow... China's ability to make up the supply short fall with imports is constrained by the availability of foreign exportable supplies," it says. The Chinese government's cotton reserves fell to a 15-year low in 2009/10.

Farmers, though, complain that volatility in domestic prices, which largely mirror global trends, has become endemic. This is a fallout of the government's decision to put a cap on cotton exports at 5.5 million bales - about 17 per cent of India's production - which often leaves farmers saddled with additional stocks. Hardeo Singh Jadeja, Vice Chairman of the Agricultural Products Marketing Committee, Rajkot Cotton Market Yard, explains: "In October 2010 the price was Rs 925 per 20 kg. Many farmers sold their produce then. Later, in February this year, the price shot up to Rs 1,400 per 20 kg and now it is hovering around Rs 1,100 to Rs 1,200 for good quality cotton." 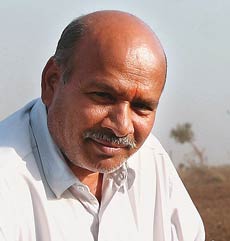 Jethabhai Manjibhai Patel, Farmer
Meanwhile, the seed industry is struggling to meet the vaulting seed demand of farmers. M. Ramasami, President of National Seed Association of India, or NSAI, says: "High labour costs and price control have hurt the industry." Since seed prices are also controlled, the NSAI is demanding an increase in cotton seed price in Andhra Pradesh, Gujarat and Maharashtra arguing that the correction would help the domestic seed industry engage 17 lakh farmers and farm labourers needed to produce good quality cotton seeds and encourage investments in research and development for new hybrid and seed technologies. The Gujarat government has raised seed prices by about 25 per cent. Maharashtra may follow suit.

The domestic textile industry is expect to treble in value to $100 billion (Rs 460,000 crore) by 2015 on the back of India's growing population, higher disposable incomes, rising retail and brand penetration. It is expected that cotton farmers need to produce at least 50 per cent more within the next decade. "Cotton fabric is the most accepted fabric. The demand for cotton will continue to grow," says Kishore Biyani, Group CEO, Future Group. This means farmers will need better seeds and improved farming practices to meet the increasing cotton demand. India needs to sustain its cotton revolution. This may be just the beginning.

Can Akula bring SKS back on track?