The international leg of the Business Today Pro-Am of Champions held in June was a fine mix of business and leisure. With its two 18-hole championship golf courses and a beach spread over two km on the east coast of Mauritius, protected by coral reef, the Constance Belle Mare Plage resort played the perfect host. 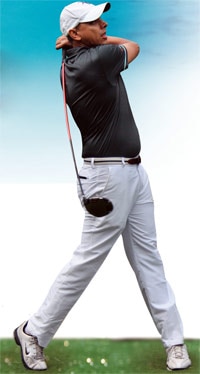 Rajesh Sanghi, Owner, Sah & Sanghi
From the moment the golfers arrived at the luxurious resort and had lunch at the scenic Deer Hunter restaurant in the clubhouse of the Legend Golf Course, there were continuous requests for a round of golf. A practice round was played at the Links Golf Course in the morning on June 23. The course was truly a golfer's delight, with beautiful undulating fairways and large manicured greens.

Strong winds and occasional showers made the course, a regular venue on the European Senior Tour, really demanding, and most participants ended up posting high numbers. Jhawar, winner in the 0-14 handicap category, bogeyed the fifth hole and double bogeyed at the sixth. A pint of local 'Phoenix' beer seemed to calm his nerves down and he made three birdies over the remaining holes for a score of 42 stableford points. (From left) Gert Puchtler, GM, Constance Belle Mare Plage; Ashish Bagga, CEO, India Today Group; Rahul Gaur, CMD, BRYS Group; Rohit Jhawar, Director, Usha Martin Ltd (winner in 0-14 category); and Derek Shanks, EVP, Commercial, Air Mauritius
Manish Aggarwal, who came out on top in the 15-24 group, had a somewhat similar experience. "No one in my four ball (team) could imagine that after scratching out the first two holes I would manage to win, and this was the biggest learning I had in the tournament."

At the gala dinner held at Deer Hunter, the guests, including the participants and their families, were welcomed with a performance of the local cultural folk dance Sega Mauricien. A live band played while the guests enjoyed their four course dinner. The Sega dancers later joined in, making for a really boisterous celebration. The winners, meanwhile, were awarded a trophy and a Victorinox Bag each. Constance Hotels and Resorts and Air Mauritius are to be commended for hosting and making the trip such a memorable experience for all the participants.
TweetYoutube
Tags: BT-Pro-AM championship | Bt-Golf event

The cloud could fill gaps in India's education sector