A bank of her own

It was a rare occasion in the Lok Sabha which had both United Progressive Alliance Chairperson Sonia Gandhi and Leader of the Opposition Sushma Swaraj smiling together in approval, while most of the other members burst into applause. Finance Minister P. Chidambaram, in his Budget speech, had just announced plans to set up a public sector bank exclusively for women . It was only later that many began to ask: does India really need such a bank?

The country already has many women's cooperative banks and selfhelp groups with considerable experience in handling credit issues related to women. Would the government have done better to make genderneutral public sector banks more financially inclusive? Is Chidambaram's move a mere ploy to woo women with general elections a year away? "I think a women's bank is a misnomer. There should be a women's only credit line," says Biocon Chairman and Managing Director Kiran Mazumdar-Shaw.

But the case for the defence is equally strong . Millions of women are still excluded from the banking process. According to a 2012 World Bank study, only 26 per cent of women in India have an account with a formal financial institution. A bank for women will also help empower them further, because it will lend only to women and will employ mostly women. "It is a good idea," says former Bank of Baroda Chairman and Managing Director M. D. Mallya. "It will encourage lending to various groups. The focus should be on the financial inclusion of women."

The government hopes to launch the bank in October with an initial capital of Rs 1,000 crore. But how effective the bank is will depend on the business model it adopts and how it innovates to best cater to women's needs. Many women do not control cash at home; nor do they have the collateral for loans. They rarely own land or immobile assets and tend to be disproportionately employed in the service sector where earnings are lower. Will the bank make an effort to include them? "You have to be smart on how you deliver it. The concept is good, but you need to build on it," says Mazumdar-Shaw, who was repeatedly refused a loan to start her business nearly three decades ago.

Some experts say existing schemes that have succeeded in empowering women financially, such as microcredit programmes, should first be strengthened. The government could also fine-tune schemes which encourage women to set up their own ventures. For example, the Micro, Small and Medium Enterprises Development Organisation conducts programmes for potential women entrepreneurs who do not have the necessary education.

Yet so far only 13.72 per cent of small enterprises are managed by women, according to the 2012 annual report of the Ministry of Small and Medium Enterprises. There is also the Trade Related Entrepreneurship Assistance and Development (TREAD) programme, under which the government grants 30 per cent of the total project to women seeking to set up business, through non governmental organisations. But how effective are they? "There is a lot of opaqueness around these schemes, nobody knows what to do, and that's a huge deterrent for us," says Sairee Chahal, Cofounder of Fleximoms, a company promoting flexible work solutions for women.

It is almost impossible for women to get a loan to set up a service or knowledge company, sectors where they are most likely to start their business in. Manufacturing finds credit much faster. "There is no doubt women are discriminated against in the loan giving process. They have to work harder to establish their credibility as entrepreneurs," says HSBC India country head and FICCI President Naina Lal Kidwai. 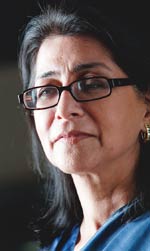 There is no doubt women are discriminated against in the loan giving process. They have to work harder to establish their credibility as entrepreneurs.. Naina Lal Kidwai
Despite the deterrents, some bankers are optimistic. They say the proposed bank will work if it creates new lending instruments or includes vocational training for women. India could take some tips from countries such as Bolivia and Indonesia where microcredit has evolved beyond group lending. Schemes such as Banco Sol in Bolivia and Bank Rakyat at Indonesia offer large individual loans to women and rely on repayment incentives.

Access Bank in Nigeria, DFCU in Uganda and Sero Lease and Finance in Tanzania have recognised that women are less likely to have established credit records than men and lower asset bases to draw for collateral.

They have partnered with the International Finance Corporation to develop new instruments to support women entrepreneurs. The new products include loans collateralised with equipment or based on cash flow, and training for the staff of financial institutions to sensitise them to women. "There is a definite need for different kind of banks in India," says Akeel Master, Head of Financial Services, KPMG. "There will be challenges in implementation, but if you are able to make it a success, it would be the first of its kind in the world."