Business confidence has plunged to its lowest level in six years on concerns of a likely fall in consumption and poor economic growth after demonetisation, finds the latest Business Today-C fore Business Confidence Survey. Experts are still divided on the likely impact of demonetisation on the Indian economy but business sentiment - as measured by the BT-C fore Business Confidence Index (BCI) - appears to have taken a body blow. The BCI, on a scale of 100, has slipped to 46.4 in the October-December quarter, the lowest level since its launch six years ago. The massive drop also reverses the trend of steady improvement in confidence levels last year. In the past two surveys, the confidence level stood at 53.1 (July-September) and 51.5 (April-June).

Business confidence had hit a high of 74.8 in the quarter ended March 2011, when the survey was launched. It dropped to a low of 48.2 in the July-September 2013 quarter, towards the end of the UPA-II tenure when sentiments had soured because of policy paralysis, scams, high inflation, weak rupee and poor economic growth.

The survey highlights that business leaders are less hopeful about economic growth and their respective businesses. More respondents expect situation to worsen on several fronts such as overall economic outlook, production level, order book, utilisation of production capacity, future investments, sales, hiring, and profits. For instance, 61 per cent respondents expect investments in business operations to drop in the January-March quarter over the previous quarter. The corresponding figure in the previous survey was just 25 per cent. 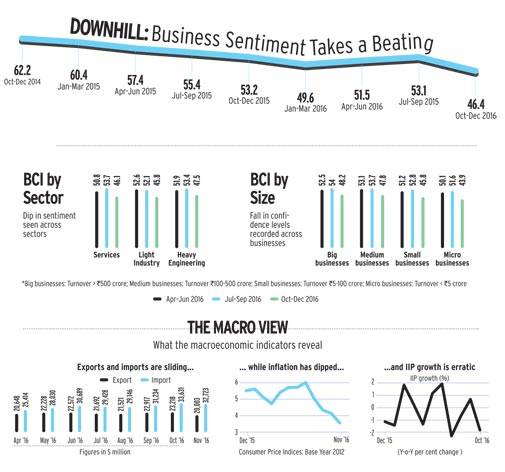 Sunil Duggal, CEO of homegrown FMCG major Dabur India, says that the company will continue to invest, but it will be more cautious because of the uncertainty in the business environment. "The impact of demonetisation is still not clear on economic growth and job market," he says. In the third quarter of 2016/17, net profits were under pressure, adds Duggal.

The survey shows that demonetisation was one of the key factors behind the sharp decline in sentiments. Some 77 per cent respondents believe that demonetisation will badly affect businesses over the next two quarters. Upasna Bhardwaj, Economist at Kotak Mahindra Bank, believes that the impact of cash crunch has been felt across sectors. She says that the impact is different for different sectors. For instance, cash-intensive sectors such as small and medium enterprises, textiles, gems and jewellery, will take time to recover. "The unemployment rates are set to increase in these sectors. Some of these businesses might not be able to revive at all. There could be spiral impact on other sectors too," she adds.

A majority of respondents in the survey - some 64 per cent - say that demonetisation will affect consumption and the economy in the long run. Most agencies have pared India's GDP growth forecast for the current financial year. For instance, the government's Central Statistics Office has predicted GDP growth at 7.1 per cent in 2016/17, against 7.6 per cent in the previous financial year, even without factoring in the impact of demonetisation. IMF too has lowered the economic growth estimate to 6.6 per cent in 2016/17, down from its earlier projection of 7.6 per cent.

The survey captures the mood of businesses of all sizes - big, medium, small and micro. Sentiments have dipped across these businesses and the trend is more pronounced in small and micro-size enterprises. A growing number of respondents expect overall demand to remain subdued in the current quarter. As a result, they have decided to keep production levels low. For example, 34 per cent respondents expect utilization of production capacity to be lower in the January-March period. In the last survey, 25 per cent were expecting production capacity to decline.

A vast number of respondents - 51 per cent - are hoping that the annual Budget would revive the flagging business sentiments. Kotak Mahindra Bank's Bhardwaj says that it will require both monetary and fiscal measures to change the mood of business leaders. She says that a 50 basis points (bps) cut in interest rates by the Reserve Bank of India is necessary along with more emphasis on productive spending in the Budget. "Infrastructure sector should be given a boost so that more construction jobs can be created. Social schemes have to be expanded, and some schemes that already exist - MGNREGA, affordable housing - should be given importance, " she says, adding that "the government could create room for growth in fiscal deficit rather than thinking about austerity."

U.R. Bhat, Managing Director at Dalton Capital Advisors, says that there are not more than two dozen promoters who can change business sentiments in the country. "All of them are stuck somewhere, be it mining or capital equipment industry. The Budget could revive sentiments if there's a cut in corporate tax rates and higher infrastructure spending," he says.

As a supplement to the BCI survey, we have carried out an assessment of other indicators of the economic growth. These include macro-economic conditions such as exports-imports data, Index of Industrial Production (IIP), and Consumer Price Inflation (CPI). The drop in sentiments coincided with reduction in IIP, and exports and imports.

With business leaders setting hopes on the Budget, the ball is now in the government's court. ~

Of Tagore, Tata, and Andrew Yule...