The grey clouds may not have disappeared, but optimism has risen for the third quarter in a row, finds the latest Business Today-C fore Business Confidence Survey.

The financial year that just ended was tumultuous for the economy, but business is now slowly taking a turn for the better. A government trying hard to revive the economy, moderating headline inflation, and softening interest rates have helped improve business sentiment for the third successive quarter.

The Business Today-C fore Business Confidence Survey for the January-to-March quarter of 2013 found that economic conditions are picking up thanks to higher demand. On a scale of 100, the confidence level is at 54.5 in the first quarter of 2013, up from 53.8 in the October-to-December period and 52.4 in the three months before that. Market research agency C fore quizzed 500 CEOs and chief financial officers across 12 cities for the survey. The outlook for the second quarter of 2013 also looks encouraging with more than a third of the respondents expecting better prospects.

Business Today started the survey in 2011. From a high of 74.8 in the quarter ended March 2011, business confidence fell steadily, picking up only in the first quarter of 2012, ahead of the Budget. But confidence levels plunged again in the April-to-June period of 2012 after Pranab Mukherjee, then finance minister and currently President, proposed tax rules that riled investors. The government went into damage control after P. Chidambaram took charge as finance minister in early August. 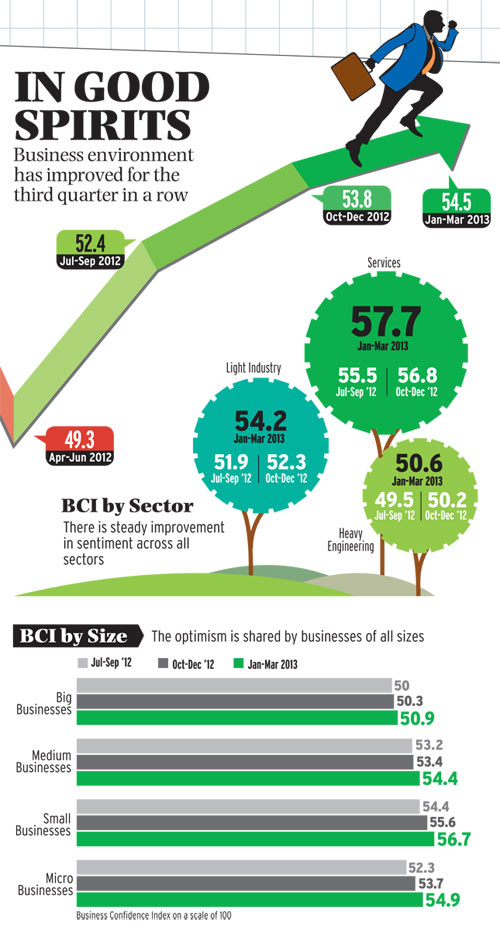 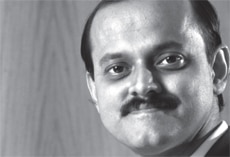 Economic reforms are no longer a matter of choice. They are essential: Samiran Chakraborty
During his visits before the Budget in February, Chidambaram promised to bring India back on the fiscal consolidation path. He delivered on the promise in the Budget, and also refrained from announcing any populist measures in the run-up to the general elections due by May 2014.

The survey shows that while 29 per cent expect their business prospects to worsen during the quarter through June compared with the previous three months, 39 per cent expect an improvement. Siddhartha Roy, economic adviser at the Tata Group, says recent government steps have revived sentiment. In the past two months, the Cabinet Committee on Investment has cleared projects worth Rs 74,000 crore which were stuck at various stages of approvals. This includes projects in the all important sectors of power, infrastructure, and oil and gas.

No doubt, slow economic growth remains a matter of concern for businesses. In early February, the Central Statistical Office projected gross domestic product growth for 2012/13 at five per cent, the lowest in a decade. The forecast was lower than the finance ministry's estimate of 5.7 per cent. Roy says the government needs to create the right environment for the next stage of growth.

"Either consumption or domestic investment has to go up," he says. "We tried to increase consumption through various social security schemes but these led to fiscal profligacy and inflation. The long-term solution is to increase investments."

Samiran Chakraborty, Regional Head of Research for South Asia at Standard Chartered Bank, agrees. "Economic reforms are no longer a matter of choice. They are essential," he says. Chakraborty expects the government to take more decisions at the executive level - rather than wait to go through the legislative route - in areas such as allowing foreign direct investment in some sectors, resolving power tariff issues, cutting fertiliser subsidy, and creating a regulator for the roads sector.

The March 19 rate cut by the Reserve Bank of India (RBI) has also enthused companies. Nearly a third of the respondents to the survey expect to benefit from the reduction in rates by a quarter-percentage point.

"The RBI's decision was aptly timed to revive industry's confidence," says Naina Lal Kidwai, Country Head of HSBC India and President of the Federation of Indian Chambers of Commerce and Industry.

Still, many feel the central bank needs to ease monetary policy further. "On large borrowings, the interest rate is still too high at 10 to 11 per cent," says Ravi Jaipuria, Chairman of Delhi-based diversified conglomerate RJ Corp. "Interest rates should be brought down further to encourage companies to invest." Kidwai says, however, that bank lending rates will fall only when deposit rates do.

The RBI is likely to cut interest rates by another 50 basis points by the middle of this year, Barclays Capital said in a March 26 note. That may not help much, though.

StanChart's Chakraborty says Indian companies are extremely overleveraged. "They will first try and restructure their balance sheets before borrowing fresh capital," he adds.

The survey shows also that about a third of the respondents feel demand conditions will get better. Jaipuria says shrinking profit margins are not a concern if demand stays healthy. "As long as the top line is growing, other things will fall into place. We registered double-digit growth in the past year," he adds. 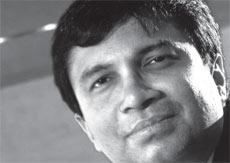 Political uncertainty and nearing elections are playing in the minds of business executives: Saugata Gupta
Not everyone is hopeful. In the absence of any major investment plans, hiring activity is expected to be muted. The survey shows that 51 per cent respondents expect no major change in recruitment trends in the current quarter. E. Balaji, Managing Director and CEO at human resource services firm Randstad India, says hiring in retail, telecommunications, power and infrastructure industries will take time to recover due to sector-specific problems.

Saugata Gupta, CEO of consumer products maker Marico, says economic growth and low food inflation are essential for demand to stay robust in the consumer goods sector. "While food inflation is okay, disposable incomes are not rising. This is leading to sluggishness in select product categories," he adds. Click here to Enlarge
Gupta does not expect the government to announce any big-bang reforms before the general elections. "Political uncertainty and nearing elections are playing on the minds of business executives," he adds. Kidwai agrees. "It is important not to lose sight of reforms given the fact that our economy is still grappling with a slowdown," she says.

"It is imperative to remain pragmatic and focus on the implementation of policies."