As the proportion of bad loans increases, and losses mount, many smaller banks will have to take a hard look at their lending activity. Are the balance sheets of India’s financial institutions strong enough to keep pace with the frenzied growth in credit, and the risk that comes along with it? Anand Adhikari finds out. No hoarding! that was us treasury Secretary Henry Paulson’s explicit diktat last fortnight to the dozen-odd giant financial institutions that are being rescued immediately by $250 billion or Rs 12,25,000 crore (under the mega $700 billion or Rs 34,30,000 crore bailout package). Away from Paulson’s office at Pennsylvania Avenue in Washington, there is an equally-frantic scramble for capital right from Switzerland to the UK to Iceland to Belgium. Back home, the crisis has been more of sentiment than liquidity. Yet, that doesn’t quite mean that Indian financial institutions— banks, mutual funds, insurance firms—are in clover. As the proportion of bad loans increases, and losses mount, courtesy of mark-to-market provisioning on investments, many smaller banks will have to take a hard look at their lending activity. 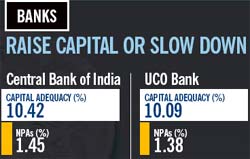 Click here to Enlarge
In the hitherto unflustered mutual funds industry, recent asset-liability mismatches have come as bolt from the blue; mutual funds have been operating on by far the lowest capital in the entire financial services sector. The eight-year-old private sector life insurance industry hasn’t had any rude shocks, and such companies have actually been insisting on functioning on a lower capital base by introducing a risk-based capital model. But in the current global environment, when under-capitalisation (and over-leveraging) has become the villain of the piece, is this really the way to go for life insurance firms?

Banks: Capital woes
Bangalore-headquartered Vijaya Bank plunged into a loss of Rs 76 crore in the first quarter of 2008-09. The bank quickly attributed the loss to mark-to-market provisioning on its investment portfolio. Alongside, non-performing assets (NPAs) swelled to 0.68 per cent from 0.49 per cent a year ago; and the capital adequacy ratio slipped to 10.47 per cent as against 11.21 per cent a year ago. The 77-year-old public sector bank (PSB) desperately needs capital to maintain its growth of 25 per cent in 2008-09. But there is little headroom for that, what with the government’s stake perched at 53 per cent; if it sinks below 51 per cent, Vijaya Bank will lose its PSB status.

Paresh Sukthankar
Enter the good Samaritan in the guise of Finance P. Chidambaram, who, last fortnight, a la Paulson, announced a plan to infuse capital into a few select banks. These include Vijaya Bank, along with the likes of Dena Bank, Andhra Bank and UCO Bank. But this may yet be just temporary relief. As Roopa Kudva, Managing Director & CEO at ratings major CRISIL, points out, the problems may be longer-term in nature. “The banking sector faces profitability pressures due to higher funding costs, mark-to-market requirements on investment portfolios, and asset-quality pressures due to a slowing economy.” Clearly, in these circumstances, inadequate capital translates into constrained growth.

Roopa Kudva
“The cost of capital has gone up from what it used to be earlier. Even if banks grow at the system rate of 20-25 per cent, there could be a capital challenge, at least for some players, to fund their business growth,” says Paresh Sukthankar, Executive Director, HDFC Bank. Interestingly, the three big private sector banks— ICICI Bank, HDFC Bank and Axis Bank—raised capital last year. In the current tight market conditions, however, it’s difficult to raise 10-15-year Tier II capital. The deposits of many of Indian banks are not growing in tandem with credit growth. For instance, Canara Bank’s deposits grew by 8.21 per cent, ICICI Bank’s by 6.03 per cent and J&K Bank’s by 13 per cent in 2007-08. That rate will slow down further this year. “The banks that grew faster than the rate of growth of their deposits will be in trouble as a part of their funds were sourced at market rate. There could be very strong mismatches in asset-liability as well as in funding and liquidity,” reasons a banker. By March 2009, Basel II norms require banks to provide for a wider range of risks than under the earlier norms that considered credit risks alone. There are also instances of banks increasingly resorting to higher risk that is not reflected in their balance sheets. There are growing offbalance sheet items like forex derivatives, lines of credit and guarantees, which pose a big liquidity risk to banks, although the Reserve Bank, last fortnight, did issue prudential guidelines for off-balance sheet items. But if profitability comes under severe pressure due to the credit slowdown, and NPAs increase alongside, capital will fast become a casualty.

Dhirendra Kumar
Capital or regulation: The MF Dilemma
Way back in 2001, Y.H. Malegam, a Chartered Accountant by profession who has been on many committees of the Securities & Exchange Board of India (SEBI), suggested that asset management companies (AMCs) should have a minimum capital of 2 per cent of assets under management (AUM). The then SEBI chairman D.R. Mehta welcomed the suggestion, but this controversial proposal was subsequently dumped as AMCs protested. Had Malegam’s suggestion been implemented, mutual fund major ICICI Prudential AMC would need to have a capital base of Rs 995 crore as against its existing capital of just Rs 17 crore.

Sujoy K. Das
The argument of the fund industry is that AMCs are not banks, by design and structure, and hence there is no need to maintain a huge capital base. Recent developments where the fund houses saw massive assetliability mismatches in fixed income schemes, thanks to their investments in long-term or illiquid securities, has brought into the open the subject of capital. In fact, many had to run to banks, non-banking finance companies and cash-rich corporates to meet redemption pressure before the Reserve Bank opened the loan tap against the buyback of certificate of deposits.

Kamesh Goyal
Says Dhirendra Kumar, CEO, Value Research: “Regulations should be such that if there is negligence there should be a penalty. They should be driven out of business.” Today, asset management has become an AUM-driven business with little focus on profitability. One possible scenario? If lines of credit or any other external source of succour didn’t exist, fund houses would have had no option but to sell assets at current market levels or delay payments till there is cash infusion in the fund from the maturity proceeds from investments. End-loser: the investor.

P. Nandagopal
Mutual fund honchos look at the scenario a bit differently. Says Sujoy K. Das, Head (Fixed Income), Bharti AXA Investment Managers: “It is not a case of assetliability mismatch but a case of getting exposed to the market risk.” Experts say there can be a capital provision for market as well as liquidity risk. “Regulations were framed when mutual funds didn’t have any money in their fixed income fund. Now you really need to revisit these regulations when debt funds have assets worth Rs 3 lakh crore,” says Kumar.

Recently, mutual funds were keen to offer capital guarantee products by way of equity-linked debentures. SEBI refused to give the go-ahead. The apprehension clearly was what would a guarantee by undercapitalised AMCs be worth during a market slump?

Viren Mehta
Life insurance:Case for Lower Capital
Last fortnight, the New Yorkheadquartered Fitch Ratings downgraded close to a dozen insurance and re-insurance giants because of the pressure on their balance sheets. The negative outlook reflects the significant falls in global credit and equity markets, and the unprecedented market volatility and uncertainty. 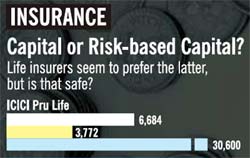 Click here to Enlarge
Back home, the eight-yearold private sector life insurance sector may not be as exposed to risk as their foreign counterparts. But it may be a different story tomorrow. The Insurance Regulatory & Development Authority is working on ways to introduce risk-based capital norms. The players argue that as unit-linked insurance plans (ULIPs)—which make up more than 80 per cent of their portfolio— shift the risk to unit holders, they require lesser capital vis a vis the traditional guaranteed products where risk is higher. “Risk-based capital is a good way as capital requirements could be lower for companies being run on a conservative basis; while companies that have an aggressive approach could see capital going up,” explains Kamesh Goyal, CEO, Bajaj Allianz Life Insurance.

There are those who argue that the capital-intensive nature of the life insurance business coupled with the number of assumptions that are made (like persistency rate, surrenders, claims, investment returns, liquidity and mortality) make it a risk-loaded industry. “I think expectations of a reduction in capital adequacy or solvency margins at this juncture are premature,” reasons Viren Mehta, Director, Ernst & Young. He adds that there may be a case for reducing solvency margins provided adequate safeguards are introduced. Points out P. Nandagopal, CEO, Reliance Life Insurance Company: “It’s a lesser known fact that under ULIPs, there are also products with guaranteed returns. In the current market situation, there may be a case for ULIP-based guaranteed returns. But we have been offering such products even earlier.” The worry clearly for the industry, however, is the pile-up of losses. The situation won’t improve any time soon, what with demand slowing down in the wake of rising inflation and falling markets. Capital reduction doesn’t appear the most pragmatic option in the midst of such sobering market conditions.

Hurdles on the growth highway