"Create the right environment for start-ups" 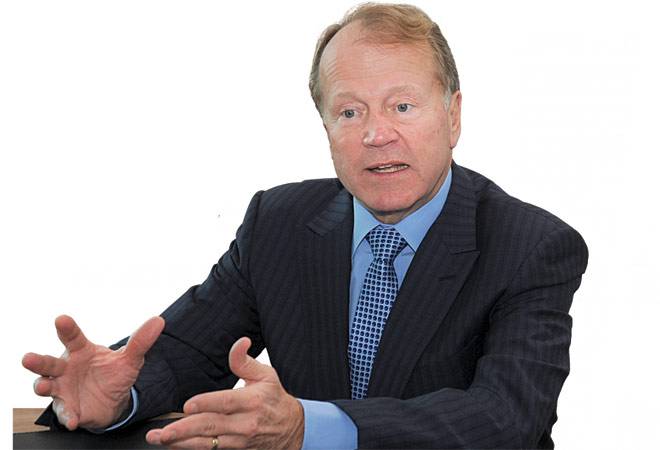 Under John T. Chambers, the CEO for 20 years till 2014/15, Cisco grew its revenues from $1.2 billion to $47 billion. After making the company the global leader in network hardware, Chambers last year moved into the role of executive chairman and advisor to the new CEO, Chuck Robbins. Chambers, who nowadays tours the world building relationships with governments and helping countries digitise, is excited about the NDA government's Digital India initiative that he says is "beginning to take off". In Visakhapatnam to inaugurate the first phase of the Andhra Pradesh government's project to provide broadband in all 13 districts, he talked to BT's E. Kumar Sharma about plans to help India digitise and the future of Cisco. Excerpts from the interview:

In spite of your considerable backing and optimism, Cisco's India operations contribute a little over 2 per cent to revenues. How do you see this?

We focus on company transitions. Our transitions moved from switches and data centres to mobility and security to business outcome in digital companies/countries. If we make that (last) transition more effectively than anybody else, we will grow more dramatically than peers. In most countries where we have major digital programmes, we have grown two times, even three times the normal growth rates. For instance, our France business grew in double digits last quarter. India grew over 20 per cent in the last two quarters.

Coming to your point, the largest democracy in the world has to account for a much larger share of our business. We have set a goal of 4 per cent revenues from here by 2020 and 10 per cent in the longer term. So, by 2020, the revenue from India will double from 2 per cent to 4 per cent of the total. That's not all. The real goal is to partner with India, with Start-up India, with governments, with cities, and with the ecosystem in India. That would be a win-win for the country, for the business, and for CSR (corporate social responsibility). If we do that, business growth will be much more (than projected).

What will drive this growth?

Digitisation, of every state, every company, and every household. Why are we so interested in Andhra Pradesh? It is largely due to the whole environment and not just a single metropolitan area. It is about bringing this capability to every citizen in the state and it starts with this digital highway (that Andhra is setting up to take broadband connectivity to all districts by the end of July).

But then, connectivity alone is not enough. What stops Cisco from taking ownership of the bundling of solutions as well?

Yes, the key to me is not connectivity. It is how can you help people participate. It is how do you re-skill the state for jobs of the future. It is about how you build smart applications. We will do it in combination with the ecosystem and with partners. This world is about creating multiple winners and we as a company are different from some of our peers. We always move with an ecosystem of local companies and partners. That way you are skilled better and create a win-win environment. It is also the right thing to do because we want to help a whole generation of start-ups. I am not talking hundreds but tens of thousands of start-ups in this country which we and others will be able to partner with in this ecosystem of digitisation.

In India, how are you working with start-ups? You had a $200-million venture fund that invested in a number of companies. Tell us about it and the portfolio of Indian companies in it.

I spend almost a third of my time with start-ups. In India, since 2005, Cisco has announced a cumulative allocation of $240 million for investing in early-stage and growth-stage companies. Cisco has invested in 25 companies in India so far. On March 18, it announced an additional allocation of $40 million, taking the total to $280 million. It will go up. Twenty five companies is not a big number if you look at the opportunities. India can become a start-up nation but for that you have to create the right environment for start-ups and re-skill your workforce. In Andhra Pradesh, you will see how dramatically we expand skill sets through network academies that are training people for areas where jobs are and in partnerships with universities around key areas (For instance, Cisco intends to set up the Internet of Everything Innovation Centre in Visakhapatnam. In addition, it is investing in an advanced Technology Center of Excellence and Research Lab at Institute of Digital Technology in Tirupati that will be focused on cyber security, smart city and manufacturing solutions. The centre will train graduate engineers in advanced digital technologies, among other things. Cisco also plans to sponsor a 12-month research programme at the Andhra University in Visakhapatnam to explore the possibility of developing and customising digital technologies and solutions for rural Andhra Pradesh).

You have been talking about 500 billion connected devices by 2030. Where are these numbers coming from?

We probably have been the best company in the world in anticipating the number of connectivities. For a business person, the power of a network is the number of devices connected or people connected squared. So, when you talk about where the power of the network is coming from, the numbers I talked about would probably be conservative as you move towards 500 billion devices. This will be up from the 14 billion devices today and from just 1,000 connected devices when Cisco stated in 1984.

What do you have to say about the argument that Cisco is a bit late to the hyper converged infrastructure play? For example, companies such as Nutanix or Simplivity probably have a headstart. How can Cisco catch up or take a lead?

We are not playing catch-up. Let's be very direct, and I can give you the numbers. We are No. 1 in terms of market share in 12 out of our 18 product families. We have moved in areas such as security, where we were transactional players, to the No. 1 position. You talk about convergence. We know how to do that well. Hewlett-Packard said it would be out of data centres but we said we will go there. They said "John you don't understand data centres, you are going to be out in a year". Well, we ate their lunch. We are also good at acquiring companies to accelerate our transition and to complement what we are doing. So, you will see us in areas you just alluded to through internal development, strategic partnerships and acquisitions. We do it better than anyone else in the world. By the way, how many companies you just mentioned will be around in 10 years? Look at some of our competitors 15 years ago. None of them exist today.

You are also the chairman of the US India Business Council (USIBC). In its representation to the USTR on Special 301, USIBC claims the Indian government has privately assured that it will not use compulsory licences for commercial purposes (we have seen this being applied in the pharmaceutical sector). Who has assured you? Tell us about this.

I am not going to talk about the specifics, but on issues that are very important to India, a part of my job is to represent that very effectively across all levels of governments in the US and India. If there are two countries whose goals should be aligned, it should be the US and India, and I believe it will happen. This is why I believe in your prime minister, this is why I believe in your enterprises here. There will always be a couple of bumps in terms of the areas of importance. We handle this very carefully at the US India Business Council. We did not take a position on intellectual property. We actually saw the government making progress on this. So, you will always have points where there will be a little bit of give and take but the end result is strategic for both countries and their businesses. What do you find most attractive about India?

The energy levels here are so exciting. What I love about India is the people. In Silicon Valley, there are 250,000 people from the Indian diaspora and probably 40 per cent of our engineering workforce in the Valley has Indian background. I love many things about India.

As a former CEO of Cisco and its current executive chairman, what do you have to say about the directional change under the current CEO?

One of the most exciting things about our new CEO is that he will take Cisco to the next level, which is to make it the No. 1 IT company in the world. I think it is in our grasp. Chuck was carefully selected over a period of over three years and is doing a great job. It is much like a family. Cisco is my family, and like you would want your younger brothers and sisters and kids to do better, I want Cisco to do better after I move on to the executive chairman position than it did when I left it (as CEO).

Firms across all sectors are increasingly tapping freelancers

"Oligopoly is on the rise in the AC business"