A cloudburst in the classroom

The cloud could fill the gaps in India's education sector, but costs and last-mile connectivity are constraints - for now.
Nandagopal Rajan | Print Edition: Aug 18, 2013

The average pupil-teacher ratio in various categories of schools covered in the All India Student Education Survey is a healthy 31. But the figure could go up to one teacher per 120 students and, in the worst cases, even 600, if you consider that most of them teach more than one subject. Even then, you have to overlook the fact that many of these teachers add to the numbers, but don't really add value to the education system.

The task is daunting - we need more than 350,000 engineering teachers alone to cater to some four million students in the field. That is where technology can be used to augment the system. The cloud could be the wonder pill for what ails Indian education, but its adoption is hampered by costs and poor last-mile connectivity. As All India Council for Technical Education (AICTE) chairman S.S. Mantha says: "There is a lot of experimentation, but no massive implementation." But only widespread implementation will start changing the academic landscape.

"The cloud brings a lot of advantages," says Aravind Sitaraman, president, Inclusive Growth at Cisco. "It lowers costs, provides a degree of scalability and keeps the complexity in a central location." His company has developed an integrated hardware-software cloud solution for education, called Cisco Education Enabled Development (CEED) 2700. Code-named Dwara, this all-in-one box promises to reduce the cost of implementing cloud solutions to a dollar per child per month.

"If you have a teacher in one location, and she is good at mathematics, this technology can be used to virtualise her to other locations," says Sitaraman.

The Karnataka government already uses Dwara in a handful of rural schools, and to train teachers in some districts. Private schools such as the Oakridge International chain and technical education institutions such as the Nettur Technical Training Foundation have also adopted this technology.

Some organisations implement cloud solutions with their existing bandwidth, and without extra hardware. Bangalore-based Aurus Network's CourseHub is one such low-bandwidth video capture, management and distribution platform targeted at educational institutes. Others, such as Gate Forum, use the cloud to help final-year engineering students in small cities like Agra to prepare for the annual Graduate Aptitude Test in Engineering. But the largest on-ground implementation is NIIT's Cloud Campus, now available in over 150 centres nationwide.

NIIT gives students access to its faculty as well as round-the-clock availability of labs, course content and collaborative platforms. So while hundreds of students enrol in small towns such as Bagdogra, West Bengal, and Haldwani, Uttarakhand, to learn from the best faculty, in big cities ambitious 20-year-olds such as Ridhima Kapoor may find that the Cloud Campus gives them time, for example, to do an evening course in commerce at Delhi University.

NIIT chief executive G. Raghavan says their cloud campus basically addresses the need for flexibility and learning on demand. "Flexibility will be in terms of when, what and how to learn," he says. "This will be different for each person, so we have to get an optimal mix of pedagogy to get learning effectiveness."

His colleague, NIIT Imperia Executive Vice-President Udai Singh, says that the cloud enables instructors to get valuable data about the level at which students are able to understand a point. "This data point is not possible in a physical world."

But how do you manage traffic when students from multiple centres are listening to a single teacher? Singh says more centres don't mean you get more questions than you would in a single classroom. "Once you have reached a critical mass of students, the questions depend on what is being taught," he says. "So just a finite number of questions emerge, and that is enough for the others to understand." He adds that the data quickly helps teachers pre-empt questions and emphasise what they teach. There is much debate on whether a virtual teacher can actually replace or fill in for hundreds of others. Singh says: "If you are looking at technology replacing teachers, we are missing the point. Tech is a force multiplier that can increase the scope and impact of a teacher."

However, Sameer Brahmachari, Director General of the Council of Scientific & Industrial Research (CSIR), says technology has blurred the lines that separate teacher and student. "My experience with open source drug discovery has shown that groups of students who are monitored are the weakest," he says.

One of the most successful experiments in this field has been conducted by Sugata Mitra, Professor of Educational Technology at the School of Education, Communication and Language Sciences at Newcastle University in the UK. His acclaimed "Hole in the Wall" experiments sought to find out whether children could learn to use computers on their own. The results were positive - startlingly so. However, Mitra said in an email interaction with Business Today that it would be wrong to believe any child who participates in a Self Organised Learning Environment (SOLE) session will finish school with flying colours, go on to university and make a big impact on the world. He said: "This is not realistic. Every child will respond in his or her own way, and achieve to the extent of their own potential. Some will go on to great things, while others will simply finish school, an achievement in itself in many parts of the world."

Mitra, who recently received the TED Prize for his work, says that SOLEs are not designed to be as effective as a really good teacher or facilitator in a great school, but they can make a real difference to children who do not have the resources and who would otherwise get left behind. "Unfortunately, there are always going to be places in the world where a good teacher cannot or will not go - SOLEs are designed to 'beam' them into these locations."

But the real essence of the cloud classroom is that it enables students to go back to the content whenever they want. "The problem with live video classes is that there is no pause, rewind and forward, so students might miss parts if connectivity is affected," says Sunit Singh Tuli, CEO of Datawind, the company that makes Aakash tablets. "That is why we are big believers in affordable individual devices. If students get access to devices 24/7, they can rewind, pause and forward. This is crucial, as not everyone can learn at the same pace, and this ability will have a huge impact on a lot of students."

In the Indian context, where connectivity is a problem in many regions, Tuli says the flip classroom model is useful, as it lets children study from content pre-loaded on a device and then interact with the teacher in a classroom. He says this is where access to quality content through massive open online courses, or MOOCs, can be effective. Such content is freely available online. "We should stop teaching people things that they can Google," he says. "The ability to analyse information is what we need to inculcate." 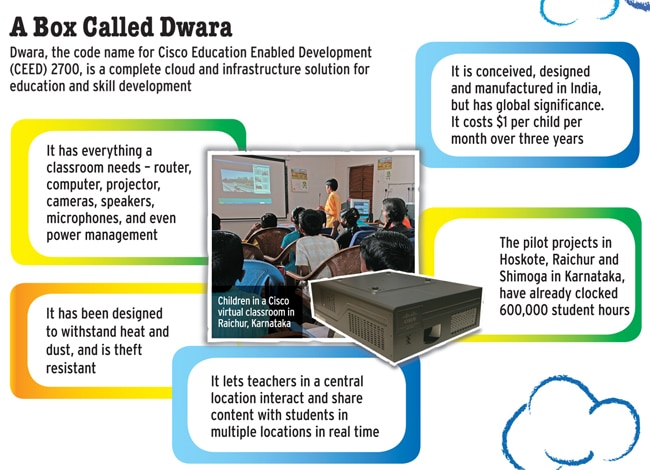 Despite the abundance of free content, there is still a bottleneck, especially in technical education. AICTE's Mantha says it is looking at hosting quality content through the National Programme on Technology Enhanced Learning. This collaboration between the Indian Institutes of Technology and the Indian Institute of Science provides free web and video courses in engineering, the sciences and the humanities. "This content can be hosted in the cloud and made interactive," says Mantha. "Interactivity is the key, as technology is based on concepts and algorithms. Hence the importance of blended education cannot be ignored. The major work still has to come from the teacher, who cannot be replaced."

Asheesh Raina, Principal Research Analyst at Gartner, says everything in and around the cloud will take a while to become mainstream. "The landscape will emerge only when there is equilibrium of demand and supply." Mantha adds that it is important for any cloud solution to be able to become sustainable after a point, and this includes content and the last mile.

The adoption of the cloud in schools is expected to pick up once last-mile connectivity is ironed out. This could happen after the high-speed pan-India National Knowledge Network starts reaching the villages that most require such assisted education. "Roads don't reach all villages, but we can take fibre optics everywhere," says CSIR's Brahmachari. "In this new world, we should be able to put content on the cloud and take it to all these locations."
Tags: Cloud | India education | Education in India | NIIT