Perhaps a more apt name for the Multi Commodity Exchange of India (MCX), based on its record so far, would be 'Precious Commodities Index'. Though it deals in many metals, both precious and base, a number of agricultural products as well as energy related products like oil, most of its traded value comes from just two precious metals - gold and silver. The dependence has increased over the years: the two metals accounted for 49 per cent of the MCX's turnover in 2007 which rose to 63.7 per cent by 2011.

Overall, MCX - financial whiz Jignesh Shah's crowning achievement - which got regulatory approval from the Securities and Exchange Board of India in September 2003, has been a great success. Its market share has risen steadily, touching 86 per cent in 2011/12. Its nearest rival, the National Commodity and Derivatives Exchange, has barely 10 per cent. MCX accounts for 98.5 per cent of the silver trade in the country and 97.1 per cent of the gold trade, making it also the biggest gold and silver exchange in the world. Its initial public offering, in late-February this year, was oversubscribed 54 times, and raised Rs 663 crore from the sale of 6.43 million shares.

What explains its success? MCX's efforts to provide more flexibility to its trading members, by adopting improved technology and focusing constantly on innovation, is a key factor. "MCX's flexibility and its willingness to handhold members in the early years when it began made all the difference," says Krishna Kumar Nathani, Managing Director and CEO of Chennai-based IndiaBullion.com, a web-based bullion and foreign exchange advisory service. 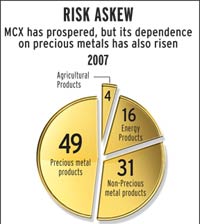 Click here to Enlarge
In those days traders at other exchanges were often unable to grab money making opportunities because of a shortfall in the margin money held by their brokers. MCX showed that an exchange's response time could be much shorter: one phone call from the trader, once the additional margin money had been remitted, and in five minutes the trader concerned was able to take fresh trade positions. "MCX's competitors took two to four hours for the same," says Nathani.

Another key differentiator was the performance of Sameer Patil, one of the vice presidents at MCX, whom Shah put in charge of building the bullion business. Patil moved aggressively to rope in members of the Bombay Bullion Association, as well as leading jewellers.

"The opportunity was open to all players," Naveen Mathur, Associate Director, Angel Broking. But only MCX utilised it effectively. MCX also worked hard to rope in jobbers - the day-traders who buy and sell in quick succession to generate profit - in the equity and equity derivatives segments.

Will the good times last? The excessive dependence on gold and silver, which sparked its success, could ironically work against MCX in coming years, feel some experts. "High volumes from bullion are fine, but there should be more hedging and open interest," says Ramesh Abhishek, Chairman of the Forward Markets Commission, the regulatory authority for the commodity futures market.

A third significant contributor to MCX's turnover - though much less than the two others - is energy, amounting to 17.6 per cent in 2011. As CRISIL Research noted in its grading report before the MCX IPO opened, the prices of both metals and energy commodities are benchmarked to international prices. "Not only do these commodities have higher volumes but they also have higher turnover, which generates higher transaction fees compared to agricultural commodities," it said. Financial services firm CLSA, in a late-February research note, had maintained that since MCX's income is mainly transaction driven, its earnings will remain highly sensitive to fluctuations in the volatile international commodities market. "There is likely to be a 20 per cent correction in international prices of both precious and base metals over the next eight to 12 months," says Kishore Narne, Head of Currency and Commodity Research at Anand Rathi Securities. "This will bring down the value traded on MCX by 20 per cent or even more." Click here to Enlarge
The change in customs duty structure on imported gold and silver in January this year could also impact the import of these commodities, and in turn affect MCX's income. While formerly customs duty was related to weight - Rs 300 per 10 grams of gold and Rs  1,500 per kilo of silver - it has now been linked to value. It is now two per cent of the value of gold brought in and six per cent of the value of the silver. Similarly, the prevailing global economic situation has already taken its toll on the prices of commodities, which have been falling.

The dominance of speculators also raises questions about how stable MCX's revenue stream is. Hedging transactions at MCX account for just around 40 per cent of total volumes - the rest is all speculative trade. Founder Shah, however, dismisses all such fears. "Around 60:40 or even 65:35 is the norm as far as the proportion of speculators to hedgers goes," he said at a press conference on July 11 in Mumbai. "But even that is not sacrosanct. Least impact cost is a key for hedgers and then there is utility of the product."

The prospect of the government imposing a 'commodity transaction tax', similar to the securities transaction tax (STT) has sparked worry too. "Our experience with equity markets suggest that imposition of STT resulted in more than 20 per cent decline in cash volumes," Soumitra Chatterjee, Technology Analyst at Mumbaibased Espirito Santo Securities wrote in a mid-February research note. Many traders in securities moved to commodities once STT came into force. The converse could happen, to MCX's detriment, if the proposed tax comes into force.

Generating a stable revenue stream and sustaining volumes are likely to be major challenges for MCX in coming years.

An entrepreneur who makes paper from elephant dung