When Vistara airlines decided to add new aircraft to its fleet recently, it took to social media to hire talent. In a span of 10 days, the airline hired around 40 cabin crew members through job postings on Facebook and LinkedIn. In fact, Vistara posts job openings on its Facebook page regularly and receives voluntary applications, too. "All our hiring is done either through employee referrals or social media channels. We don't advertise in newspapers or go through job consultants," says S. Varadarajan, CHRO of Vistara.

Advertising agency SapientNitro launched a campaign called 'Troublemakers' in April to look for extraordinary minds adept at digital innovation. The campaign, comprising short quirky videos and a quiz, was plastered across social media channels. The videos, which humorously depicted the kind of office characters the company was not looking for, recorded almost 506,405 views in total. Out of the 8,777 candidates who took the quiz, the company hired four. Kameshwari Rao, VP, People Strategy, Sapient India, says the company saw the number of applicants double this year, thanks to the campaign.

"Social media channels have become watering holes where all the influential, digital savvy people congregate," says Krishna Gopal, Global Head, Leadership Hiring and Talent Management at Tech Mahindra. Gone are the days of sifting through heaps of CVs to find the right talent. A direct message to potential hires on Twitter or LinkedIn saves time and effort.

The wide reach of social media is also helpful to contact people in countries where full-fledged commercial job portals are absent, informs Karuna Vempala, Director - Talent Acquisition Group, Cigniti Technologies, which has got over 200 professionals on board in the past three years through social media channels.

Hiring through social media facilitates a direct connection between the company and the candidate. And the absence of a recruitment consultant makes it a cost-efficient process. Companies are resorting to social media to hire people with special skill sets. "It is extremely powerful when you want to narrow down your search to a very specific criterion like the college they went to or the professional groups they are a part of," says Gopal.

A quick personality check by browsing through candidates' Twitter, Quora, Instagram and Facebook profiles helps companies take more informed decisions. "It helps in ascertaining a person's political inclination, values and ethics, which are very important especially for leadership roles as it would affect the culture of the company," says Purushotam Savlani, SVP and MD of background screening firm First Advantage.

When hiring for low-level jobs, social media helps in corroborating candidates' claimed accomplishments - through testimonials and endorsements on LinkedIn, for example - and also give an idea of how their bosses or colleagues perceive them. Vistara's Varadarajan recounts an incident: "We had shortlisted a person on LinkedIn. But on checking his Facebook posts, we found that he had an aggressive personality, and very radical views on politics". He wasn't hired.

It's the human word over the digital word for Shailja Dutt, Founder of Stellar Search, an executive search company. She is against "making judgement calls based on partial information of someone's social life online". "One can't use that data to take an informed decision on whether the person would make a good fit to the organisation. If there's a number to call for a reference check, make that call," Dutt advises. 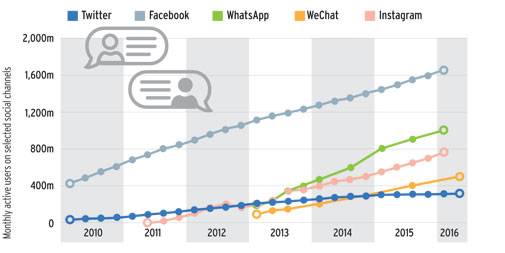 LinkedIn's new feature 'Open Candidates' comes as a relief to job seekers who want to look for other options without alerting their current employers. Using the feature available on LinkedIn's Recruiter product, users can secretly convey their interest to switch to recruiters. The information would be kept away from the candidate's employer, making the process a lot less stressful. "We currently have nearly a million members signalling they're open and expect that number to grow significantly as we expand markets through 2016 and beyond," Eduardo Vivas, head of product for LinkedIn's Talent Solutions, said in a blog post. The feature, for now, is available in the US, Canada, Australia and the UK. The professional networking site has also introduced two other features - LinkedIn Career Pages and Apply Starters.

After Instagram, Facebook is trying to copy Snapchat's most popular feature 'Stories' on its Messenger app. US-based technology website TechCrunch reported that the social networking giant has launched 'Messenger Day' in Poland. The feature enables users to share stories - videos and pictures in a slideshow - which disappear after 24 hours, just like they do on Snapchat. The feature has only been launched in Poland, where Facebook Messenger is not as popular as Snapchat. "We know that people come to Messenger to share everyday moments with friends and family. In Poland, we are running a small test of new ways for people to share those updates visually. We have nothing more to announce at this time," a Facebook spokesperson told the tech website. Earlier in August, Facebookowned Instagram had introduced a similar feature.

The Politics of Black Money