Lots of people celebrate their birthday with an exotic meal. But what made MakeMyTrip.com founder and CEO Deep Kalra's meal - Thai chicken and salad - extra special was that it was cooked by his 10-year old son Armaan, a MasterChef Australia fan.

"Both my kids watch the show all the time," says the July-born Kalra. "If they have to travel or study, they record it to watch later."

Young Armaan has plenty of company. Food-related TV programmes have spawned a cooking cult in India, and many devotees are children. The third season of MasterChef Australia, which ended in November 2011, earned host channel Star World a 74 per cent market share in the General Entertainment Channels category.

What with these shows and Zee Khana Khazana, several shows on Discovery Travel & Living, and the Food Food channel, Indian audiences' cup runneth over. Party conversations are peppered with names such as Nigella Lawson, Donna Hay and Gordon Ramsay.

What yeast does for dough, cooking shows are doing for middle-class Indians' awareness about exotic food. Mumbai food consultant and writer Rushina Munshaw Ghildiyal, a selfconfessed MasterChef Australia addict, says: "When I was a kid, hot-and-sour soup was the most foreign food I knew. My kids today are aware of all kinds of complicated ingredients and foods."

Rising awareness is spurring culinary adventures. Far from being armchair chefs, many viewers are invading that former fiefdom of the matriarch and the maharaj - the kitchen. The more avid among them are seeking out workshops and classes to beef up their cooking skills.

Given rising demand, many who have culinary chops are venturing into teaching. Cooking classes are thriving, thanks to the enthusiasm stirred up by TV chefs.

Among the teachers is Kishi Arora, a Delhi pastry chef and consultant for Godrej's Nature's Basket gourmet grocery stores. Among her recent workshops was one in Gurgaon, near Delhi, that focused on different types of cheese.

In Mumbai, Ghildiyal, influenced heavily by her own addiction to cooking shows, is setting up what she calls India's first cooking studio, which is essentially a high-end cooking classroom. Here, she says, every student will have his or her own cooking station, just like on MasterChef Australia. She says it will be like a "fantasy kitchen", with a well stocked pantry, and bells and whistles. Fees will range from Rs 1,500 for two hours to Rs 7,000 for an entire day. Course themes will include healthy cooking, classes for kids, and special diets.

Growing awareness has made life a little easier for gourmet chefs.

"Four years back, when I started this business, no one knew about Bavarian filling, yuzu or Japanese lemon, French lavender, Valrhona chocolate and financier, a type of French cake," says patissier Arora, who delivers desserts in and around Delhi. She takes orders through her website, www. foodaholics.in, or on the phone. She saves a few minutes on every phone order, as she spends less time explaining ingredients and types of cakes to customers.

The cooking craze has spawned whole new careers. Five years ago, Aditya Bal was planning a film career. Now he is a celebrity chef, with his own shows on the NDTV Good Times channel - Chakh Le India and Chakh Le Academy. A self-taught cook, he says: "I worked part-time in restaurants in Goa and Mumbai for a good three years before I got where I am today."

Bal says he is still learning. For half the year he works as a chef in Goa and Mumbai, where he is on his feet for a good 12 hours a day, sometimes whipping up as many as 300 plates in three hours. The rest of the year, he works as a TV chef, which sometimes takes up 18 hours of his day. As if all this is not enough, he now wants to start his own cooking class.

Sanjiv Sakhuja's career was inspired by one of India's earliest cooking shows. A decade ago, his father Shiv Chander, who owned a paint factory in Mumbai, spent his retirement years watching Sanjeev Kapoor's Khana Khazana regularly, pen and notebook in hand. He would write down nearly every recipe from the show. 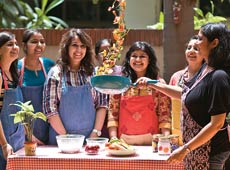 Skillet skills: Gurgaon teacher Rupali Kalra (far right) says class size has nearly doubled to 20 in two years
"We would sit and watch the show with him, and he would tell us this was the greatest asset he was leaving for us," says Sakhuja. The senior Sakhuja's file of notes - complete with an index for different kinds of foods, show timings and air dates - passed on to his children when he died. Today, Sakhuja owns four restaurants in Adelaide, Australia. Every weekend, his restaurants cook something from his father's recipe trove. Sakhuja's sister helps him run the restaurants, and both her children, in their twenties, study at Le Cordon Bleu, the famed network of culinary institutions.

Chef Sanjeev Kapoor pioneered the desi cooking show with Khana Khazana on Zee TV, which aired between 1993 and 2011. He launched the 24-hour Food Food channel in 2011. Malaysia's Astro All Asia Networks PLC now owns 50.1 per cent, and the Mogae Group owns 10 per cent. Sanjeev Kapoor owns the rest.

"The potential of this medium is phenomenal," says Kapoor. "Successfully making a dish motivates people to cook more." According to the channel, the average weekly viewership of its most popular show, Sanjeev Kapoor's Kitchen, is 3.5 million.

Viewership ratings are only one measure of Food Food's success. Kapoor and other show hosts on the channel conduct 20 cooking events every month around the country. Kapoor charges up to Rs 4 lakh for a three-hour appearance. The channel pitches some 120 brands of kitchenware, food and drinks. He says there is also demand for products used on the show.

"People aspire to have better kitchens," he says. "At the cooking events, people ask where they can buy the tandoor, mixer and knives I use on the show."

Demand for products has fuelled Kapoor's other venture, Wonderchef, a two-year-old company that sells cookware. Its products are sold via stores, around 50 websites and shopping channels. Kapoor says that in a 90-minute show, products worth Rs 10 lakh are sold. Wonderchef sales were Rs 35 crore in 2011/12.