The CDR system seems to be failing as many corporates are going down despite huge debt restructuring packages, thereby exposing the lending banks to huge risks. It was on February 24, 2013, that Life of Pi won an Oscar award for best visual effects (VFX). A few days before that, on February 11, the VFX company based in Los Angeles that did the visual effects, Rhythm and Hues, had filed for Chapter 11 bankruptcy. On March 29, 2013, Los Angeles-based Prana Studios won the bankruptcy auction of the reputable firm that had made X-Men, The Golden Compass and Incredible Hunk.

> Delay on the part of consortium banks to release funds

In the US, when a company fails to service its debt or pay back its creditors, it can approach a federal bankruptcy court for protection either under Chapter 11 or 7 of the US Bankruptcy Code. While under Chapter 11 a debtor remains in control of the business and has to restructure it under the watchful eyes of the court, under Chapter 7, the business is shut, assets sold and the proceeds handed over to creditor(s). In 2013, 11,07,699 petitions were filed by individual businesses in the US courts under Chapter 11.

A remarkable aspect of the US bankruptcy law is the speed at which Chapter 11 or 7 proceedings reach its logical conclusion. India too has its own process that comprises debt restructuring as the first step. If it fails, this is followed by recovery through Debt Recovery Tribunals (DRTs) as envisaged in the Securitisation and Reconstruction of Financial Assets and Enforcement of Security Interest (SARFESI) Act 2002.

In fact, entrepreneurs and shareholders are more protected in India than the US. However, Indian promoters are emotionally attached to their businesses and so are reluctant to give away control. Many promoters in distress approach Corporate Debt Restructuring (CDR) cell for easy credit. The CDR mechanism was created in early 2000 to help distressed corporates with a loan exposure of over Rs 10 crore. If a CDR fails, the asset is classified as an NPA.

There are instances where the banks have rejected CDR proposals. In 2013/14, the CDR cell set aside 111 cases together worth Rs 57,540 crore. "The proposal must qualify certain financial criteria and the Techno-Economic Viability (TEV) report must show possibility of revival," says Bijan Mohanty, a Non-Performing Asset (NPA) consultant and an ex-banker.

The banks, too dither in declaring a stressed asset as an NPA and are known to restructure debt liberally. The firms in the red approach the CDR Cell for a suspension on interest payment and also an extension in repayment period. "Both the lender and the borrower try to avoid being classified as an NPA. The idea is to buy time so that some divine intervention sets things right," says Mohanty.

RBI Governor Raghuram Rajan had warned banks against artificial fixes to avoid NPAs. "This is a wrong way to resolve a problem. Postponing recognition won't help. It is not paying today and it won't pay tomorrow," Rajan had said. His reservation is well-founded. As on March 31, 2014, the assets under debt restructuring have touched 5.2 per cent of the total advances made by the banks and is pegged at Rs 3,67,760 crore. This is much above the NPA level of 3.9 per cent or Rs 2,68,320 crore.

Now there is another danger looming large over the banks. According to Ramraj Pai, ratings head of Crisil Ltd, ideally the failure of CDR cases is 12 to 15 per cent. "But this percentage is now expected to touch 30 per cent," he says. Also the size of restructured assets is burgeoning. "The average size was Rs 50 crore to Rs 100 crore in 2008/09. Now it is Rs 1,000 crore," says Pai. This implies that many banks will face huge exposure if debt restructuring cases fail. A case in point is that of GTL Group, a telecom infrastructure provider, which is reeling under losses despite banks restructuring its 10,500-crore debt some two and a half years ago. But the GTL spokesperson says that the group companies are not struggling to pay its debt. "In fact, the companies have made payments of over Rs 3,500 crore to its lenders in the last 30 months," the company says. It attributes the net loss to the fact that the group operates in capital-intensive industries like telecom tower and power distribution. "This results in high non-cash expenditure," says the spokesperson.

The other tottering CDR cases include Mumbai-based Bharati Shipyard Ltd, Hotel Leela Venture Ltd, 3i Infotech, K S Oils Ltd, Varun Industries Ltd, Murli Industries Ltd, Surya Pharma and so on. Pai says that as the initial moratorium of 12 months to 18 months is getting over, a lot of assets are now coming up for payment. A 90-day delay in interest payment will automatically shift these assets from the restructured category to NPAs.

Most firms in the red blame it on slowing economy. But the argument does not hold good as many corporates like the Hindustan Construction Company (HCC) are on revival path. The firm was brought under CDR in early 2012. In 2013/14, it made a profit of Rs 80 crore and the consolidated loss is down from Rs 590 crore in March 2012 to Rs 386 crore in March 2014. Other firms that are turning pink in health through the CDR route include Essar Oil, Wockhardt and India Cements. 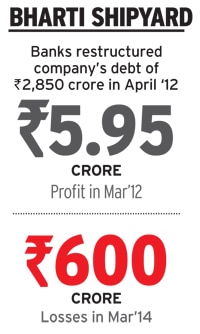 So why do some CDRs fail to kick in? No doubt that the banks have been quite liberal in bailing out companies. For instance, the market regulator SEBI in December 2010 had barred the promoters of Nagpur-based Murli Industries Ltd from trading shares. They were found hand in glove with broker Sanjay Dangi in market manipulation. Three months later banks approved a CDR package for the company. But the promoters failed to bring the promised money into the company.

In September 2013, they pulled out of CDR and approached the Board for Industrial and Financial Reconstruction (BIFR) by declaring the firm as sick. Under the BIFR Act, the company is restrained from disposing off any assets. This puts the lenders in a fix as they cannot start the recovery process. A similar case was that of Paramount Communication Ltd. In 2010, the company got a CDR package but failed to turn it around. Three years on it approached the BIFR.

"Trust and integrity deficit is a factor even though no state-owned banker would go on record," says ex-banker Mohanty. Though most of the stressed cases are with state-owned banks, a CEO of such a bank said, "It is but natural for the state-owned banks to have a higher share because we control two-third of the banking in terms of advances and deposits."

Brijesh Mehra, Managing Director, Royal Bank of Scotland (RBS) India, says the public sector banks tend to be more lenient in asset restructuring because the legacy of such banks have been development. "And so very often Indian promoters got their assets restructured without putting incremental equity of their own. This is what the regulators are looking to change," he says. Many also point to the loosely constructed CDR conditions based on promoters' promises as one of the reasons for the CDR failures. For instance, any demerger of a business takes at least a year. Market experts say the conditions like bringing in a private equity player, sale of land or business demerger should be time-bound or should be done before clearing the CDR. In 2013/14, the CDR cell reported over 120 cases of failure with debt close to Rs 30,000 crore.

Monitoring of CDR cases is another big issue. The banks don't have enough resources to oversee the large number of restructuring cases. "In a multi-bank scenario, an external or neutral monitory agency to oversee CDR cases is an option," says Mehra.

CDR failures have put a question mark on the restructuring process. It erodes asset value and affects bank's profitability. For instance, Rs 7,000 crore of banks have gone down the drain in restructuring Kingfisher Airlines. "If promoters continue to get patronage, the system will remain chocked," say Pai of Crisil Ltd.

So is there a way out? The RBI has been tightening the CDR regulations to bring it on a par with global practices. Come April 2015 and a newly-restructured account with will be treated as an NPA and provisioning on the account has been raised to 5 per cent. The banks too leave much to be desired of them. "Banks should look for early warning signs in a company before the account becomes a problem," says Pai.

The corporate sector also should not over-leverage. "The economic situation should improve as banks don't have the wherewithal to manage the growing number of stressed assets in the system," says A Krishna Kumar, Managing Director of State Bank of India.

Experts share tips on how Jaitley can fix the economy