Lost in the Outback

Cracking the rural market has turned out to be a tough task for organised retail chains.
Ajay Modi | Print Edition: Aug 4, 2013

Ajay S. Shriram has given up. After a decade of trying to establish a chain of Hariyali Bazaar retail stores in rural areas, the chairman and senior managing director of DCM Shriram Consolidated Ltd (DSCL) has exited the business. "It was a wise decision," he says. "Organised retail in rural India is a difficult proposition."

DSCL launched Hariyali stores in 2002. The stores sold farm products, groceries and household goods. By 2008 it had become the biggest rural retail chain in India with about 300 stores. Revenue from the business grew at a rapid clip and crossed Rs 850 crore in 2011/12. But it never made a profit. With each passing year it sank deeper into the red - the net loss touched Rs 106 crore in 2011/12.

Widening losses prompted DSCL to rethink its rural strategy. Initially, it decided to go slow on expansion. When that didn't work, it shut down some stores. Eventually, it made a total exit last fiscal year. Now, it sells only fuel products sourced from Bharat Petroleum at 37 locations in the countryside. Predictably, revenue dropped to Rs 515 crore in 2012/13. The upside is that the net loss from the business shrank to Rs 35 crore. The company hopes to make a profit from the venture in the current fiscal year.

DSCL joins sugar producer Triveni Engineering in exiting the rural retail business. Triveni had 42 Khushali Bazaar outlets in Uttar Pradesh and Uttarakhand when it shut shop in 2010 after running the unprofitable business for five years. The reasons are the same - higher overhead costs, fluctuating demand that depends on the monsoon, diverse buying habits, and difficulty in competing with mom-and-pop stores. "A small kirana (neighbourhood grocery) store is highly competitive. 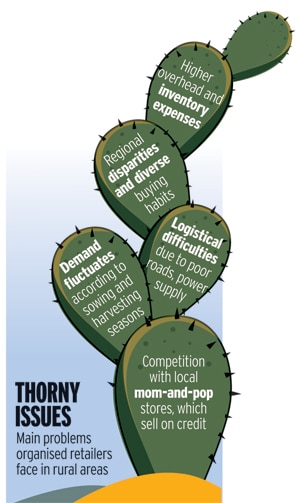 The owner knows local people and has a relationship with them," says Shriram. He adds that inventory costs are high in rural areas and managing logistics is tough because of poor infrastructure. A visit to a closed Hariyali store in Haryana gives a clearer picture. The store in Ladwa village is about 30 km from Karnal and is flanked by farms. An attendant at a DSCL-run fuel station adjacent to the store says the outlet didn't offer any discounts and, unlike local grocery stores, didn't sell on credit.

Other rural retail chains such as ITC's Choupal Saagar and Godrej-Future Group joint venture Aadhaar also have faced a tough time. This despite rural incomes and consumption rising steadily in the past few years. Farm incomes have been climbing because of higher support prices of wheat, paddy, sugarcane and other crops. Average wages under the National Rural Employment Guarantee Programme have risen to Rs 128 in 2012/13 from Rs 65 in 2006/07. The average monthly per capita spending in rural areas has jumped 36 per cent to Rs 1,430 in 2011/12 from Rs 1,053 in 2009/10, according to the latest data from the National Sample Survey Organisation.

S. Sivakumar, CEO of ITC's farm business, explains why organised retailers haven't benefited much from higher rural incomes and spending. "The income increases related to commodity prices and rural employment programmes are not necessarily happening within the micro-catchment area of a retail store," he says. R.S. Rekhi, CEO of Aadhaar, agrees. He says it "does not make economic sense" for large format retail to enter this segment because the rural population is scattered over a wide area.

ITC, the country's biggest cigarette maker, opened its first Choupal Saagar rural hypermarket in 2004. The stores provide a range of products and services. By 2007 it had 24 such outlets. It hasn't expanded since then, though it had plans to set up 100 outlets. Sivakumar says any expansion will depend on reforms in agriculture. He says 21 outlets are profitable and the remaining three will likely turn the corner this year.

Sivakumar says organised retail typically does not help increase rural incomes but only meets consumption requirements. This makes the business unsustainable. ITC, however, first developed linkages through its eChoupal initiative to buy agricultural products from farmers and improve productivity, helping raise their incomes. It then launched Choupal Saagar stores to sell a variety of products and services including farm inputs, consumer goods and consumer durables, apparel and fuel. Sivakumar says both momand-pop stores and organised retailers are in a unique position to meet the requirements of rural customers.

Aadhaar has learnt from its mistakes and those of its rivals. Initially, when Godrej Agrovet launched the chain, the stores were owned and operated by the company. After retail tycoon Kishore Biyani's Future Group bought a majority stake in the venture in 2008, it closed some company-owned outlets and expanded through franchisees. In early 2012, it entered the cash-and-carry business to sell to wholesalers and Aadhaar outlets. The business now accounts for half the rural retail sales. Aadhaar has 45 outlets in Punjab and Gujarat, two of the country's most prosperous states with relatively good transport and infrastructure. One such store is located in Dauraha village, 30 km from Ludhiana in Punjab. The 3,000 sq ft companyowned store looks like a regular midsize outlet in a city. The store manager says every product is sold at a discount ranging from two to 10 per cent. On average, 300 people visit the store every day and buy products worth Rs 400-500 each. 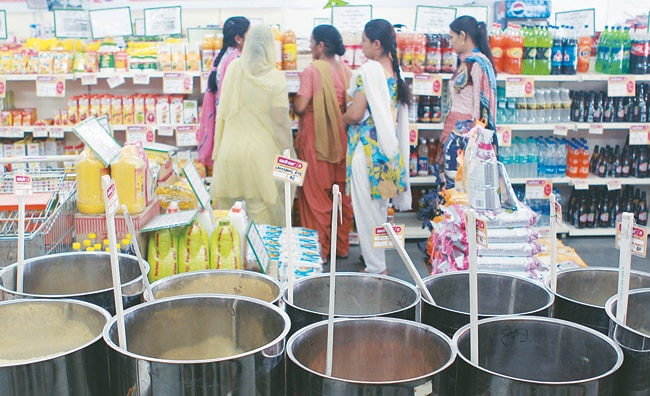 Villagers shop at an Aadhaar store in Punjab. Aadhaar hopes to break even at the operating level in 2013/14
Rekhi says Aadhaar will expand mostly through franchisees. Local franchisees are more capable of maintaining customer relationships as they understand the consumption pattern better, he says. Aadhaar has also scaled down the share of farm inputs in overall sales. Five years ago, a third of sales came from farm inputs while the remaining was equally divided between apparel, consumer durables and consumer goods. Now, more than 90 per cent of sales come from groceries and consumer goods. Rekhi says spending on food and groceries is stable throughout the year. Purchases of farm inputs and apparel are seasonal and coincide with sowing and harvesting. The new strategies have yielded results, and Aadhaar is looking to break even at the operating level by the end of this fiscal year.

Will rural retail chains match the success of their urban counterparts? The rural consumer base can become a source of revenue for many companies, even during economic slowdowns. But success will come to those only those who understand and exploit the dynamics of rural markets to their advantage. "Farmers want to understand the value proposition of brands in terms of cash savings and ease of product or service procurement," says Ankur Bisen, Head (Retail and Consumer Products) at consultancy Technopak Advisors. "Retailers need to understand the income-expenditure cycle of farmers and link it to their products and services."
Tags: Retail chains | organised retail chains | rural market | Godrej Agrovet | Hariyali | Choupal Saagar | ITC