Dancing with an elephant

Tata Steel’s acquisition of Corus was a marriage made in heaven. Now Ratan Tata, along with the top brass of both companies, is burning the midnight oil to make the union work. 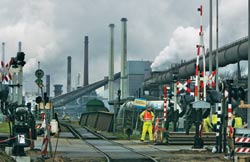 Tata Steel-Corus factory in the Netherlands
February 13, 2008, 2.30 p.m. B. Muthuraman, Managing Director, Tata Steel, steps out of his third-floor corner room at Bombay House, the corporate headquarters of the Tata Group. He’s on his way to the airport to catch a flight to Bangkok to visit Tata Steel, Thailand (formerly Millennium Steel, which the Indian steel giant had acquired in December 2005). It won’t be a long trip.

The 62-year-old Muthuraman is scheduled to be in Chennai on February 15 (to meet a personal commitment). After a few days back in Mumbai, Muthuraman is once again winging his way—this time to London, where Corus, the $16-billion steel giant which the Tatas acquired last year, is headquartered.

On an average, Muthuraman spends half-a-month living out of his suitcase. Ditto for Group CFO Kaushik Chatterjee. For, ever since Chairman Ratan Tata pulled off the mother of all mergers & acquisitions last April, the process of integrating the two behemoths has begun in right earnest. As Muthuraman puts it, the Tata Steel-Corus combine may be two legal entities but the operating model being pursued is that of one enterprise. “In terms of long-term vision, capital expenditure, research & development and the like, we operate as one virtual enterprise,” explains Muthuraman.

Ratan Tata
Together, the two corporations make for a formidable presence—a presence in 42 countries, a combined capacity of 25 million tonnes (and counting), and a collective sales turnover of Rs 1 lakh crore (estimated for the year ended March 2008). Such sales would make Tata Steel-Corus the second-largest private sector company in India, as things stand today, on a consolidated basis. Add the capacities of NatSteel in Singapore and Tata Steel, Thailand, to the Tata Steel-Corus combine, and you’d realise that Tata has created the world’s fifth-largest steel player (by volume) with a capacity to make 28 million tonnes of steel every year. In terms of revenues and profits, Tata Steel ranks third and second, respectively (see Capacity for Leadership).

But those are just the headline numbers. Sift through the body text and the fine print, and you will discover that making the union work is a task of gargantuan proportions that calls for a huge investment, not so much in terms of hard cash but in terms of people and time.

Thank god for video-conferencing, or else the top brass of Tata Steel and Corus would be spending almost all of their days away from home (after all, there are plenty of learnings for Corus to take home from Tata’s Jamshedpur facilities; and Tata Steel has a lot to learn from Corus’ European operations).

Consider, for instance, the various committees that have been set up to integrate the two behemoths and squeeze out synergies from both sides. But to begin with, the Tata Steel Board itself had to be reconstituted to reflect the transnational nature of the enterprise. Ratan Tata is the Chairman, Jim Leng, former Chairman of Corus, is now Deputy Chairman, and there are four directors from Corus on the unified board.

The most crucial committee is for Strategy & Integration, which is chaired by Ratan Tata, and which meets once a month. Then there are five group centres, manning five key functions, who report to Muthuraman and CEO Philippe Varin. Other committees include one for human resources (to work out common principles of assessment and compensation); and an investment committee (to avoid suboptimal decisions). Other than this, some 150 executives work in numerous 4-5 member cross-functional teams (across Tata Steel and Corus). Of course, making the integration work will call for a lot more than committees and meetings.

Corus, after all, is a completely different— and much bigger—animal than Tata Steel. It operates on margins of 10.8 per cent, as against Tata Steel’s 39.3 per cent. It is also four times the size of Tata Steel (in revenues and capacity), which makes an amalgamation into the Indian company all the more challenging.

Also, unlike Tata Steel, which has captive sources of raw material (coal, iron ore in the main), Corus relies on third parties, which explains the drain on profitability. What’s more, the $13-billion acquisition was funded with $6.3 billion of borrowings, which threatens to submerge Tata Steel in a turbulent sea of debt. After the acquisition of Corus, Tata Steel’s debt-equity ratio soared to 1.6 from 0.3. Says Rakesh Valecha, Director, Fitch Rating: “Rising debt was a concern.But the large equity infusion with support from its group holding company—Tata Sons—helped strengthen the balance sheet on a consolidated basis.” Group CFO Chatterjee isn’t spending too many sleepless nights worrying about the debt burden (which stood at Rs 34,000 crore as of January 2008). Clearly, the benefits outweigh the pain by far. “More than anything, Corus gives us better technology,” says the CFO. Adds Muthuraman: “Corus gives us scale, a larger market and, most importantly, a high-quality R&D set-up. Overnight, we got 20 million tonnes of steel capacity at virtually half the price.

Today, it will take nothing less than $20-25 billion to build such a capacity.” The R&D benefit can’t be underestimated, what with Corus employing a little over a thousand metallurgists, engineers and doctorates. “Corus has expertise in building construction, and technological solutions for manufacturing steel for highrise buildings. This will be brought into India,” adds Muthuraman. With Corus, Tata Steel also gets a foot into the door of the quality-conscious European markets like Germany, Holland and France. Says Rakesh Arora, Research Analyst, Macquarie: “A growing presence in Asia and the developed European economies will help the company leverage the economies of scale from Europe and harness growth from Asia.”

Experts aren’t worried about the $8.5-billion (the debt came down after the $2.2-billion rights issue) debt on the balance sheet of the group. Says Arora: “The group generates cash profit of $4 billion, which means the debt can get recovered in two years.”

Whilst Corus brings plenty to the Tata table, it’s also crucial for the British steel maker to lean on the efficiencies of Tata Steel, and exploit every synergy possible. Corus is expected to save $450 million over three years. A start has been made in fine style, with a saving of $100 million already materialising so far by way of synergy benefits.

The synergies are operating at three levels. At the first level, which Muthuraman calls the “low-hanging fruit”, savings are arising on the procurement and logistics fronts. For instance, zinc and scrap purchases have been consolidated between Tata Steel and Corus, and group company Tata NYK has been called in to reduce Corus’ transportation costs. At the second level, manufacturing processes of Tata Steel are being replicated at Corus.

Example: Corus uses scrap to make steel. Tata Steel uses hot metal, which is cheaper, and consumes less energy. The attempt is to reduce Corus’ dependence on scrap and increase the reliance on hot metal. Similarly, an attempt is under way to make Corus’ blast furnaces more efficient so that coke consumption is reduced even as its production is increased.

The synergies are working both ways. Tata Steel, Jamshedpur, for instance, has adopted technology from the Corus Ijmuiden plant in Holland, which reduces the heating time of its coke oven from 24 days to 9 days, thereby increasing the availability of the oven for production by 15 days. Similarly, by adopting the bathing model from the Ijmuiden plant, the company has increased its production by 55,000 tonnes of steel per year—that’s nearly a jump of 2 per cent in production at the same fixed cost.

Yet, the problem for Tata Steel is that at a group level (along with Corus), its margins come crashing down from levels of 40 per cent to 13-14 per cent. And that’s largely because Corus is totally dependent on raw material that is purchased from the open market. This, in turn, brings down the Tata Steel-Corus combine’s self-sufficiency level from 100 per cent to 20 per cent.

That’s why the Tata Steel top brass is willing to pay top dollar for coal and iron ore assets anywhere in the world. Already the company has invested $88.2 million to acquire 35 per cent in the Mozambique coal project; and it has announced an investment of $1-1.5 billion in the next 3-4 years in a joint venture in Ivory Coast. Once these projects come on stream, the group’s raw material security will get boosted to 40 per cent. “Buying mines will help us increase EBITDA margins to 30 per cent by 2012,” says Muthuraman.

On February 20, Tata Steel unveiled its new vision of value creation, which focuses on benchmarking itself with the global best on two parameters: One is return on invested capital; and two is corporate citizenship by improving safety levels and reducing carbon dioxide emissions.

India will be at the centre of Tata Steel’s growth strategy in the years ahead, but the big play is clearly Corus; it will determine whether Tata Steel can become the world’s premier steel company—not necessarily in volume terms but on various other parameters like quality, costs, quality of balance sheet and product mix.