After enduring a tough couple of years, hardware giant Dell India is set to become both the fastest geography within the company and fastest tech MNC in the country to cross $1 billion in revenues. Can it make the good times last? Rahul Sachitanand tells us how the company re-invented itself in India.

Three years after it entered the Indian market, hardware giant Dell made its most significant statement in India yet. In mid-August 2008, amidst a laser show, thumping music and rolling strobe lights, the Round Rock, Texas-based hardware giant announced the global launch of its new range of Latitude and Precision laptops from Bangalore. Michael Dell
From being a company that catered almost exclusively to the Indian operations of multinationals until 18 months ago, Dell has re-invented itself in this country, becoming the largest player in the corporate market, targeting small and medium enterprises and going after the lucrative government market. “The local operations have grown 12-fold over the last seven years; so we are very happy with this growth,” says Dell.

Along the way, Dell India has crossed revenues of $1 billion (Rs 4,300 crore), in only 30 months since the launch of full-fledged operations in this country—the fastest by any tech MNC—and is now setting the bar even higher. It plans to take its local operations past the $3-billion (Rs 13,200 crore at the current exchange rate) revenue mark over the next four-to-five years.

The Indian market is red hot. According to data from computer hardware industry body MAIT, it has grown over 16 per cent from 6,431,640 units (including desktops, notebooks and servers) in 2006-07 to 7,466,484 units in 2007-08. While desktop sales have actually declined by 2 per cent, that loss has been more than offset by a 114 per cent jump in laptop sales. “It has been a phenomenal story until now and we’re poised to grow even further,” boasts Sameer Garde, the recently appointed Country GM for Dell India.

Garde has the numbers to back his boast. According to data from market researcher IDC (see Gaining Speed), Dell is now the third-largest computer hardware vendor in India (it shares this position with Lenovo) with a 7.6 per cent market share. More importantly, Dell has made rapid gains in some key markets. In the mass-market X86 servers, Dell has, for the first time, nosed ahead of IBM, with a 23.7 per cent share of the market, compared to 21.9 per cent for Big Blue and is the largest player in the large business segment.

Building blocks
Three years ago, Dell was seen as a specialist hardware vendor to large multinationals setting up operations in India and for the IT and ITES industry, which aped the set-ups of their mainly US-based customers. Since then, Dell has worked on expanding its revenue base, first targeting large Indian companies and then expanding into the booming consumer, government and education segments.

“Dell launched its consumer business only 18 months ago and it is already a Rs 800-crore unit,” says Rajan Anandan, former Dell India head who moved to Microsoft India recently. Then, Dell India’s government business has grown six-fold over the last six quarters, adds his successor Garde.

Target: #1
Dell has set its sights high—on the numero uno position in the Indian computer hardware market. And it is getting there; it is already the #1 player in the corporate market. Now, it plans to broaden its footprint. In the government market, Dell has a share of over 9 per cent compared to just over 2 per cent a year ago.

Similarly, it sees a massive opportunity in the education sector. “There are over 1.4 million schools in the country and, maybe, only 20,000-30,000 are IT-enabled,” says Garde. Then, in e-governance, only four states have taken the lead while the remaining 25 still have a long way to go. Laptop sales zoom: Dell’s plant at Sriperumbudur near Chennai that started operations in July last year
Dell has also slowly learnt the ropes in the consumer market, long dominated by global arch rival Hewlett Packard. “The biggest trend in the consumer market is mobility. Dell’s customers are often buying a notebook as their first computer. They want personalisation for their machines and cool features like wireless on the go, integrated cameras and enhanced sound and graphics,” says Mahesh Bhalla, Director, Consumer Sales, Dell India. Then, to make its computers more exciting, it offers them in 11 colours and has also broken the direct selling model, since many buyers demand a touch-and-feel environment.

Sameer Garde
So, Dell has tied up with the Tata Group’s Chroma electronic retail chain to sell its machines and also plans to foray into the hinterland with its expanding channel network. “Our sales affiliate programme works on a zero-inventory model that allows people to try products and order them from any of our 1,000-odd partners,” Bhalla says. Dell India also offers onsite services to its customers and a complete cover service, which lets people exchange damaged computers, no questions asked. “We are the only company to offer this service,” says Bhalla.

Desktop decline
Despite its galloping growth in the market, Dell has had to be sensitive to key changes in the market. One such change is the sharp decline in sales of desktop computers and the massive growth of the laptop market. “Multinational vendors now control 80 per cent of the laptop market because they offer a broader range of products,” says Diptarup Chakroborti, Principal Research Analyst at Gartner, a technology consultancy. Most of the action in notebooks is focussed on the consumer market, especially in urban India, where people are transitioning from owning just one computer to owning two or more notebooks, and Dell is riding this boom. 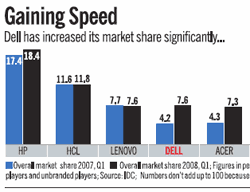 Click here to Enlarge
However, it won’t all be oneway traffic in Dell’s favour. It can expect to face the full force of HP and a renewed Acer in the market. “HP has more brands (HP, Compaq and, possibly, Voodoo, its luxury PC unit) in India and offers the widest choice. Dell has plenty of work to do before it can catch up with HP,” says Chakraborti. That’s because success in the large enterprise market doesn’t guarantee success in the booming consumer market. “The markets are completely different and require distinct strategies,” he adds.

However, having trebled its percentage share in the consumer market (from 3 per cent to 9 per cent) over the last 12 months, Garde and his team now want more. “India is expected to be among our four largest IT markets in the world and the consumer market will be a key driver of our growth here,” he says. 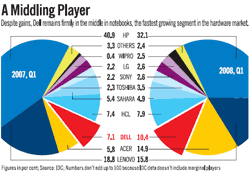 Pallab Talukdar, Director, Enterprise Business, Dell India
Click here to Enlarge
At the same time, Dell’s other big growth market is also seeing some changes, as companies, strapped for real estate and power to run their servers, are opting for new blade servers, which are modular servers with more processing power. They also allow for the removal or repair of defective components without any down time. “Dell’s servers are 30 per cent more power efficient than those of IBM and HP,” says Pallab Talukdar, Director, Enterprise Business, Dell India. According to industry estimates, Dell has a 60 per cent share of the mass market X86 server segment, and Talukdar says it is gaining on its biggest rivals, IBM and HP.

“We have the broadest range of servers in the market,” he says. Part of the challenge for all hardware vendors, according to industry analysts, is to manage the exponential growth of data (estimated say to be growing at 50-60 per cent per annum), and the rising costs of real estate and power. “The cost of storage is falling but is not yet zero. To manage the sharp increase in data, companies will need to increase their IT spending by 20-30 per cent, which they can’t manage today,” he adds.

So, Dell will step up its use of technology, and hawk emerging concepts such as “Cloud Computing” (providing IT as a service rather than as a product) and data virtualisation (providing easy access to information notwithstanding its actual physical location) to help its customers make better use of their IT investments.

Pallab Talukdar
“We see ourselves as a one-stop shop for all our customers’ requirements. Our aim is to ‘Simplify IT’ for our customers. We want to be able to reduce cycle times for our customers and reduce the time spent on installation,” says Talukdar. A key part of this plan revolves around its year-old factory near Chennai, that has helped reduce delivery time from nearly a month to as little as one day,” says Garde.

Recently, Dell doubled its 400,000-unit production capacity and started a laptop line at the site. Then, Dell is also future-proofing its products, by adding features such as 10 GB Ethernet and Quad Datarate InfiniBand, a method for high-speed transmission of data between computers and networks.

Small is big
Some weeks ago, P. Krishnakumar, Director, Marketing, Dell India, found himself face-to-face with Dell’s next big opportunity in Ahmedabad. Speaking to a few small drug discovery companies in the city, he stumbled on a massive opportunity—not just to sell them Dell products, but also to act as de facto Chief Information Officer to many of these companies. There are seven-and-a-half million SMEs in the country today, but only one million of them actually use any form of IT. Dell sees a third of the SME universe as an addressable market. 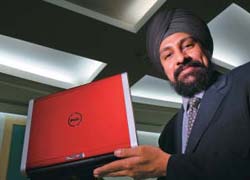 Mahesh Bhalla
Rather than provide them with stripped-down solutions to keep their costs low, Dell is trying to put together its own secret sauce to increase its presence in the market. “We have provided full versions of our software to all our SME customers (except for anti-virus solutions) and we’ve tied up with Ubuntu Linux and Open Office, both free softwares, to provide customised solutions to this market,” says Krishnakumar.

Dell is also altering its business model to improve its presence in India. “Direct selling is not a religion anymore,” says Garde. Rather than try and manage all its customers in-house, Dell has begun to roll out its channel programme (which accounts for over $12 billion of its $61.1-billion revenues globally) in India. “The channel is our next frontier. We will work directly with our enterprise customers, but we need a robust channel to enter new markets,” says Garde.


Despite these moves, industry observers say Dell has a long way to go both in the overall market and in specific emerging segments. According to a senior HP executive, Dell has only a fraction of HP’s vast retail presence and has only one brand. Then, Dell continues to be seen more as an industrial and enterprise-driven vendor, compared to HP and even Acer, which have spanned the price and feature range with their machines. “We have laptops starting at Rs 20,000 and going all the way to Rs 2 lakh,” says the HP executive.

This means that HP continues to hold 40 per cent of the overall laptop market, compared to a little over 10 per cent for Dell, according to IDC estimates. Garde also needs to keep a wary eye out on arch rivals HP and HCL, who have matched, and even exceeded, Dell’s gains in these markets.

From a market that distrusted branded players till as recently as five years ago, the Indian market is now in a full-blown affair with big brands. Riding on this boom, large MNCs such as Dell and HP today account for over 60 per cent of the Indian hardware market. Now, Dell has thrown down the gauntlet to its competition by holding its first global launch from India. With the market expected to grow at 20 per cent annually, there is plenty of room for Dell, and, indeed, all the other players to grow exponentially in future.

Are Indian Microsofts in the making?