India’s most valuable pharma firm has stumbled, as a US subsidiary gets on the wrong side of the FDA and a handful of exclusive arrangements come to an end. Can founder Dilip Shanghvi get Sun Pharma back on the road to supernormal profits?

When Sun Pharmaceuticals completed 25 years last year, the mood at the suburban Mumbai headquarters would have been celebratory. And why not: India’s most valuable pharma company had indeed come a long way ever since its founder Dilip Shantilal Shanghvi started the company in Calcutta in 1983. From revenues of Rs 10 lakh in the first year, Sun had raced ahead to become a Rs 3,502-crore innovation-led entity by March 2008. For investors, this was a company that could do no wrong— since going public in 1994, its profits had never fallen year on year! And an investor who would have put Rs 100 in the public issue would be richer by a cool Rs 5,600 today (excluding dividends).

Towards the end of the year, however, an unforeseen cloud dampened the upbeat tone. On the last day of October 2008, the US Food and Drug Administration (FDA) fired off a warning letter to Caraco, a US subsidiary of Sun, citing quality control issues.

If Sun’s silver jubilee year ended with a setback, things only got worse in the 26th year—in June, the US FDA seized drugs from Caraco’s Detroit unit, as it allegedly violated good manufacturing practices, or GMP as they’re known as in industry parlance. The pressure had, in the meantime, begun to show on the financials of both Caraco and Sun— the former accounts for roughly 35 per cent of Sun’s top line. For the year-ended March 2009, the US subsidiary registered a 42 per cent drop in profits, from $35.4 million ( about Rs 170 crore at current rates) a year ago, to $ 20.5 million (Rs 98.4 crore).

But the bigger blot was on the books of Sun Pharma. For the first time since getting listed, its profits tumbled in this fiscal’s June-ended quarter, by 67.3 per cent, even as revenues slipped by 24.4 per cent. If that wasn’t enough, Caraco was hit with two class-action suits in July; by end of the month, Caraco’s CEO Daniel H. Movens had put in his papers. Analysts don’t expect the woes of Caraco—which Sun had acquired in 1997—to end in a hurry, which is why they expect sales and profits to keep dropping for some more quarters to come. 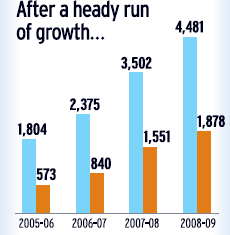 For Shanghvi, who at 27 preferred starting Sun Pharma to joining his father in his distribution venture, the Caraco setback is the proverbial bolt from the blue—and easily the rudest bolt in a long time.

“It is clearly a major challenge for Sun Pharma and I do not think that we have faced anything as massive as this in the past,” says the Chairman & Managing Director, who was instrumental in turning around Caraco in 10 years after taking it over as a bleeding proposition. The Caraco case becomes even trickier as it is a separate company—even though its financials are consolidated into Sun Pharma—which allows it a certain amount of operational independence. That Caraco is listed on the American Stock Exchange also makes it a particularly sensitive issue. From Sun’s point of view, Caraco is its outpost in the US market, which accounts for over a third of its revenues, and is therefore a critical prong of its growth game plan.

Analysts are visibly nervous about the company’s future as a generator of supernormal profits. “The US FDA action will have direct implications on Caraco’s manufacturing revenues and we believe there will be some spillover effect in distributed revenues as well,” says Praful Bohra, a pharma analyst with Jaypee Capital. Credit rating firm CRISIL believes the US drug regulator’s action could have a material impact on Sun Pharma’s business in the US over the long term, as it could impact market confidence and reputation.

If the Caraco case wasn’t enough, what also threatens to take the wind out of Sun’s sales is the fact that the basket of products that enjoys exclusive selling arrangements in the US generics market is emptying out. Such exclusive arrangements are one-time bolster shots that can last for 180 days, during which period manufacturers can chew on margins as chunky as 70-80 per cent.

In fact, Rakesh Nayudu, a pharma analyst with SBICAP Securities, says he had anticipated a slowdown in Sun’s top line and a fall in profits even before the Caraco dispute broke out for precisely this reason. Analysts also caution that Sun faces intense competition and pricing pressure in the regulated generics markets, such as the US, thanks to the aggressive defense tactics followed by innovator companies (like, for instance, the launch of authorised generics, especially for blockbuster drugs going off-patent.)

Shanghvi and his core team— which includes brother-in-law Sudhir Valia, a director on the board—have a multi-pronged plan to counter the adverse conditions. Prong #1: Continue to stay focussed on the US, and on more complex drugs going off-patent as the higher the complexity, the fatter are the profits. Another element of the revival blueprint is to intensify the focus on international branded generics, which currently contribute 9 per cent to revenues.

It’s a business that’s growing by 30-40 per cent annually, and Shanghvi sees scope to increase the contribution, both in terms of percentage of revenues as well as in value. Finally, Shanghvi wants to cement his position in the domestic market amongst the top 5, and consolidate his dominant positions in certain categories.

Even as most of Shanghvi’s energies will be centered around clearing the Caraco muddle, what will hold Sun Pharma in good stead is the good work done over the years. “Sun has over the years built capabilities that are excellent, namely, the product portfolio and a strong intellectual property base,” says Nayudu of SBICAP Securities. A sound financial platform will also come to its rescue. Sun Pharma is a debt-free company and had cash of over Rs 3,500 crore on its books at the end of March 2009.

Two generic products that could give Sun a fillip in the near term are the generic versions of Eloxatin and Effexor XR. Macquarie Securities says Eloxatin on a conservative estimate could easily generate $50 million (Rs 240 crore) in profits during the exclusivity window and boost earnings for the current fiscal by around 17 per cent.

Sun’s ongoing problems are proving to be stumbling blocks in its quest for growth—a lot of which has been inorganic in the past. In 2007, Sun made a play for Israeli firm Taro Pharmaceuticals, and today controls 36.4 per cent of it. Taro, however, has dragged Sun to court as it felt the Indian company had to make a special tender offer, which would provide protection to minority shareholders. A legal battle has been under way since last year, and the matter is currently in the Israel Supreme Court.

“Our current focus will be to address issues at Caraco,” says Shanghvi. For a man who began with small operations in West Bengal, Bihar and Gujarat, acquisitions of companies in countries like the US (other than Caraco, Sun also bought Chatten Chemicals, Able Labs and niche brands) and in Hungary (ICN), are indicators of his resolve and focus—qualities that will hold him in good stead in the battles ahead.