An ambitious project to wire up Indian judiciary promises to not just speed up delivery of justice, but also make it accessible to everyone from anywhere, anytime. 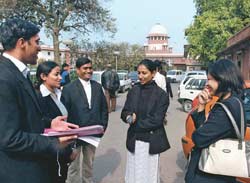 Expedite delivery of justice
The dictum “justice delayed is justice denied” seems to have become an old chestnut as far as Indian judiciary is concerned. At last count, Indian law courts—Supreme Court, high courts and district courts—had piled up over 30 million pending cases, with 5 per cent of that number being added to the backlog every year and district courts accounting for over 90 per cent of such cases. The figure of 30 million, however, reflects only those litigants who have had the courage and means to go to a court. “Over 75 per cent of the Indian population, by some estimates, has absolutely no hope of obtaining any access to the adjudication provided by law courts— and justice—in the current scheme of things,” points out Prashant Bhushan, a noted Supreme Court advocate. “How many people have the means of even engaging a lawyer? Even if you do, the judicial procedures are so opaque and cumbersome that you could end up spending decades and bagfuls of money without any hope of ever getting justice.”

While official data about ‘delays’ (as defined against some official benchmark) in Indian law courts is difficult to come by, a study of Bangalore City Civil Courts revealed that between 1989 and 2000, not even a single case could be disposed of in the time frame of 365 days that was deemed reasonable. The cases that were disposed of in 1999-2000 had taken on an average 2,138 days to be cleared. The situation in other 12,400 district and subordinate courts, located in 2,066 towns, is no different or is worse. So, has administration of justice in India been collapsing? Probably yes... if not for some hopes on the horizon, with technology being one of them.

In a quiet—but plodding—manner the musty and anachronistic law courts of India are upgrading themselves into intelligent workplaces where judges and administrative staff will be aided by all the mod cons of digital age, including IT networks, databases and video conferencing tools. Some of the work is already visible: websites of the Supreme Court, almost all high courts, and at least three district courts are up and running, complete with rosters of sitting judges, variously searchable cause lists, case status enquiry, judgments and various downloadable forms.

“The IT enablement of Indian judiciary started slowly in early 1990s but has picked up speed only in the last couple of years,” says Justice (retd) G.C. Bharuka, Chairman of E-committee, the nodal agency set up in February 2007 to oversee a Rs 854-crore project for ICT implementation in Indian judiciary. The objective of the five-year, three-phase project is ambitious. “Indian judiciary will be made by and large paperless by the end of the project and any justice seeker will be able to reach the courts from anywhere, anytime, including through e-mailed petitions,” says Bharuka.

The project, being implemented by National Informatics Centre (NIC), has got off to an exciting start. By June 2007, each of the district and subordinate court judges was provided an HP laptop—12,155 in all—with internet connectivity.

(Most judges of the Supreme Court and high court, where computerisation started in the early 1990s, already have their own laptops or desktops.) “Many of the judges had not even seen a computer in their lives. So, we are training them to use laptops and other IT tools. In addition, all court complexes in the country are being provided with Wi-Fi facility,” says Bharuka.

The project also envisages giving digital signatures to all the judges so that they can upload their daily judgments on a central database (http://www.indianjudiciary.in/). The court complexes are being provided with a ‘computer room’ for housing ICT hardware and equipment with power back-up and eventually will have LAN and video conferencing facilities. The ongoing IT training of judges, being provided by Gurgaon-headquartered New Horizons India, has been extended to the clerical and administrative staff of the courts.

The administrative practices followed by over 12,000 district and subordinate courts vary not only in terms of designations of judges but also in management of functions like accounts, Nazarath (processing of petitions and orders), copying, and HR. “A lack of uniformity has made seamless networking of judiciary— from Supreme Court down to the lowest courts—a challenge,” says Jaideep Gupta, another Supreme Court lawyer.

The technological upgrade of law courts also needs to follow many disparate processes of the judiciary— scrutiny of a plaint, issuance of summons and notices in prescribed formats, filing of written statements by a defendant, framing of issues, examination of witnesses, recording of evidence, hearing of arguments, filing of interlocutory applications (IAs), creation of certified copies, etc.

“Indian courts have been very sloppy in managing case flows, resulting in wrong or arbitrary prioritisation of cases to be heard. They urgently need to adopt IT systems for efficient and fair case flow management,” adds Gupta. Those systems would also help make judges accountable for their ability to clear cases and in development of time standards for the progress of a case.

While the government seems willing to provide all the trappings of a smart judiciary, the impact on the ground seems to be painfully slow. On a visit in late January to the Dehradun district court, this writer saw courtrooms working without anything resembling a digital device.

“All work here is done manually. I have never seen a judge carrying or using a laptop,” says Avadh Bihari Pant, a lawyer. Rajiv Gupta, a Delhi-based advocate, says court websites, while being hugely helpful in tracking cases, are never updated in time, have incomplete information and don’t work satisfactorily.

To show what he meant, he tried searching for an order, passed a month ago, on the website of Delhi district courts and drew a blank. “It’s probably a case of courts’ tardy ways dictating the pace of IT, instead of the other way round.” For instance, a certified copy of an order, needed for filing an appeal, continues to be asked for by courts when it can easily be downloaded from the official website.

Some people are plain cynical about the whole exercise. “The delays and inefficiency in law courts happen because of tardy processes of adjournments, objections, rejoinders and dilatory tactics adopted by lawyers. IT can do very little to improve this situation,” says Birinder Singh, a Chandigarh-based advocate.

Others like Prashant Bhushan point towards funds crunch resulting in insufficient number of courts but also perennial problem of unfilled posts of judges. “For a population of over 1 billion, the spend on judiciary is less than 0.2 per cent of GDP while it should be at least 1 per cent,” he says. Adds Rajiv Gupta: “The real benefit of technology would be realised when justice would be delivered with minimum requirement for the litigants to produce themselves in courts.”

That, however, has already begun on a limited scale; videoconferencing is now being used, for instance, in Delhi district courts for bail and remand of undertrial prisoners without producing them in courts. Another evidence of why technology will have to be one of the saviours of India’s crisis-ridden justice delivery system.

Dancing with an elephant