Customers are clueless and dealers furious as GM cuts its losses and decides to withdraw from India. Only two years ago, General Motors had declared it would invest another $1 billion in India and launch 10 new models. As late as April 28, Jack Uppal, Vice President, Marketing and Customer Experience at GM India, had sent a signed mailer to the company's 150-odd dealers, informing that the company would be launching a new model of the Chevrolet Beat - GM's leading brand in India - in July. "Be ready for the Mobility revolution with the New Beat MCM from Chevrolet," it read. Less than three weeks later, came the announcement that GM had decided to stop selling in India altogether from the end of the year, though it would continue manufacturing for export at its plant in Talegaon, Maharashtra.

"We explored many options, but determined the increased investment originally planned for India would not deliver the returns of other significant global opportunities," says Stefan Jacoby, President, GM International. "It would also not help us achieve a leadership position or compelling, long-term profitability in the domestic market. Difficult as it has been to reach this decision, it is the right outcome to support our global strategy and deliver appropriate returns for our shareholders." Nor is there any possibility of a rethink. "The decision was taken following extensive review of our future product plans and is the final decision. Our best path to improved financial performance is to focus on manufacturing in India for export markets," a GM India spokesperson told Business Today.

But the decision is a shock for the company's employees, dealers and vendors - apart from the 600,000 Indian users of GM's Chevrolet cars. There had, however, been indications. More than a year ago, the company had announced the impending closure of its plant in Halol, Gujarat, and the sale of its assets to SAIC Motor Co. Around 1,100 workers at the plant were given the option of shifting to the Talegaon unit and half of them have taken it. Though production at the plant, with a capacity of 110,000 vehicles annually, ceased in April, the sale is still stuck due to some objections raised by SAIC's local subsidiary MG Motor India, as well as the protests of the remaining workers who have refused to move. But even for them, the complete withdrawal has come as a jolt. "The company called the workers' representatives and gave us the news," says Rachit Soni, union leader at the GM Workers' Association at Halol. "We suspect that GM intends to exit all operations in India over the next two to three years and will continue to fight for our legal rights."

With production likely to be reduced, around 400 of the 3,000-odd employees at the Talegaon plant - with a production capacity of 130,000 units annually - have also been given notice, as have most of the 200-250 people working at GM's Gurgaon office. Most will be terminated by September this year, with a few carrying on till next March. They are all being given a severance package of 45 days salary for every year of service. Severance packages have been offered to dealers as well, but - saddled with around 18,000 GM vehicles, which they will now be hard put to sell - they have turned them down. Indeed, 20 dealers' bodies are holding discussions with their apex body - Federation of Automotive Dealers' Association, India - to decide how best to take legal action against GM.

"There is virtually no demand for Chevrolet cars now," says a Delhi dealer who does not want to be named. "Our inventory is stuck. The few customers who come in only ask about discounts. Some jokers even suggest we should give away an additional car free to every buyer as an incentive." Dealers are convinced that GM had decided to exit India much earlier but kept them in the dark. "On the contrary, we were told there would be a series of launches this year," says another dealer, seeking anonymity. "We were assured GM was launching its compact sedan Essentia, its Beat Activ hatchback and its compact SUV Adra in India, which had been showcased at the last Auto Expo." They are also upset over a non-disclosure agreement the company wants them to sign, which, they maintain, curtails their basic legal rights. Vendors, too, are also holding hectic parleys to consider legal remedies. 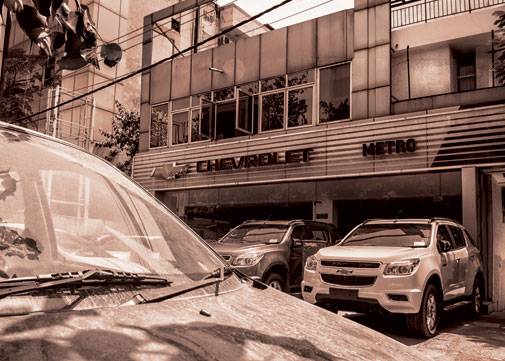 "We will support our affected customers, employees, dealers and suppliers," says Kaher Kazem, President and Managing Director, GM India. But he will not go into details. "We are committed to maintaining a service network across key locations in India with staff trained to take care of all the maintenance and repair needs of Chevrolets on the road," says the company spokesperson. He confirms that Chevrolet Beat hatchbacks made in India are already being shipped to Central and South American markets such as Mexico, and will continue to be. The sedan Essentia, which dealers expected to sell in India, will also be rolled out later in the year from Talegaon, but only for those distant markets.

The reason GM is continuing with exports from India is simple - its exports have been much more successful than its domestic sales. In 2015/16, the company shipped out 70,969 vehicles, almost three times the number it sold within India. Though GM was one of the earliest post-liberalisation entrants into India among auto companies, starting with a 50:50 partnership with Hindustan Motors in 1996, its current share of the Indian auto market is below 1 per cent, against Maruti Suzuki India's 47.6 per cent and Hyundai Motors India's 16.8 per cent. Accumulated losses between 2008/09 and 2015/16 amounted to Rs 8,110.7 crore. It got even worse in 2016/17, with sales falling a sharp 21 per cent to just 25,823 units. Not surprisingly, the number of dealerships has also shrunk from 300 to 150 in the last few years.

Though it launched 20 models in all in a host of categories, starting with the Opel brand - Astra, Corsa, Corsa Swing, Corsa Sail and Vectra - followed by the Chevrolet brand from 2003 - Beat, Forrester, SR-V, Optra, Optra Magnum, Tavera and more - none of them went far with Indian customers. The nadir was reached when its MPV Tavera, launched in India in 2005, was found in 2013 to have been fudging emission data for eight years. The company recalled all its vehicles to fix them, but its reputation was heavily dented in the process. 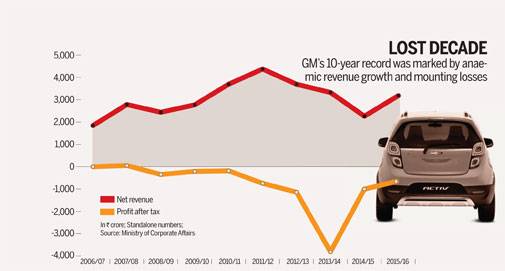 GM India ended its partnership with Hindustan Motors in 1999. Thereafter, it drove solo until it was nearly knocked off the road by the economic downturn of 2008. The world's biggest carmaker by volumes at the time, GM was among the marquee US companies that were forced to file for bankruptcy in 2009. With generous US government support and changed strategies, it recovered - but it was never quite the same, shedding a number of once-iconic brands.

In 2009, GM India sold half its shareholding to China's SAIC Motor Co, with which it already had a partnership in China. (It bought back 43 per cent of the shares in 2012.) Thereafter, a number of SAIC's models were also introduced in India, but these have made little headway. In March this year, three of SAIC's models - Sail hatchback and notchback and Enjoy - were scrapped following reports of mechanical failures and general poor quality.

Consistency was never a virtue for GM India, which kept introducing and withdrawing models - when they failed to make headway - with alarming regularity, thereby reducing their resale value. The pricing of models was equally capricious, ranging from `3 lakh to `30 lakh, confusing buyers. Top management changes followed the pattern, which in turn worked against a long-term strategy. The company has seen nine CEOs in its 21 years, while Maruti, in comparison, has had just five CEOs in 35 years. Among the nine, the only one to make a mark was Karl Slym, who headed the company from 2007 to 2012, and during whose term - despite the bankruptcy upheaval - GM India achieved its highest sales of 110,048 units in 2011/12. "GM India failed to concentrate on brand-building activity or start customer loyalty programmes," says Jagdish Khattar, former Maruti CEO and industry veteran.

But perhaps the biggest mistake GM made was to impose its international strategies on India without regard for local conditions. "GM's India operations are controlled by its South-Pacific office," says Khattar. "The India CEO has to report to it in all matters of product, strategy or sourcing. He spends more time overseas than with his own team or with local dealers. A highly complex and diverse market like India needs more direct attention." His words are echoed by Gerard Detourbet, Global Vice President, Renault Nissan, who designed its runaway Indian success, Kwid. "To succeed in India, you need to build your cars to Indian specifications and prices," he says. "If you use global specs, you court disaster." It is not only GM India which has suffered - according to its latest investors' report, GM has been consistently bleeding across major markets, including South Africa, the Middle East and several Asian countries, where it lost a combined $838 million in 2016.

Given GM CEO Mary Barra's strategy of pursuing profit rather than volumes, GM India was ripe for the chopping block. Since January 2014, when she took over, Barra has taken GM out of several losing markets - including Russia, Thailand, Indonesia and South Africa, apart from India - and closed down 14 plants. The manufacturing unit in South Africa has been sold to Japan's Isuzu Motors and the entire European division - barring the Opel AG brand - to France's Peugeot. Barra has decided to focus exclusively on high margin markets such as North America, where GM's light trucks and SUVs are doing well, select countries in South America like Brazil, and China alone in Asia, apart from the company's ride-sharing venture, Lyft. Even so, Barra travelled to India three times in her three and half year tenure so far before making up her mind. She even sought to sell the entire India operations to SAIC, which was in any case buying the Halol plant. "GM had proposed SAIC take over in India as it has done in Indonesia," says a source privy to the development who does not want to be named. "But SAIC's local leadership rejected the idea."

GM is not the only global automaker to have faltered in India. Fiat and Skoda sold even fewer units in India than GM in 2016/17. Skoda's parent company Volkswagen isn't doing much better either and even Ford Motor Co - barring the modest success of its compact SUV EcoSport - has been struggling. Like GM India, it exports more units than it sells locally. Bob Shanks, Ford's Executive Vice President, has admitted that India is a crowded, difficult market to which Ford's approach "needs to change". Yet other entrants have successfully cracked it, some after a number of early wobbles. While Hyundai, for instance, was a success from the start with its Santro in the late 1990s, Renault went through a number of flops before hitting the jackpot with Kwid - designed and developed specifically for the Indian market. Since then, its compact SUV Duster, too, has been a marked success. The field is wide open and few would bet on which player will nose ahead. ~

Who's the fastest of them all