If you have a medical problem, but do not want to visit a doctor or call one home, you now have a fresh option available. A number of start-ups have begun offering medical advice round the clock, either on telephone or online - some providing basic diagnosis and treatment suggestions, others a lot more.

For instance, MeraDoctor - a call centre in Mumbai, manned by a clutch of doctors - answers medical queries from callers in 13 states across the country. Started by mHealth Ventures India in 2010, it requires users to buy a subscription for Rs 100, entitling them to make unlimited calls for three months. Doctors address the health issues of a maximum of six family members per subscriber.

Another is HealthcareMagic, a Bangalore-based portal which offers two types of services: a panel of general physicians, who answer general queries, and another of specialists, who take the more difficult ones.

The specialists are a global crowd, with some based in the United States, Britain, West Asia and Africa, apart from India. Set up in 2008, the portal already has 2,500 empanelled doctors and caters to around 400 to 450 callers daily. Curiously, most of them are from North America and Europe. It has also roped in a number of corporate clients including SAP, HSBC, HCL and McAfee. 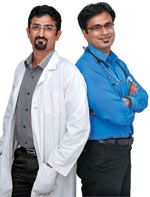 We can only provide medical advice. The final responsibility rests with the doctor who is treating the patient. Dr Arbinder Singal
A start-up providing only specialised medical advice is MediAngels, launched on Republic Day this year by the Mumbai-based duo of Dr Debraj Shome and Dr Arbinder Singal. The portal now has one of the largest panels of medical super-specialists in the world - 300 of them, scattered across 20 countries, specialising in 89 disciplines. At any time, there are eight doctors available, who help patients identify the specialists they need, and forward their queries accordingly.

MediAngels gets around 30 to 40 queries daily, which are answered within 72 hours. It has also tied up with 21,000 diagnostic laboratories across the country, which if required, visit the homes of patients (the portal refers them to) to collect samples and email the reports to MediAngels. Both MediAngels and HealthcareMagic charge Rs 150 for a general query and Rs 800 for a specialised one. To consult a doctor living abroad, a patient must fork out $100.

Some hospitals and individual doctors too are providing similar medical advisory services. The Apollo Hospitals group, for instance, has tied up with telecom provider Aircel to answer medical questions for Rs 45 per patient. Similarly, Dr A. Sampath Kumar, former head of Cardiothoracic and Vascular Surgery at the All India Institute of Medical Sciences, encourages patients to contact him online. He comments on reports they send him online and calls them to Delhi for a physical examination only if it is essential.

How useful is such treatment? How much can a doctor really tell without physical examination of a patient? "In almost 70 per cent of cases, physical presence is not needed," says Dr Vinay Aggarwal, National Head, Indian Medical Association. "In many cases, even with diseases like cancer, doctors can study reports online and give advice." Again, certain type of specialists are not available everywhere in India, especially outside the big cities. "We have very few super-specialists, especially in the smaller towns," says MediAngels co-founder Dr Arbinder Singal. "For instance, there are hardly 20 paediatric cardiologists in India."

He is himself a paediatric urologist - yet another discipline in which specialists are very few. "I treat kidney diseases and have seen a number of rare cases which do require a superspecialist to diagnose them."

Telephonic or online care, however, has some limitations. Some patients cannot do without the physical presence of a doctor, being unable to communicate their problems effectively either on the telephone or by email. "In these cases, our doctors tell them to go for a physical examination," says Kunal Sinha, who started HealthcareMagic. More importantly, long distance medical services are not allowed to prescribe drugs; they can only advise, or at best, suggest OTC, or over the counter, drugs, which are of limited use in serious illnesses. "Ultimately we are only providing medical advice," says Dr Singal. "The final responsibility rests with the doctor who is treating the patient."

The government has not yet formulated any regulations for such call centres and portals, though the latter exercise their own precautions. MediAngels, for example, has a Health Assurance Committee which checks out the qualifications of all doctors who seek to empanel with it, and ensures they are members of the Medical Council of India. (Those based in other countries need to be registered with the corresponding body in that country.) "The concept of medical ethics should evolve to include such services," says Dr Aggarwal. "I think availability of doctors online would be nice. If someone in Nigeria wants to take an opinion from a doctor in India, how else can he do so if he cannot afford to travel down?"

Both Rx Doctor Healthcare, the company that owns HealthcareMagic, and Angels Health, which started MediAngels, are working to add new features to their portals. "We are building a mobile application to enable Android phones to access our site," says Sinha of Healthcare. "It will be possible to download and use it through a mobile phone without having to open it through a browser." MediAngels is designing a software to enable patients to transmit their complete medical records online, including magnetic resonance imaging, or MRI, scans. It is also creating a video conferencing facility for patients.

A number of other countries - including Britain, the US, Mexico and Bangladesh - already have successful similar ventures. While Britain's is state run, it is privately managed in other countries. Indeed Gautam Ivatury, a director at mHealth Ventures, which started MeraDoctor, says he was inspired by the effort in neighbouring Bangladesh. The Telemedicine Centre in Bangladesh, a private company, where Ivatury is on the board of directors, runs a call centre called Healthline that provides medical consultation over telephone. "The idea is to replicate the Bangladesh success story in India," explains Ivatury.

So far Indian companies in the fray have been reluctant to discuss financials. However, Prashanth Prakash, partner at venture capital firm Accel India which invested $2.5 million in HealthcareMagic, says online health consultancy will pick up just the way e-commerce has.

"Their scale will depend on how fast companies increase adoption of these services and the number of international doctors they are able to draw on to their panels," he says.

Can F1 cash in on cricket fatigue?

Stop banging out the loans