Millions on the wall

After adding a million users a month last year, Facebook logs in to mobile and local languages to spread its reach.

It is 8.30 a.m. on a chilly January morning, and the silence on the fourth floor of Opus Towers at Mindspace in Cyberabad, part of Hyderabad's IT hub, is broken by a shrill cry: "They are in the lift." The glass door to the main office opens and people rush out with bouquets as loud music plays in the background.

They greet and hug a motley group of some 20 young people. What seems like the coming together of long-lost friends is actually Facebook India's way of welcoming its new recruits. Though it won't share the numbers, the social networking biggie is expanding aggressively to keep pace with the chart-busting growth in the number of people signing up on Facebook here. From 8 million in March 2010, when it announced plans for an India office, its user base has almost doubled to over 15 million today, with a diverse spread - businessmen and students to politicians and institutions. However, comScore, a leading research company that provides marketing data and services to Internet giants globally, gives a higher estimate (see Net Gain).

"We do not have specific growth rates or comparisons with other countries, but we have seen tremendous momentum here," says Kirthiga Reddy, Facebook's Director of Online Operations and Head of India Office. Now, Facebook wants to build on this momentum and bring into its fold more mobile users and those speaking local languages. In fact, much of its future growth is likely to come from the expanding mobile user base in India. "The cellphone is extremely important to reach out to people as many do not have access to high-speed Internet. We work very closely with our mobile partners to bring the best possible services to our users," says Reddy, Facebook India's first recruit.

Reddy will not share the exact number of users who log into the site through cellphones, but it is apparent that there could be a lot of overlap at the moment between those using mobiles and computers. Given the growth in India's telecom sector, the prospect of more users relying on mobiles to access Facebook is quite likely. Reddy says, "There are more than 200 million active users currently accessing Facebook through mobile devices, globally. Compared to non-mobile users, people who use Facebook on phones are twice as active."

In a country with over 600 million cellphone users, that is good news for Facebook. Dittoes Rishtee K. Batra, Assistant Professor of Marketing at Indian School of Business in Hyderabad, an active user of Facebook: "I tend to use the mobile version more often because it provides me with quick links and gives me what I need. It is a lighter version and more basic, but that is fine as it is more user-friendly." The Palo Alto, California-headquartered company, whose CEO Mark Zuckerberg is the subject of a movie that topped the recent Golden Globe awards, is as upbeat on Indian languages.

For Internet, online media and other companies, this has been the holy grail for long - how to crack into a market for India's huge regional language-speaking population. With around 422 million Hindi speakers, followed by 83 million Bengali and 74 million Telugu speakers, as per Census 2001, the regional language market has been uncharted territory for online media so far. And the number could have only gone up in the last 10 years.

ibibo's Rahul Razdan in his office
Clearly, any move to a languages medium will also mean building platforms that can handle issues of support and readability. "Our basic philosophy is to make the site easy to use so that users really do not need help," Reddy says. Although Facebook's help centre translations do not include Indian languages yet, it is likely to happen eventually. To exemplify the user enthusiasm for the language platform, Reddy points out when Facebook opened up for translation in French, "our French-speaking users translated the site within 24 hours!" There is a similar kind of excitement here. "India has been receptive to the language tool with thousands of users contributing to the translation process."

Reddy also suggests that Facebook is working actively on encouraging developers to come up with new applications. "India's innovative and tech-savvy environment inspires us to invest heavily here, from working closely with mobile carriers to create streamlined Facebook applications, to sponsoring a developer contest." 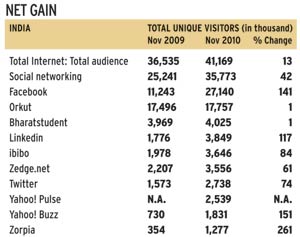 The contest, held in July 2009, resulted in a platform that allows third-party developers to develop and post applications on Facebook for developers across the world. Facebook has no data to share on the number of applications developed so far, but while calling for entries for the event, it claimed: "Facebook would become the first social networking site to showcase apps in Hindi as it calls for entries in English and Hindi to showcase web development skills in two categories of Facebook apps and Facebook Connect Integrations."

But Facebook is not alone and its rivals in India are not sitting quietly. "The way forward for social networking sites lies in differentiating and impacting people's lives," says Rahul Razdan, President, Products and Operations at ibibo, short for "iBuild, iBond", a social networking site. ibibo, too, has active plans on languages. "By March, we will have the site in half a dozen Indian languages," says Razdan, while claiming ibibo currently has 12 million active users.

Facebook could face resistance from another quarter: Orkut, the social networking site operated by Google. (Orkut has its largest following in India and Brazil, with no significant presence elsewhere.) "A large number of users are from Tier-II and Tier-III towns - they use the various localisation features on Orkut like transliteration for writing scraps (you type in English and it appears in Hindi), or even use Hinglish in English characters," says Nikhil Rungta, Country Marketing Manager, Google India, adding Orkut is the top term on mobile searches from India.

Or, take mig33, which describes itself as the first global mobile social network. The business model is around virtual economy and users pay for playing games, sending virtual gifts and other services. "mig33's business model is modelled around China's QQ Tencent and Japan's Mobagateown, which are multi-million dollar companies. India is one of the largest markets for mig33 and has shown prospects for growing even bigger," says its India operations head Mohit Gundecha. The company is building applications on mobile platforms like Mediatek and Android.

So what kind of advertising are Facebook and its competitors targeting on their language platforms? ibibo's Razdan feels it will be local media content entities, for instance, advertisements for local language TV programmes or promotion of local films. He also feels social media sites can target telcos with pan-India presence that want to reach out to new users in local languages. Local advertisers like hairstylists, cellphone retailers and music stores, who tend to advertise in vernacular newspapers, say they want to wait and watch before taking any decisions. "I will opt for it if it helps me to grow," says M Balu Chowdary, Chairman and Managing Director, Big C, a Hyderabadbased mobile retail chain, "but for that I first need to see and evaluate its success." A bigger need that Facebook would like to deliver.

The new approach to philanthropy