Today, with airline ticket prices and the BSE Sensex having switched roles, yesterday's bitter rivals Kingfisher Airlines and Jet Airways have struck a grand alliance that could also draw in Indigo and Paramount. Will it work? Or work against consumers? Kushan Mitra says that even as the airlines fight off one demon, they are faced with another: a weaker global economy.

Just before Diwali, many budget travellers had a taste of things to come when long-distance trains from Delhi to the east were cancelled. Queuing up for air tickets they got their first shock: a seat that would have been theirs for around Rs 5,000 just a few days ago was now going for Rs 20,000.

The same passenger had probably flown long-distance for Rs 500 two years ago, when India’s new, low-cost carriers made air travel possible for the common man with no-frills flexi pricing.

Remember 2003, when Captain G.R. Gopinath launched Air Deccan with some tickets priced so low that Indian Railways was fearful of losing its upper-end passengers? That was when you had several choices for every major destination? And that was also when airport security check lines were longer than a Boeing 737? So what, if in 2006, rising fuel costs forced airlines to slap a surcharge? Air travel was affordable fun.

Wingtip to Wingtip
Back in March 2003, India’s civilian aviation fleet had 138 aircraft, aviation turbine fuel (ATF) cost Rs 22,380 per kilolitre, and around 14 million passengers had taken scheduled flights in 2002-03. New players entered, fares were cut, the fleet size expanded to 350 by March 2008, and passenger count rose to 44 million—but ATF prices also shot up to Rs 47,048 a kilolitre.

Today, with airline ticket prices and the BSE Sensex having switched roles, yesterday’s bitter rivals Kingfisher Airlines and Jet Airways have struck a grand alliance that could also draw in Indigo and Paramount. Meanwhile low-cost pioneer Gopinath is seeing his brand lost in Kingfisher.

The airlines together owe the oil companies over Rs 3,000 crore and the Airports Authority of India Rs 500 crore for flight and airport charges, and have already begun cancelling aircraft orders or even returning them. 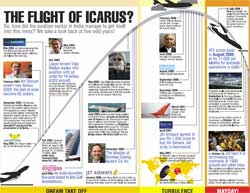 Click here to Enlarge
Visibility: Poor
So, what’s on the radar for passengers and the airlines? For passengers, it is fewer choices and back-tohigher fares, almost certainly. For the airlines, the outlook is hazy. Higher fares (or government relief on fuel prices) will help. Mergers and alliances may help them “rationalise” routes, but disparate fleets will mean high maintenance costs.

As Gopinath’s legacy fades, his partner Vijay Mallya is glad in a way. “The fares offered today are unviable,” bellows the flamboyant liquor baron who made a style statement with his Kingfisher Airlines in 2005. “Given the rise in fuel and staff costs and the weak economy, airlines need help to survive and we are glad the government is doing something about it,” he says.

Mallya and his new-found partner, Naresh Goyal, Chairman of Jet Airways, backed by Civil Aviation Minister Praful Patel, have managed to get the oil companies to give longer credit, but have failed to get all the states to cut sales tax on ATF. Only some have done so.

“States must realise that a healthy airline industry can add one to two percentage points to GDP,” Patel says.

While the grand alliance has Patel’s blessings, others question its wisdom, not least because Goyal and Mallya are not what people would call the best of friends.

Cross check
The Kingfisher-Jet alliance will create a pool of close to 200 aircraft, enabling both to reduce overlaps and cut costs. What about the passenger? Both airlines stress that the alliance is “not anti-competitive”, and in Mallya’s words, “what the survive, this alliance will help that and so, is pro-consumer.” With 60 per cent of the market sewn up between them not everybody thinks so. Tony Fernandes, CEO of Air Asia, Asia’s most successful LCC, says such an alliance will not pass muster in most parts of the world, “but times are difficult in India”.

Edgardo Badiali, CEO, GoAir, the Wadia-promoted LCC, does not rule out entering an alliance. “Yes, of course... it will make sense. But one has to find the right people who share a similar service and similar approach.” He concedes that load factors (the number of passengers divided by the number of available seats) have dropped dangerously, from 79 per cent this time last year to 59 per cent now.

Fernandes says airlines are to be blamed for creating the huge overcapacity. Compared to the preboom fleet of 138 aircraft, India’s private airlines now have a total of around 400. “If people are striking alliances and citing over-capacity as one of the reasons, let me make one thing clear—we certainly did not create that over-capacity,” Badiali says. GoAir has just five aircraft.


Fright deck
While Patel’s plans of getting a hand-out for the private carriers have been shot down, he might have to be forced to infuse capital in the state-owned National Aviation Corporation of India, the holding company for Air India. Crippled by debt, the national carrier is suffering because it can’t drop routes.

“We are hopeful that the government will give us a cash and equity infusion,” Jitender Bhargav, Director, Air India, says.

The Petroleum Ministry has told oil companies to adjust ATF prices fortnightly instead of monthly. With global crude prices dropping, and with pressure on states to cut taxes, ATF prices could drop to the 2005-06 levels of Rs 35,000 by early 2009.

But even as the airlines fight off one demon, they are faced with another: a weaker global economy. Giovanni Bisignani, CEO, International Air Transport Association (IATA), says that the impact of the global economic meltdown is already being felt at the “front of the plane” (business class seats).

Deep Kalra, CEO, MakeMyTrip, an online travel agency with a significant NRI business, says inbound bookings by NRIs are sharply down, and hotels expect bookings in winter to drop by 15-20 per cent.

The airlines might have survived the summer of discontent by getting a few concessions, but they face a chilling winter.