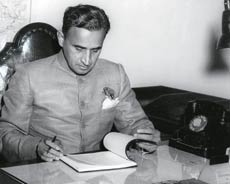 C. D. Deshmukh
C. D. Deshmukh, 1954
BOOSTER SHOT
In the backdrop of falling prices, C.D Deshmukh chose to almost double the deficit in a single year to boost the economy. The step was intended to spur development. Deshmukh explained his move as one that would be "reflationary instead of inflationary". He felt more money in circulation was necessary to put private capacity to full use. In the colonial era, the annual Budget was largely an accounting exercise. Starting with this one, India's elected Parliament began voting in Budgets with a sharper political thrust. Morarji R. Desai
Morarji R. Desai, 1967
PRAGMATIC PERFORMER
The 1960s brought two wars, devaluation of the rupee and droughts. India had to import six million tons of foodgrain in 1967, of which almost five million came as free transfers from other countries, particularly the United States. In those circumstances, Morarji Desai, in a key departure from the past, advocated nimble industrial and import policies in which frontiers of protection kept changing depending on the ground situation. Desai's views would be internalised by other policymakers later. This budget also saw an important change in personal tax rules. Any changes in direct tax structure were henceforth to be applied prospectively, instead of retrospectively, as before. Y. B. Chavan
Y. B. Chavan, 1974
EARLY REFORMER
Inflation raged, West Asia was in turmoil following the Yom Kippur war and oil prices were spiralling. In such trying times, Y.B. Chavan showed courage in lowering tax rates. Well before 'Laffer Curve' entered popular consciousness, he was convinced that punitive taxation was counterproductive as it discouraged voluntary compliance and thereby slowed tax revenue growth. He brought down the maximum marginal rate of tax by 20 percentage points from 97.75 per cent to 77 per cent. The move was to set the template for a key part of direct tax reforms in the decades ahead. 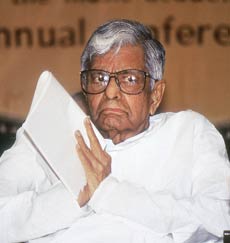 C. Subramanian
C. Subramanian, 1976
THE CONSOLIDATOR
He is remembered for the vital political support he provided the green revolution as Food and Agriculture minister. Less well known is that, as Finance Minister later, C. Subramaniam also took forward the tax reforms started by Chavan.

Even as the country was reeling under Indira Gandhi's Emergency, he lowered tax rates further, bringing down the maximum marginal rate by another 11 percentage points to 66 per cent. He scaled down wealth tax rates as well. Another change he carried out would echo over three decades later, when Vodafone fought - and won - its protracted legal battle with tax authorities over the latter's right to tax its indirect acquisition of a majority stake in an Indian telecom company. It was in 1976 that amendments in tax laws introduced the concept of source-based taxation, the basis of the government's case against Vodafone. V. P. Singh
V. P. Singh, 1985
PERPLEXING PARADOX
As finance minister, V.P. Singh is remembered for hounding top industrialists and even arresting some of them. Yet this was the same man whose 1985 Budget pushed the economic liberalisation agenda. He introduced industrial de-licensing for some industries and rationalised the personal income tax structure, pruning tax slabs from eight to four. The 1985 Budget also took a step to plug tax exemptions that had led to distortions in the economy. Singh, in this Budget, sounded early warnings about India's deteriorating fiscal health as well. Some of his observations on the limited space for manoeuvre a finance minister has on the expenditure side ring true to this day. 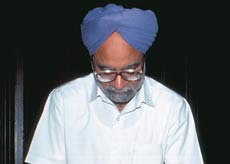 Manmohan Singh
Manmohan Singh, 1991
REVOLUTION UNLEASHED
A professional economist appointed finance minister after India had to deal with arguably its worst balance of payments crisis, Singh presided over a transformation in policy making. The baby steps on liberalisation of the previous decade were followed by bold steps in the face of a crisis.

In his first Budget, Singh announced sweeping changes in the entire spectrum of economic policy making. Fiscal tools were used to boost sunrise industries; software companies were given concessions to make them internationally competitive. Taxes on dividends and long-term capital gains were cut.

Capital market regulator SEBI was given statutory powers and private sector entry into mutual funds was allowed. Stifling controls over interest rates were reduced in phases. 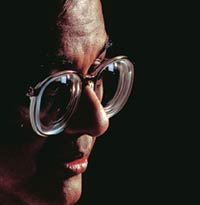 P. Chidambaram
P. Chidambaram, 1997
RADIATING CONFIDENCE
If Manmohan Singh had to present a Budget with the economy tottering, Chidambaram did so in 1997, when it was on a high, with growth having averaged seven per cent for the three previous years. Self belief underpinned the Budget proposals, which did much to open up the economy even further, while also setting the course for fiscal discipline. The most memorable feature of this Budget was perhaps the lowering of the maximum income tax rate by 10 percentage points to 30 per cent, a level that continues. The Budget created more space for foreign portfolio investment, announced that company law would be brought in sync with contemporary reality and opened the door for a public debate on ending government monopoly in the insurance industry. Chidambaram also promised to discipline the government's borrowing and followed it through. 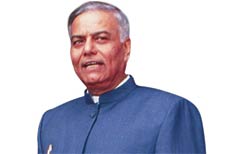 Yashwant Sinha
Yashwant Sinha, 1999
SECOND TIME LUCKY
Yashwant Sinha missed his tryst with history when he could not present a full budget in 1991, as finance minister in the short-lived Chandrasekhar government. He made up for it with the Budget of 1999, as finance minister in the National Democratic Alliance government. It was again a difficult time, with sanctions having been imposed on India for conducting nuclear tests the previous year. There was also the fallout of the Asian financial crisis of the late 1990s. None of this deterred him. Fiscal policy was used to boost two key sectors: housing and banks. Those who took home loans got significant tax concessions, catalysing a housing boom. Public sector banks were incentivised to clean their loan book through tax breaks. Sinha also set a new framework for indirect taxes by compressing the prevailing 11 slabs of excise duty into three, a template that still continues. At a symbolic level, Sinha discarded a British Raj convention of presenting the Budget in the evening, and instead did so in the morning.
TweetYoutube

Firms that recruited from engineering campuses