October 2008 is a time in his life that 63-year-old Ravubha Vaghela will never forget. After all, it is not every day that one willingly makes a Rs 7-crore sacrifice. The banker-turned-teacher-turned-realtor-turned-industrialist parted with 30 acres of prime land off the Sanand-Viramgam highway, 30 km from Ahmedabad, for Rs 1,000 per square metre - half the market price - to enable the Narendra Modi-led Gujarat government to build an approach road for the Tata Nano plant.

But for his decision, Gujarat might not have become the latest and the fastest growing auto hub in the country. "Though the state government had 1,000 acres of land for the Tata Nano project, negotiations were faltering, as there was no access road to the site. When it became clear that this could push the plant out of Gujarat's hands, I came forward to offer my land," he says.

To achieve our targets, we had to shift focus away from traditional industries with low per capita value addition. So we picked sectors such as automobiles: Saurabh Dalal
Close ties with Congress leader Shankersinh Vaghela - Modi's bete noire - did not deter Ravubha from selling his land and persuading other farmers in four villages to part with nearly 3,500 acres, so that Gujarat Industrial Development Corporation, or GIDC, could develop the auto hub. "We wanted to show how different the outlook of Gujarati farmers was from those in West Bengal," he adds in English laced with a mix of Hindi and Gujarati.

Three years later, not only is Tata Motors' Nano plant up and running, but two other global auto majors - Ford Motor and PSA Peugeot Citroen- plan to invest Rs 4,000 crore each to set up car factories in the area. The impact is already visible in Sanand and nearby villages: with the Rs 1,600 crore that farmers have got for their land, they have bought luxury cars, built big houses, bought large tracts of land at some distance from their villages, and invested the rest in the 12 new bank branches which have opened in the area in the past year. 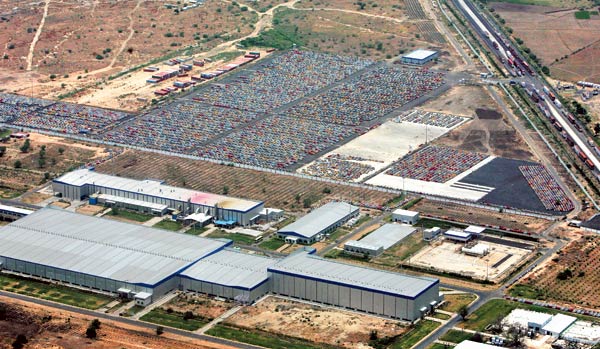 Click here to Enlarge
And there is more in store: state government officials say Maruti Suzuki , too, will build its plant near Sanand, and that the deal is likely to be sealed in October. Besides car makers, two-wheeler manufacturers are also considering expanding their operations in the area. And GIDC officials say the deluge of offers from farmers who want to sell their land is growing daily.

Gujarat's transformation into an auto hub began in 2008, with the chance marriage of a realisation and an opportunity. Unhappy with the level of value addition in terms of downstream industries and job creation triggered by large chemical, petrochemical and pharmaceuticals investments, Chief Minister Modi sought officials' views on ways to improve the situation.

You cannot afford high logistics costs if you are selling small cars, where margins are thin. Also, it can take 10 days to ship cars from one city to another: Michael Boneham: Michael Boneham
Gujarat accounts for half the chemicals produced in the country and 62 per cent of petrochemicals. Modi wanted to take the share of manufacturing in the state's gross domestic product from the current 31 per cent - the national average is 18 per cent - to 40 per cent by 2025 (the projected national target is 25 per cent). "We realised that, to achieve this target, the state had to shift its focus from traditional industries which were capital-intensive but with low per capita value addition," says Saurabh Dalal, the state's industries minister. "We identified sectors such as automobiles, where the ratio of direct to indirect employment is very high."

The opportunity came on October 3, 2008, when Ratan Tata decided to pull the Nano project out of Singur in West Bengal. An SMS from Modi, asking Tata to consider Sanand as a possible location, set the ball rolling. But it was no shoo-in: Tata Motors was considering locations in Karnataka and elsewhere.

"Fortunately for us, land was readily available, and the state's proactive governance, strong infrastructure credentials, coupled with the trust Ratan Tata had in Chief Minister Modi , swung the project our way," says M. Sahu, Principal Secretary in the state's industries and mines department. "The Tata investment clearly gave the necessary impetus and set auto investment into the state on a higher trajectory."

Speedy execution has become the hallmark of Gujarat's new industrialisation policy. Ford India, which inked a memorandum of understanding on July 28 with the state government to set up its second plant in Sanand, got possession of the land and the necessary approvals to do the bhoomi pooja on September 5. But even after Tata Motors' investment, some questions remained.

Despite Gujarat's strengths - abundant electricity, gas, water, ports with fast turnaround times - potential investors were worried about the availability of skilled labour and the auto component base. They waited to see how the Tata project evolved before taking the plunge.

"As part of the negotiation with the Tatas, we underwrote a commitment that 1,000 shop floor workers would be trained before the plant started production. "We delivered on our promise," says Sahu. "This eased the concerns of other investors." The state government has started a programme called Industry Responsive Manpower Building, adds B.B. Swain, Vice Chairman and Managing Director, GIDC.

Attracted by the investment climate, suppliers, too, are slowly heading for Gujarat. Says Harsh Goenka, Chairman, RPG group, "For us, Gujarat is fast becoming an important state to do business in. We have been able to set up our Rs 650 crore CEAT radial tyre plant in Halol in very quick time. There is no corruption and the state is definitely the number one destination as far as the business environment is concerned."

With the emergence of Gujarat, India now has five large auto hubs (see India's Major Auto Hubs). Chennai - often called the Detroit of South Asia - is the largest. In 2010/11, it accounted for 31 per cent of cars and 35 per cent of components made in the country. The others are Pune, Pantnagar, and the National Capital Region.

The competition between them is intense, and states woo investors with facilities and incentives. In an indication of just how fervid the rivalry is, the Tamil Nadu government jumped the gun in August this year, saying Peugeot had agreed to set up its factory in Chennai. The company denied it the next day, and eventually plumped for Gujarat.

We wanted to show how different the outlook of Gujarati farmers is, compared to those in West Bengal: Ravubha Vaghela
While hubs compete, they also complement each other in terms of offering auto companies scope for distributed manufacturing. A large integrated plant in one location may make for economies of scale, but certain factors force manufacturers to set up production facilities in multiple locations. India is a large country, and car buyers are scattered across the map. For instance, the National Capital Region accounts for 20 per cent of cars sold in India. Western India comes next.

Having a plant in one corner of the country increases logistics costs. It costs Rs 15,000, for example, to transport a car from Chennai to New Delhi. This was one of the main reasons Ford India chose Sanand for its second plant. "You cannot afford high logistics costs if you are selling small cars where margins are very thin," says Michael Boneham, Managing Director, Ford India. Hyundai cars at Chennai Port
"There is also time involved: it takes 10 days to ship cars from one part of the country to another." There are other reasons for multiple locations. "The concentrated power of labour in one location can be crippling, as Maruti Suzuki is realising to its horror now," says Abdul Majeed, Auto Practice Leader at  PricewaterhouseCoopers. He adds that in India, inefficiencies creep up as capacities rise beyond a point, citing the example of congestion at Chennai Port. A single production location is like putting all of one's eggs in the same basket. "De-risking is a critical element," says Majeed.

Then there are the incentives that states offer to attract investment. Pantnagar in Uttarakhand emerged as an auto hub because of central and state government incentives such as 100 per cent exemption from income tax for the first five years, 30 per cent for the next five, and 100 per cent excise duty exemption for 10 years. Two-wheeler manufacturer Bajaj Auto took the opportunity. 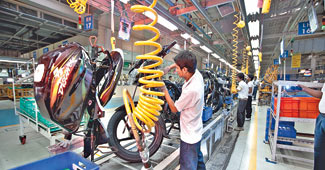 Bajaj Auto plant, Pantnagar
Our total income tax rate in 2010/11 was 25.5 per cent, as against 33.2 per cent, and the excise benefit translated into a saving of roughly three per cent on the cost of the bike," says Kevin D'Sa, President, Finance, at Bajaj Auto. The effectiveness of incentives is evident in the fact that, with the central government scrapping the excise exemption from April 2010, the flow of investments into Pantnagar has dropped.

Expensive labour and incentives elsewhere drew car makers away from Detroit. India is at a similar stage: V. Sumantran
The plurality of auto hubs compels car makers to balance distributed manufacturing with economies of scale. "A capacity of about 250,000 is the standard unit of production worldwide, and offers reasonable economies of scale," says V. Sumantran, Executive Vice Chairman, Hinduja Automotive. But, as Majeed argues, the benefits of scale in India are affected by infrastructure limitations.

Globally, multiple hubs are the trend. "In the early part of the 20th century, Detroit became the auto hub in the United States, with a strong manufacturing base and cheap migrant labour," says Sumantran. Over time, however, expensive labour and inefficient work practices, coupled with incentives from other states, induced car makers to go elsewhere: Honda chose Ohio, Mercedes went to Alabama, and BMW North Carolina. "India is at a similar stage," he says.

Ford India's Boneham says: "With the country's annual car production set to triple from the current three million units to nine million by 2020, we will definitely see more hubs emerging."