In a highly ambitious energy saving effort, the Bureau of Energy Efficiency (BEE), a statutory body under the Union Power Ministry, launched a project in February 2009 to replace 400 million incandescent lamps (ICLs) - the conventional 'light bulbs' - with compact fluorescent lamps (CFLs) across the country. It is estimated that, once achieved, this will save the country 6,000 megawatts (MW) of power, or around Rs 25,000 crore. Called the Bachat Lamp Yojana (BLY), the scheme envisages providing two CFLs - of 14 or 16 watts - which cost around Rs 70 each when bought in bulk, to every electrified household, at the highly subsidised price of Rs 15 per lamp, in exchange for two ICLs.

The price was set in a bid to distribute CFLs at virtually the cost of an ICL. Obviously, the CFL would have two more advantages: a 16 watt CFL provides the same amount of light as a 60 watt ICL, and would thus cut down the household power bill; the CFLs would also last longer, since they have a lifespan of 6,000 to 10,000 hours, while an ICL's maximum lifespan is 1,000 hours. 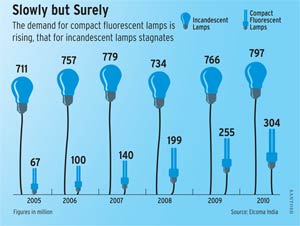 Click here to Enlarge
Ajay Mathur, Director General of BEE, has set a personal example by using only CFLs and energy-efficient light emitting diodes (LEDs) both in his office and at home. However, that is clearly not enough to propel the project. In the three years since the BLY started, only 25 million CFLs have been distributed. In the last few months, work has been almost at a standstill. "I could have been happier," says Mathur.

What went wrong? The government had intended to recover the Rs 55-odd subsidy per CFL distributed by taking advantage of a global scheme called the Clean Development Mechanism (CDM), under which developed countries - the ones that have made commitments to lower carbon emissions by fixed amounts - can buy carbon credits by funding clean energy projects in developing countries. It hoped the developed countries - as well as global financial institutions which trade on the carbon exchange - would fund the BLY to stock up on credits. What it overlooked was that the scheme was slated to end in December 2012, as a result of which, in the preceding months, the carbon market crashed, resulting in developed countries and financial institutions losing interest.

For the last few years, the price per tonne of carbon dioxide emission reduction had varied between m15 and m25 ($19.5 to $32.5). By mid-December last year it was down to m6.5. "The carbon market crash stopped all our projects because it became difficult to subsidise CFLs," says Mathur. 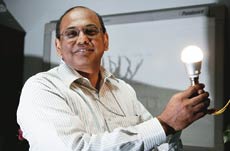 The carbon market crash made it difficult to subsidise CFLs: Ajay Mathur
However, in the nick of time, the climate conference at Durban, South Africa, held from November 28 to December 9 last year, decided to extend the CDM to 2017. The result: the market is stirring again, which may give the BLY another chance. "There was uncertainty for the past six to seven months, but prices have already started moving up and may go up further," says Ashok Lavasa, Additional Secretary in the Power Ministry.

The volatile carbon market, however, is not the only hurdle. Private manufacturers supply the lamps, which are then provided to households mostly by the distribution companies, or discoms, which supply power in different regions. Neither the suppliers nor the discoms are keen on the project, since payments in carbon credit-related projects take three to four years and that holds up subsidy reimbursement.

"There is no money in it and the scheme has remained a nonstarter," says Sunil Sikka, President, Havells India, a leading CFL manufacturer. Discoms, many of them already in the red, are also apprehensive of a scheme that lowers customers' power bills, fearing their own revenues could also be hit.

Not surprisingly, BLY has taken off only in five states: Kerala, Andhra Pradesh, Karnataka, Punjab and Delhi. Only Kerala and the city of Bangalore have so far achieved their targets. In a concerted three-month drive, Kerala replaced 13 million ICLs with CFLs, (see Solitary Beacon).

While no one faults the objective of BLY, experts have questioned the strategy of depending on the carbon market. "It can never be a stable project as long as it relies on the volatile carbon market for funding," says Suresh Prabhu, former power minister. Praful Bidwai, author of The Politics of Climate Change and the Global Crisis, is critical of the CDM itself, which, he maintains, allows developed countries to get off lightly, since reducing emissions in their own regions would cost them much more than funding clean energy projects in developing countries. "Schemes like BLY, which depend on CDM, are thus adding to the problem of global warming rather than ameliorating it in any meaningful manner," he says.

Can 2012 polls in Manipur stabilise its political economy?