The finance minister appears to have done an admirable job with limited resources, but a closer reading of the revenue estimates and expenditure plans has experts worried.
By Prosenjit Datta | Print Edition: March 27, 2016 Almost a month and a half before Finance Minister Arun Jaitley rose to present his third Budget, the government had already started sounding off the people about its main worries. In public pronouncements, Prime Minister Narendra Modi, finance minister Jaitley, and his deputy, Minister of State for Finance, Jayant Sinha, spoke increasingly about rural distress and the overall gloom and doom in the global economy. The fact that the government felt that the only way to address the issues was through increased public expenditure, especially on infrastructure, also found mention. The huge mass of non-performing assets in banks and the need to clean them up was voiced. As did the urgent requirement to boost manufacturing, create a hundred million jobs and provide a stable taxation regime.

In essence, what the Finance Minister needed to do while presenting the Budget proposals were pretty clear in the run-up to the actual speech. The question was: whether he would be able to tackle all the issues the government had identified, given that he had presented two fairly lacklustre Budgets in the past. The second question was: given the fact that the economy needed a stimulus to stay in the 7 per cent-plus growth rate, would he breach the fiscal deficit targets.

There were two schools of thought on the fiscal deficit target, both making equally cogent arguments. The first group of economists and Budget watchers insisted that staying with the deficit target was absolutely necessary, no matter how dire the circumstances, because not doing so would send negative signals to the global investors and institutions. The other school said that a stimulus to the economy that would push the country into a higher trajectory of growth, even if it meant a slippage in fiscal deficit targets, was more important. The global situation and the problems at home warranted such an action.

Eventually, the finance minister decided to stay with the 3.5 per cent fiscal deficit target for the coming year - though it will mean actually reducing government borrowing than he did in the previous year. And in his Budget speech, Jaitley fleshed out the details of his proposals, allocating huge increases in allocation both for the rural sector and for infrastructure spending. 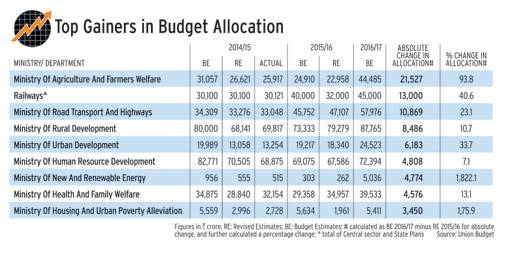 At first glance, the Budget ticked off all the right boxes and seemed to have struck just the right balance between fiscal prudence and the need to address rural distress, public spends on infrastructure and even the banking issues. He even raised the allocation for skilling of youth that would help them find better jobs. The allocation to the Ministry of Rural Development and Farmers' Welfare went up by a whopping 93.8 per cent over the revised estimates of the current year. And the allocation for roads, ports and railways was also raised. He talked of strengthening the Securitisation and Reconstruction of Financial Assets and Enforcement of Security Interest (SARFESI) Act to tackle distressed assets while promising a stable tax regime.

In short, he seemed to have done an admirable job of providing enough boost to all the key areas despite limited resources and despite operating in a bleak global economic environment. Economists and business people congratulated him on presenting a Budget that was quite unlike his first two - a Budget with a very clear direction, even if it was somewhat at variance with the overarching focus on industrial growth and manufacturing investments that the Prime Minister had talked about when he first came to power. Indeed, many political economists even said that a government that rode to victory because it was considered right wing in its politics was now taking a firm turn left in its politics, focusing more on rural areas and social schemes than on outright growth. Some even cynically pointed out that it was all about winning votes in future elections, after the drubbing the BJP got in the Delhi and Bihar state elections. Still, everybody had to admit that this was a Budget that seemed to have done the perfect balancing act in many ways - with some clear winners, but no real losers.

To understand why the Budget seems exactly right for the current moment to most observers, consider the backdrop under which it has been formulated. The global economy is in the doldrums and some experts say the situation in 2016 is worse than it was in 2008. Many countries in the EU are grappling with enormous problems. Among the BRIC countries, both Russia and Brazil are seeing their economies contract, while the Chinese economy is slowing sharply. The US is doing relatively better, but not well enough to pull the rest of the world over. Meanwhile, despite India being considered the "beacon of hope in the global economy" by the International Monetary Fund (IMF), domestic manufacturing companies and even services companies are in a bad shape with overcapacities in many sectors and too many firms plagued with enormous debt problems. These factors are unlikely to help India get too many big projects on the ground in the short run. High investments in manufacturing that will put the country in a higher growth trajectory, therefore, seem somewhat distant. And, with the global economy not doing all that well, a services-export-led high growth also seems unlikely in the near future.

On the other hand, boosting domestic consumption through higher incomes in both rural and urban areas seem a better bet in the very short run. At any rate, rural incomes have been squeezed by two successive bad monsoons and that is affecting demand in a host of industries. The rural economy as it stands now is clearly unsustainable - as Subhashis Gangopadhyay points out in the Busniess Today panel discussion on the Budget (see page 36). The rural thrust of the Budget would help put more money in villages, which is important to spur demand given that 57 per cent of the country's workforce is dependent on agriculture in some way or the other.

Meanwhile, with the implementation of the 7th Pay Commission, and One-Rank-One-Pension for the armed forces, the government could expect at least some of that money coming back into the economy in terms of both savings and demand.

Finally, the spending on roads would create direct and indirect jobs and boost demand in industries, such as cement and steel, apart from the overall beneficial effects of better infrastructure in manufacturing and services competitiveness. Other boosts could be given to manufacturing companies through non-Budgetary methods - mainly laws such as GST and Bankruptcy Code, and through improving ease of doing business. The Budget does not have to make any special provisions for boosting manufacturing industries - though the finance minister did announce a corporate tax of 25 per cent as opposed to 30 per cent for new manufacturing companies, provided they do not take any other incentive.

In all, the perfect way to handle the economy until the global economy improves enough to help the services and manufacturing industries as well.

While the economic logic seems perfect, a closer reading of the revenue estimates and the expenditure plans of the government is beginning to worry at least some economists. In some ways, the arithmetic does not add up. And in others, the estimates for revenue seem overenthusiastic. For example, the fact that there is no explicit mention of the estimated `1 lakh crore that has to be shelled out for the implementation of the 7th Pay Commission in the Budget papers is beginning to worry quite a few economists. Then again, the revenue calculations for taxes and disinvestment seem a tad overoptimistic given the results of last year. And finally, as some economists point out, the allocation on rural areas is impressive, but it has also been boosted by shifting interest subvention from the finance ministry to the agriculture ministry.

Also, too many of the calculations are based on excellent implementation - something that has not been the forte of many ministries.

How well the current Budget stands up to the test of time will be apparent quite soon - as soon as six months down the line.

All Budgets see some ministries gaining a lot in terms of allocation, while others lose out. At fi rst glance, the winners seem apparent enough. Agriculture, rural development and infrastructure seem to have gained a lot in this Budget. A closer examination reveals a more nuanced truth. While infrastructure has been the focus of the government from the fi rst Budget, the current spends on agriculture and rural development look excellent only if one does not consider that these ministries saw their spends decreasing in the fi rst two Budgets, despite the two consecutive bad monsoons. And, after one accounts for the interest subvention, the new money to be spent on villages and agriculture seems far less generous than in the past. Similarly, on paper, the Petroleum and Natural Gas ministry seems to have seen the biggest cut. But that has been so because the government has been lucky with crude prices - still at an all-time low. That has allowed the government to slash the subsidy bill for petroleum. On the other hand, Primary Education and Women and Child Development have certainly lost out.

A Guide to Gold