The Thunderbird conference room on the eleventh floor of Ford Motor Company's headquarters in Dearborn, a suburb of Detroit, United States, is windowless. It has a large wooden circular table at the centre and three big video screens. It is here CEO and President Alan Mulally holds his business plan review meetings every Thursday. These meetings have become legendary in business circles for Mulally's unique management style, which involves making his top managers submit colour coded charts detailing their progress. But what is less known is how frequently India figures in the discussions there. "Every time.

Not a meeting goes by without India coming up for some reason or the other," says Mulally.

One reason is the Indian subsidiary Ford India's success: riding on the success of its compact car Figo, it has trebled its market share in the last three years, from 1.5 per cent in 2009/10 to 4.5 per cent. With the Indian car market estimated to grow from 2.3 million vehicles in 2011 to nine million by 2020, Ford expects India to become its third largest market after the US and China by then. In the last four years, India has seen the largest ever investment the carmaker has committed in any country in recent times, $1.7 billion (Rs 8,500 crore) in the last four years - marginally higher than $1.6 billion earmarked for China in the same period.

But there are also other reasons why Ford India has captured the imagination of Ford's top executives. The Indian arm is fast changing the way Ford works. The global parent's Corporate Blue Book is full of innovations from India which other regions are replicating.

In the 100 years of Ford's manufacturing history, petrol and diesel engines had never been made on the same production line: the two power trains have very different manufacturing standards. "When we conceived the engine plant at Chennai in 2008 the dilemma was whether to make petrol engines or diesel ones," says Michael Boneham, President and CEO of Ford India. "The signal from the market was unclear. We proposed a flexible plant that would help us switch to either power train depending on demand. It also brought in economies of scale."

It took much persuasion to get the parent company to agree. But the decision proved prescient. From early last year, there has been a sudden surge in the demand for diesel engine cars in India. In February 2011, Ford India's ratio of petrol cars manufactured to diesel was 70:30. By November this had been reversed. "Had we not done that earlier, we could have been caught in the wrong foot like other players," adds Boneham.

Ford Motor has now made it mandatory for all new engine manufacturing facilities - including the one Ford is building at Sanand, Gujarat - to have flexible lines. Next, Ford India brought flexibility to Ford Motor's assembly line. Traditionally at Ford's US facilities, each assembly line produced a single product, but the need to keep costs low called for a departure by the Indian arm. It began testing and deploying sensors and robots that could do part of the job of identifying different models, and then welding or assembling them accordingly on the same assembly line. The manufacturing line at the Chennai facility is capable of handling six models at any given time. "This step enabled us to build numerous models, both for India and for export, and yet keep our inventory low," says Tom S. Chackalackal, Executive Director - Manufacturing, Ford India.

It was not as easy as it appears. At first, human error proved a hurdle. Ford India manufactures a staggering 600 different vehicle variants - there are 530 variants of Figo alone - and 15 variants of engines. The sheer glut of components was tough to cope with, and sometimes a component meant for a particular variant ended up in another, leading to product failures, production delays and considerable wastage. Ford India then began to work on ways to automate component selection totally. "We worked with Indian IT vendors and came up with a kitting solution which identified parts for each variant," says Chackalackal. "This reduced defects by 95 per cent." Similarly the 'kitting' has been implemented at Ford's factory in South Africa and will soon be part of the manufacturing process at its other units as well.

The small car push
Another of Ford India's achievements was adapting a particular technology - called the '3 Wet High Solid Paint Technology' - to cars.

Ford Motor had developed it and was piloting it at one of its truck lines, but it had never been tried on cars. Ford India adopted it while expanding its Chennai facility in 2009. "It reduced our fuel utilisation on the manufacture of each car by 30 per cent," says Boneham. "The process eliminated one baking cycle and reduced emissions by over 20 per cent. It also cut our water consumption sharply." Today, Ford India's water consumption per car at 1.18 kilolitres is the lowest among Ford's operations worldwide, and is a benchmark for all other facilities.

The analytical skills of our Indian employees made us shift material handling and logistics operations to India: Joe Hinrichs
The effort to price the Figo - the most affordable car Ford Motor has ever built - correctly saw Ford India working with its suppliers to eliminate over-engineering, while at the same time optimally engineering the components. "With its success the bill of material of Figo has become the benchmark for any B car that Ford manufactures globally," says John Lonsdale, Vice President, Product Development, Ford India.

Cars are segmented alphabetically, depending on size: 'B' and 'C' categories are the compact ones. "With the B and C segment accounting for 60 per cent of the new cars sold across the world, India has become the leading indicator of what people want," says Mulally. "Indian customers want the best quality, high fuel efficiency and safety at best value. These parameters have now become the pillars of design for the entire Ford family."

Ford India is also taking over critical global operations for Ford Motor. A team of just 197 employees at the Chennai facility controls the entire material handling and logistics operations of the global parent for the Asia Pacific and Africa (APA) region. This means taking charge of close to a million cars, involving 31,000 parts worth $500 million and freight payments of over $1 billion. "The Chennai unit coordinates with 2,000 suppliers located in 45 countries in the APA region, Europe and the Americas to ensure that every component reaches the right place in time,'' says Joe Hinrichs, Group Vice President and President, APA. "It was primarily the analytical skills of the Indian employees that made us shift such a critical operation to India." The team, whose unit has been designated the Centre of Excellence in Material Planning and Logistics, may gradually take up European operations too.

The Past, the Future
Success in Asia has come late to Ford Motor. Until as late as 2007, it was floundering. It entered China late and compounded the mistake by launching models that were not right for the market. It was the first of the big, global auto makers to enter India - in 1996, investing $450 million in the Chennai plant to manufacture 100,000 cars a year - but even a decade later it was using less than half that capacity. Its share of the fast growing Indian car market was minuscule. In comparison, Korean car major Hyundai, which also entered India the same year, had become the second largest car maker in the country and made India its hub for compact cars, exporting them to over 100 countries. 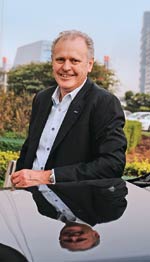 If we had not had a flexible engine plant, we would have been caught on the wrong foot like some other players: Michael Boneham
Mulally, who took over in September 2006, found Ford's Asia policy bizarre. One of his first steps was to convene a meeting of 300 top executives at Dearborn where he displayed two pie charts that divided car sales by geography and size. Ford was hardly present in two important segments - Asia and compact cars.

Mulally began by moving Hinrichs - seen by many as a possible contender for the CEO's job after Mulally retires - to head the APA market. Despite the financial crisis of 2008, he next convinced Ford's board of directors to invest another $500 million in India to double the capacity of the Chennai plant, build engines and develop a compact car there. The result was Figo, launched in September 2009, and its success enabled Hinrichs to get the board to agree to invest a further $2 billion in the APA region. Half of it is being spent on the new facility at Sanand. "Ford had never committed to this sort of investment before," says Hinrichs. "But Figo enabled us to show what a small car can do for the Ford brand in the APA market."

Once the Sanand plant is fully operational in 2013, Ford India will have a cumulative capacity to make 440,000 cars and 610,000 engines annually, and will be the export hub for compact cars. It already employs around 10,000 people. "We will increase this by another 50 per cent," says Mulally. "India is absolutely critical for Ford Motor.''